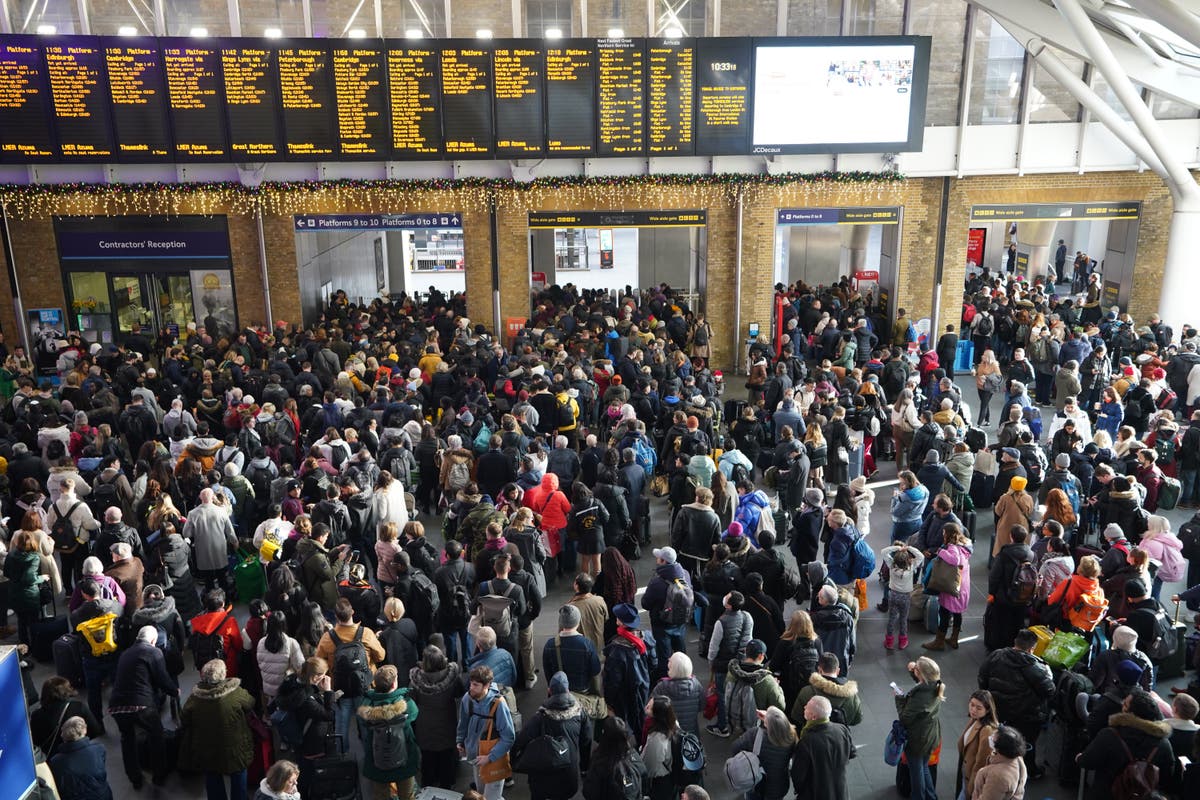 ravel disruption is expected across railways again on Wednesday, with many commuters returning to work following the Christmas break, as industrial action by rail workers continues.

Members of the Transport Salaried Staffs’ Association (TSSA) at Great Western Railway will walk out from noon to 11.59am on Thursday, and at West Midlands Trains for 24 hours from noon until the same time on Thursday.

Meanwhile, unions are looking at ways to stage further strikes by splitting ballots by job titles rather than holding a single vote, according to reports.

It comes after a day of travel chaos despite a rail strike by the Rail, Maritime and Transport Workers’ Union (RMT) coming to an end, with crowds of people left waiting at major train stations across London and many journeys delayed due to the late handover of engineering works.

West Midlands Trains said that none of its services would be running from Wednesday morning as a result of the TSSA strike.

Passengers have been told to prepare for “significantly disrupted” travel into the new year amid the wave of industrial unrest sweeping across the country.

Network Rail issued the warning amid a series of long-running disputes over pay and working conditions.

The i newspaper reported that the TSSA is poised to let different sections of its membership vote at different times in order to carry out multiple walkouts per week.

A spokesperson told the paper: “Rather than balloting everybody in one single ballot, our intention is to split the ballot so that we can ballot station staff separately to controllers, for example. Which would give us greater flexibility in when we can call people out for strike action.”

A Department for Transport spokesman said: “After two years of virtual Christmases, the British public deserve better than to have their festive celebrations impacted by strikes.

“The Transport Secretary and rail minister have worked hard to facilitate a fair and reasonable offer, which two unions have accepted, and it is incredibly disappointing that some continue to strike.

“We urge them to step back, reconsider and get back round the table, so we can start 2023 by ending this damaging dispute.”

On Tuesday, TSSA organising director Nadine Rae said: “Our members at CrossCountry do not want to strike, especially over the Christmas holiday period, but they are sick and tired of being taken for granted.

“They deserve a pay rise to help manage the escalating cost of living, and they rightly demand job security.

“The company, like all the train operators under the control of the Department for Transport, need to face up to the fact that only serious offers which meet our aspirations will end this dispute.”

How much DC region homeowners who sold in 2022 made

Are YOU washing your face wrong? Top dermatologists reveal…

Exclusive for Mail on Sunday readers: Tour the gardens of…