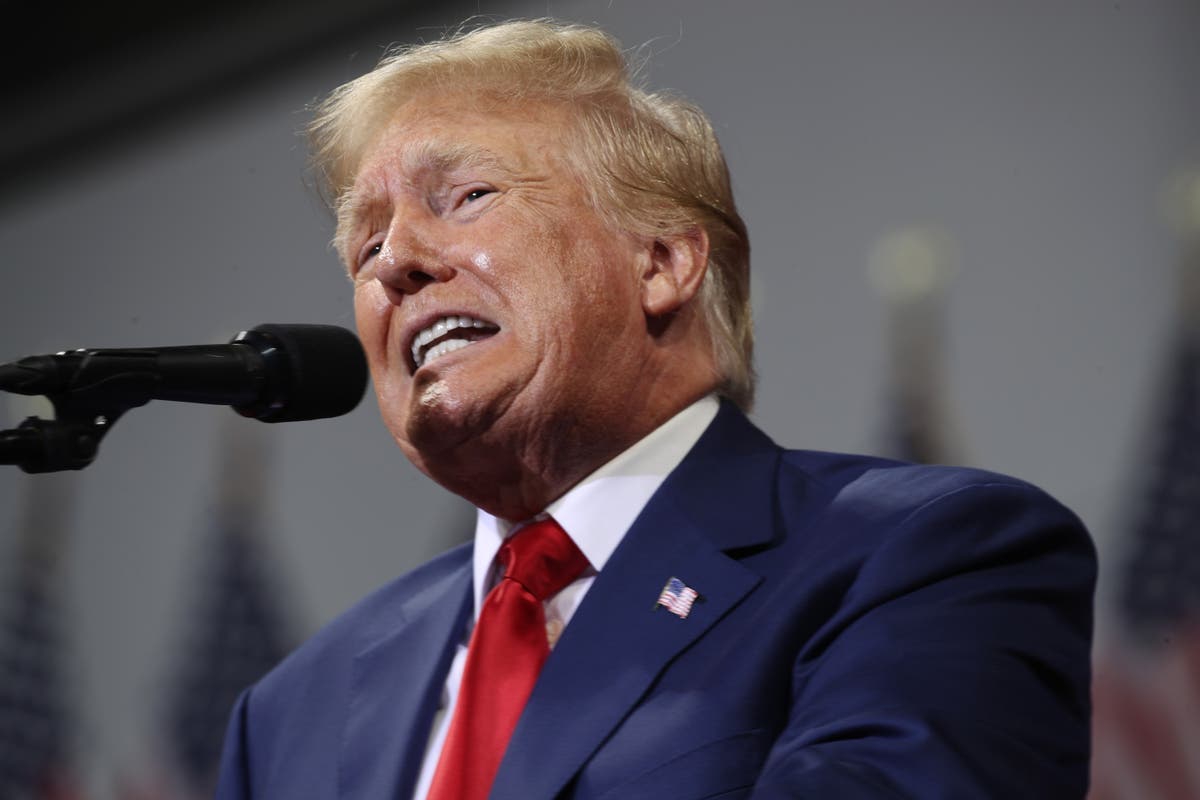 The Department of Justice is appealing Judge Aileen Cannon’s ruling regarding appointing a special master to review the classified documents seized during the search of Donald Trump’s Palm Beach residence.

The former president’s legal troubles continue to mount as a Washington DC grand jury empanelled to investigate the January 6 attack on the US Capitol and attempts to overturn the 2020 election has broadened its efforts by asking for information about his political action committee, Save America.

Meanwhile, key Trump ally and far-right agitator Steve Bannon has surrendered himself to New York state prosecutors as he faces a new criminal indictment. The case is believed to relate to fraud charges stemming from a fundraising entity, We Build The Wall. The former president pardoned him when he faced federal charges on the matter, but had no power over state-level prosecutions.

Mr Trump paused from ranting on Truth Social about the “perverts and lowlifes” at the Lincoln Project to pay tribute to Queen Elizabeth II who passed away on Thursday afternoon.

The former president also hailed the new monarch, King Charles III, in a post proclaiming he would be a “Great and Wonderful King” and “an inspiration to everyone”.

The Department of Justice has asked the 11th Circuit Court of Appeals to reverse a Trump-appointed district judge’s order requiring a halt to use of materials seized during the 8 August search of former president Donald Trump’s home in any criminal investigation.

Andrew Feinberg has the latest.

The Department of Justice has asked the 11th Circuit Court of Appeals to reverse a Trump-appointed district judge’s order requiring a halt to use of materials seized during the 8 August search of former president Donald Trump’s home in any criminal investigation.

In recent days, President Joe Biden has sharpened his attacks against Donald Trump and the so-called MAGA Republicans for posing a threat to democracy. He’s likened the philosophy undergirding the dominant strain of the modern-day GOP to “semi-fascism.”

And Democrats are taking notice.

The gloves-off, no-holds-barred approach from Biden as of late has emboldened Democrats across the country, rallying the party faithful ahead of the November elections even as his harshest rhetoric makes some vulnerable incumbents visibly uncomfortable.

In recent days, President Joe Biden has sharpened his attacks against Donald Trump and the so-called MAGA Republicans for posing a threat to democracy

Poll: Americans agree with Biden, Trump is a threat to democracy

President Joe Biden believes that Donald Trump and his allies in the GOP are a threat to the country, and democracy. According to a new poll, a majority of Americans agree.

The findings came in a Reuters/Ipsos poll, published on Thursday.

John Bowden takes a look at the survey results.

Hillary Clinton has said that she doesn’t understand how former President Donald Trump could have taken secret documents to Mar-a-Lago.

Gustaf Kilander and John Bowden report on the former secretary of state’s comments.

Clinton reveals classified papers came to her in handcuffed briefcase

‘I don’t understand how he was permitted to take them even to the [White House] residence, let alone to a country club in Florida’

Trump says ‘everyone wants him’ to run for president in 2024

Donald Trump says that “everyone wants me to run again” but has ruled out having daughter Ivanka on any 2024 ticket.

The one-term president told India’s NDTV in an interview that he would not consider his daughter as his vice-president candidate, if, as expected, he runs again for the White House.

Mr Trump has been publicly flirting with taking on Joe Biden again but has yet to formally announce his candidacy.

‘Ivanka? My daughter? Never thought of that one. I’ve never even heard but that’s an interesting idea,’ ex-president told NDTV

‘There was nobody like her!’ says Trump in reaction to Queen’s death

Donald Trump “truthed” his reaction to Queen Elizabeth II’s passing on Thursday, minutes after the news was announced by Buckingham Palace.

The former president, who met the Queen in 2019, commented on the Queen’s “generous friendship, great wisdom, and wonderful sense of humor”, adding that she was a “beautiful lady”.

John Bowden reports on his tribute.

Trump reacts to Queen Elizabeth’s death: ‘There was nobody like her!’

McConnell asked to comment on Trump’s attacks on his wife

Mitch McConnell declined to share his thoughts on former President Donald Trump’s attack on his wife Elaine Chao, who served as Mr Trump’s secretary of transportation.

Steve Bannon, the former White House chief strategist who was convicted on two counts of criminal contempt of Congress earlier this year, has been charged with money laundering, conspiracy, and scheming to defraud supporters of Donald Trump who thought they were funding a border wall along the US-Mexico border.

Bannon, who currently hosts the War Room podcast and show on the right-wing Real America’s Voice network, arrived at the Manhattan district attorney’s office on 8 September to surrender. As he entered the building, he shouted “they’re persecuting people!” to a group of reporters who’d gathered to witness his arrival.

Rick Scott of the Lincoln Project said he welcomed former president Donald Trump’s threats to sue the group of former Republican strategists who have released ads that sharply criticised him.

Mr Trump threatened legal action on his social networking platform Truth Social over a new ad, which aired on a local Fox affiliate and not Fox News proper.

‘Go for it b****!’: Lincoln Project launches fiery video at Trump after legal threat

’We’re delighted by the thought you would try to sue us, Donald’, the former Republican operative says

‘See you all in Court!’: Trump threatens lawsuit against Fox News over Lincoln Project ad

Donald Trump threatened legal action against Fox News on Thursday in response to an ad from the conservative Lincoln Project.

The former president wrote on Truth Social, his social media platform, that he would see the network and, apparently, the Lincoln Project “in Court” and blamed them for supposed “false advertis[ing]”.

John Bowden has the story.

Ex-president lashes out after ad appears on local TV station

Want to retire at 50? How to cut your cost of living, by Ireland’s most devoted savers

Maura Healey cruises in Democratic primary for Massachusetts governor, will be heavy favorite in November