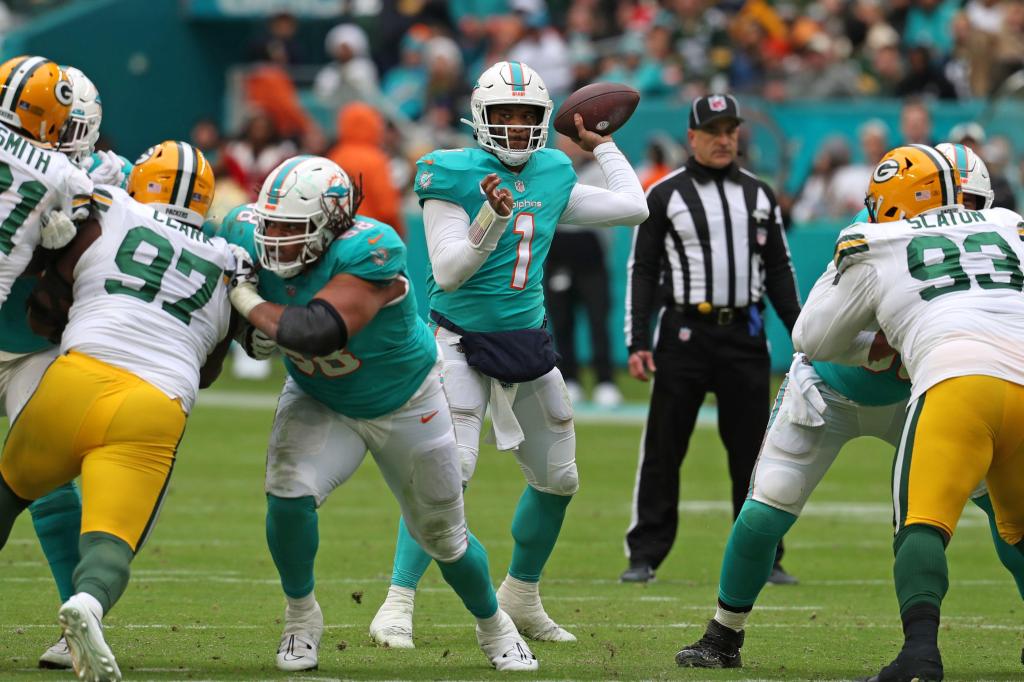 He entered the room with a heavy heart, yet he forced nodded a small greeting. He even had something to say before the hard questions came.

“Merry Christmas,” he said to reporters.

A gentleman doesn’t forget his manners, no matter how bad a day he’s had. And Sunday was a bad day for the Miami Dolphins quarterback by any football definition. Three interceptions in the fourth quarter. No points in the second half. A fourth consecutive loss that has the Dolphins (8-7) stumbling to the playoffs — if they even make it there.

A few minutes earlier, coach Mike McDaniel had condensed the 26-20 loss to the Green Bay Packers (7-8) down to untimely penalties and the Dolphins’ four turnovers to Green Bay’s one. That sounded about right.

“The percentage of turning the ball over — what were we, minus-three?” McDaniel said. “Yeah, you’re not going to win the ball game.”

Now Tagovailoa stood in the same spot underneath Hard Rock Stadium and went through the interceptions now, one by one, wound by fresh wound. They didn’t start the Dolphins bleeding Sunday. That came when running back Raheem Mostert fumbled at midfield just after the two-minute warning before halftime and a Dolphins’ 10-point lead — and possibly more — was cut to seven points at the half.

But Tagovailoa’s interceptions, one after another, decided Sunday and muddied the neverending question to this Dolphins era: Who is Tagovailoa? Can he be a franchise quarterback? What’s the ceiling to his talent?

This disastrous December isn’t just the kind of stretch that can define quarterbacks. So are the endings to these games. Tagovailoa only had five interceptions entering Sunday. Now he added three in the fourth quarter when the day demanded more.

“On the first one, I tried to throw it over a defender, but I ended up really throwing over the defender and Tyreek [Hill], so that one got away,” he said.

One play earlier, Dolphins cornerback Kader Kohou intercepted Green Bay quarterback Aaron Rodgers in the end zone. Rodgers now got the ball back at the Dolphins 14-yard line. He’d just get a field goal from a Dolphins defense that did enough to win Sunday. But that gave Green Bay the lead for the first time Sunday, 23-20.

“The second one, I might have said the wrong play,” Tagovailoa said. “I’m not too sure. But there was just some communication errors on that.”

Mostert took the blame. He kept running a seam route, he said, rather than break it off like Tagovailoa expected. Either way, Packers linebacker De’Vondre Campbell returned that interception to the Green Bay 36. Rodgers led a 56-yard drive ending in another field goal with just over two minutes left.

Tagovailoa led the offense out then knowing a touchdown still won the day. He completed a short pass, then badly underthrew Mike Gesicki right to Green Bay safety Rasul Douglas.

“The third one was just not a good ball for my receivers to have been able to make a play on that,” he said. “You know, it’s tough. You get an opportunity to play on Christmas Day against a really good team, and I go out there and really — not being able to put my best foot forward for our team.”

You can look elsewhere, if you want. You can wonder why the Dolphins ran seven times for 56 yards in the first quarter but just 11 times for 26 yards after that. You can point to penalties with none bigger than an illegal formation by Jaylen Waddle that negated a 15-yard catch by him to the Green Bay 10-yard line. A play later, Tagovailoa threw his second interception.

Tagovailoa had a big first half with 229 yards passing and an 84-yard touchdown pass to Waddle. But sometimes NFL games aren’t decided by the best plays. On the other side, after all, Rodgers completed 24-of-38 passes for 238 yards, a touchdown and the interception. Not great, especially by his four-time MVP standards.

Sometimes winning a game comes down to not losing it. Rodgers didn’t lose it. Tagovailoa did.

“Just very unfortunate,” Tagovailoa said. “It was just terrible how everything ended. Like I told the guys, ‘That’s on me.’ I will definitely get better from that.”

“Merry Christmas,” Tagovailoa said to reporters as he left. “Spend time with your families.”

He didn’t forget his manners Sunday, no matter how badly the day went for him.