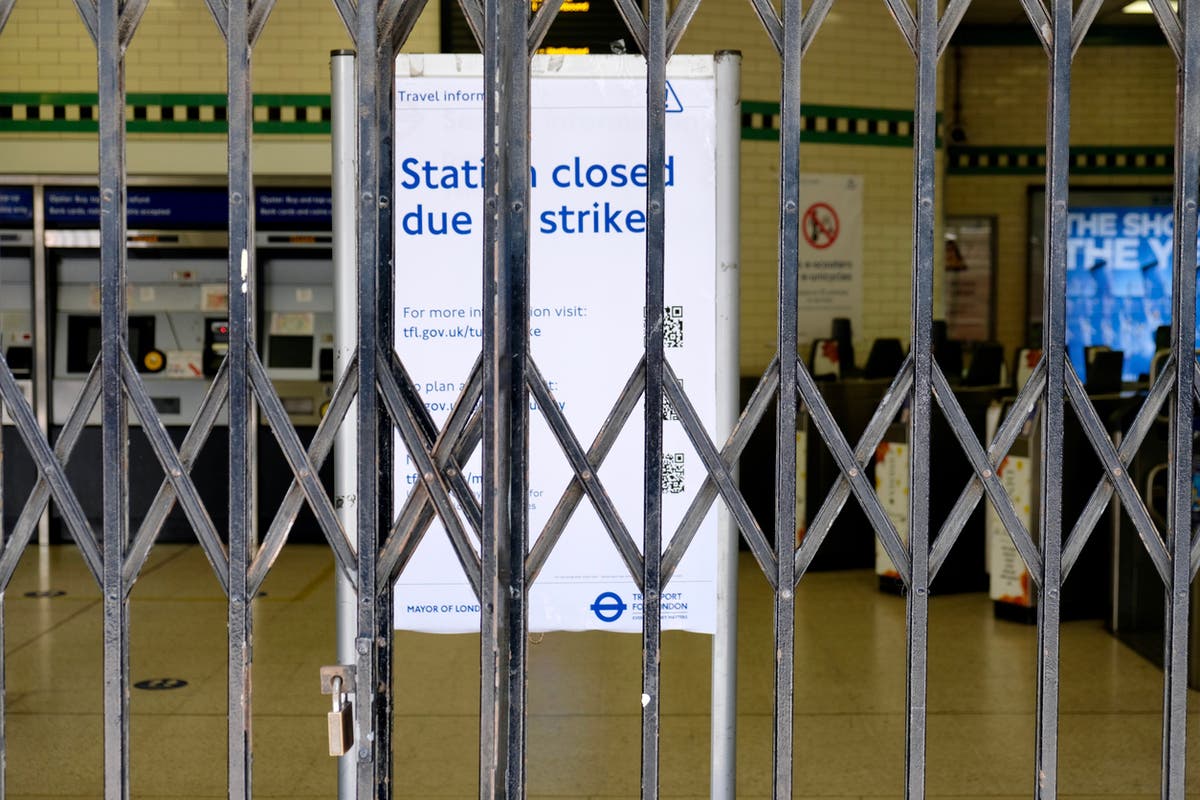 After the chaos of yesterday’s train strikes, new industrial action by London Underground, Overground and bus drivers is set to shut down much of London’s transport network on Friday

The 24-hour tube strike today will see members of the RMT Union working for London Underground walk out because of an ongoing dispute over jobs and pensions.

Around 10,000 Tube workers in the union are expected to strike, causing major disruption to TfL’s network. Early this morning, only the Northern, Central, District, Elizabeth and Overground lines saw an extremely limited service on certain branches.

Another rail strike is scheduled for tomorrow with union bosses warning they will continue “for as long as it takes”.

The London Underground strike is sandwiched between two national rail strikes, in the most serious collapse of normal train services for three decades.

In addition to the rail chaos, writes Simon Calder in his weekly travel newsletter, airline and ferry passengers are facing severe problems. The transport secretary, Grant Shapps, is the obvious person to intervene.

“As the fortunes of travellers dwindle, we need urgent action from the minister in charge. Mr Shapps, though, is prioritising registering and licensing cyclists. As recently as 2018, a thorough study about such a bike scheme concluded: ‘The costs and complexity of introducing such a system would significantly outweigh the benefits.’

“The transport secretary might want to pay heed to the report, because it was conducted by his very own Department for Transport.”

The Independent’s Jon Stone has written: “Grant Shapps, with both eyes on his own political future, is throwing a little bit of anti-cycling meat out for the Tory press before the new prime minister comes in. It is a pitch to keep his job, essentially.”

Many people who usually use the Tube to get around London will be hoping to catch a city bus instead. However, there is also a bus driver strike today and tomorrow (19 and 20 August),

Around 1,600 bus drivers who are members of the Unite union and employees of London United are involved in the 48-hour walkout, on top of the RMT Tube workers strike and London Overground strike.

Bus services will be disrupted in west and south west London and parts of Surrey on both days.

Read more on which services are affected here:

When is the London bus strike and which routes are affected?

“Strikes will affect your journey 18 and 21 August,” they said.

On the chart, a red dot = no service / severe disruption – avoid travel.

Green dot = check before you travel.

It shows disruption expected on the Overground, DLR, Elizabeth line and London buses into mid-morning on Sunday.

National Rail: Disruption between London Paddington and Heathrow expected until 10.30

National Rail enquiries has alerted train passengers that services between Paddington and Heathrow Airport remain disrupted, and will be until mid-morning, due to a signalling issue.

Which lines are running this morning?

Though most TfL lines are out of actions as of 8am Friday, there are a few with a reduced service.

The Elizabeth line is seeing trains, albeit with “severe delays”.

On the Northern line, a reduced service is operating between Golders Green and Edgware and between High Barnet and East Finchley, with trains approximately every five minutes.

On the Central line, a reduced service is operating between White City and West Ruislip / Ealing Broadway; between Liverpool Street and Hainault via Newbury Park; and between Leytonstone and Epping with trains approximately every 15 minutes.

On the District line, a reduced service is operating between West Ham and Upminster, approximately every 15 minutes.

On the London Overground, a reduced service is operating between Highbury & Islington and Clapham Junction/New Cross/Crystal Palace and West Croydon only.

Transport bosses have been telling passengers not to travel unless necessary.

“Customers are advised to avoid travelling on the Tube and only travel on the rest of the TfL network if essential,” Transport for London (TfL)said in a statement.

There will be “severe disruption” on all lines with little to no services throughout the day and no Night Tube.

A coordinated bus strike will also see some services out of operation.

National Rail services will not operate as normal.

A bike company is helping Londoners avoid commuter chaos by offering them a free bike on strike days.

During today’s walkouts and into the weekend, Swapfiets will be lending commuters a free bike to use for up to seven days.

Thursday and Saturday see nationwide industrial action across Britain’s railways, while on Friday the capital will grind to a halt amid London bus and Tube walkouts.

Worried about whether your train will run? Caught up in some of the summer holiday chaos as travel resumes at scale? Messed around by an airline or holiday company? Concerned about the reported demise of those ultra-low £10 air fares? Or simply after some inspiration for a winter getaway?

Our expert Simon Calder will be on hand on Friday 19 August to answer all your questions in an ‘Ask me anything’ event between 4 and 5pm. He will be answering live in the comments section below.

Network Rail chief executive Andrew Haines has dismissed questions about his £590,000 salary, as tens of thousands of railway workers go on strike over pay and conditions.

A BBC Breakfast reporter on Thursday highlighted Mr Haines’ recent pay rise from £544,000 to £590,000, saying: “It’s a huge amount of money to people listening to this. How do you defend that?”

Mr Haines responded: “What happened was I took a

pay cut the previous year, so my salary this coming year will be exactly the same as in 2018.

‘I really understand why people are worried about cost of living,’ says railway chief

Pay dispute will continue ‘for as long as it takes’, union bosses warn

Rail union leaders have warned the long-running dispute over pay, jobs and conditions will continue “for as long as it takes” as travel chaos continues for a second day.

Tens of thousands of members of the Rail, Maritime and Transport union (RMT), Transport Salaried Staffs Association (TSSA) and Unite walked out yesterday, affecting Network Rail and train operators across the country.

Another strike will be held on Saturday while RMT members on London Underground and London Overground, and some bus drivers in the capital in Unite are on a strike today,

Manuel Cortes, TSSA general secretary has said he hopes “common sense will now prevail” and the demands of the unions will be met.

“But for this to happen, Grant Shapps must either come to the table or give train operators the mandate to negotiate and break this impasse.

“Unless a negotiated settlement which is acceptable to our members is reached, this dispute will continue for as long as it takes.”

A fresh strike by unions caused travel chaos on Thursday.

Former Bihar MLA, a dreaded Mafia who was on the run for two decades arrested near India-Nepal Border