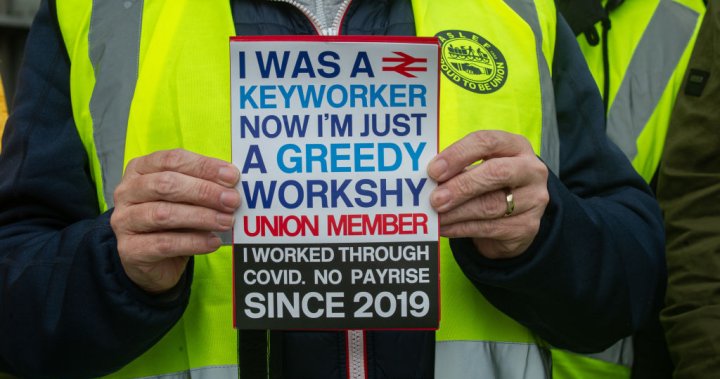 Britain‘s RMT union said on Sunday that it had rejected a pay rise offer of 4% in 2022 and 2023 from train operators aimed at heading off further strike action, which has disrupted travel for millions of rail users.

The RMT said last week that more than 40,000 railway workers would stage strikes over December and January in a long-running dispute over pay, signaling travel disruption before and after the busy Christmas holiday period.

The Rail Delivery Group, which represents train operators, had earlier offered the National Union of Rail, Maritime and Transport Workers a pay rise of 8% over two years with a guarantee of no compulsory redundancies to April 2024.

Latest strikes bring most U.K. trains to a halt: ‘It’s difficult for the public’

“We have rejected this offer as it does not meet any of our criteria for securing a settlement on long term job security, a decent pay rise and protecting working conditions,” RMT General Secretary Mick Lynch said in a statement.

Responding to the issue, British Transport Secretary Mark Harper said in a statement, “The situation is incredibly disappointing, and unfair to the public, passengers and the rail workforce who want a deal.”

“This deal will help get trains running on time,” he added.

Rail workers in Britain have staged several strikes this year, including the country’s biggest strike in decades during the summer, pressing demands for better pay during a cost-of-living crisis.

Businesses and train companies warned of travel disruption in the run-up to Christmas from the strikes. The British Beer and Pub Association (BBPA) has said the week of the strikes planned for December is usually the year’s busiest for the pub industry.


(Reporting by Kanjyik Ghosh in Bengaluru; Editing by Alexander Smith and Daniel Wallis)

A fridge too far? Living sustainably in NYC by unplugging appliances