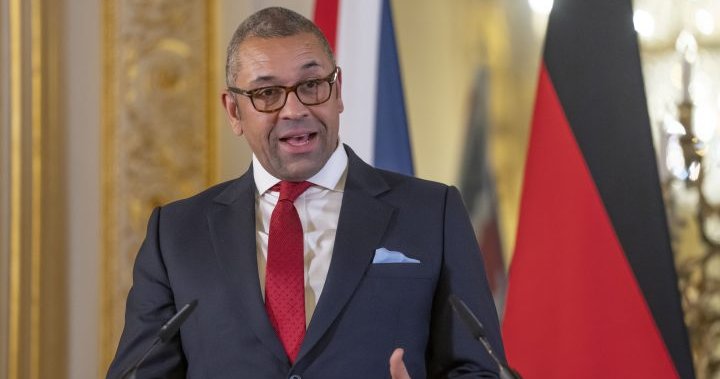 British Foreign Minister James Cleverly on Tuesday said the NATO allies are boosting arms supplies to Kyiv to demonstrate their determination to see Ukraine prevail against Russia, which should end the war now and open negotiations “in good faith.”

Should Canada send Leopard battle tanks to Ukraine? ‘Not there yet,’ says Trudeau

“The message we’re sending to (Russian President Vladimir) Putin and frankly to anyone else that cares to be watching is that we made a commitment to support Ukrainians until they are victorious,” Cleverly told a forum at the Center for Strategic and International Studies in Washington.

Cleverly spoke to the U.S. think tank ahead of meetings with Secretary of State Antony Blinken and other top U.S. officials on increasing support for Ukraine as the war ignited by Russia’s invasion nears its 11th month.

He was to travel to Canada for similar discussions after his Washington visit.

Cheverly’s trip follows Britain’s announcement during the weekend that it will supply Ukraine with 14 Challenger 2 main battle tanks – the first modern Western tanks to be promised to Kyiv – and other heavy weaponry.

That decision came after France, the United States and Germany announced they were providing armored vehicles and other arms to Kyiv.

The British decision has intensified pressure on Germany to send Leopard 2 tanks to Ukraine. But Berlin says such tanks should be supplied to Ukraine only if there is agreement among Kyiv’s main allies, particularly the United States.


Now is the time to step up military aid to Ukraine because Russian forces are “on the backfoot,” said Cleverly, referring to Ukrainian drives since last summer that have retaken more than half of the territory seized by Moscow.

Russia largely has been bolstering defensive lines in southern Ukraine and in the eastern Donbas region, where it recently made advances in a months-long bloody slog to capture the city of Bakhmut.

Ukraine needs “the ability to push back hard in the east and in the south,” Cleverly said.

Inside an Italian mob boss’s ‘regular life.’ What authorities discovered after arrest

“The best thing” that Putin “can do to preserve the lives of his own troops is to recognize that we’re gonna stick with Ukrainians until they are victorious, and bring this war to a conclusion and get around the negotiating table in good faith,” he said.

The British foreign ministry said Cleverly would also raise the topic of Iran with his U.S. and Canadian counterparts after Britain temporarily recalled its ambassador following the execution of British-Iranian national Alireza Akbari on Saturday.
— Reporting by Jonathan Landay and Arshad Mohammad in Washington and Alistair Smout in London; Editing by Matthew Lewis and Jonathan Oatis

Nuclear submarine deal an exercise in futility and should be sunk

In post-Treaty Ireland, surge of violence in the North proved a sign of things to…