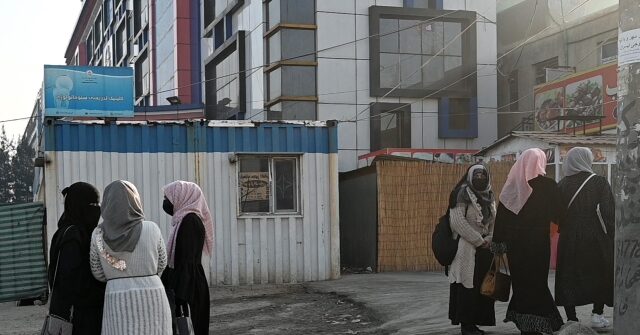 The United Nations announced on Wednesday that it has suspended certain “time-critical” activities in Afghanistan to protest the Taliban edict barring women from working for non-governmental organizations (NGOs.) Such organizations are heavily involved in delivering food and medicine to the large number of displaced, impoverished, and oppressed people in Afghanistan.

“Banning women from humanitarian work has immediate life-threatening consequences for all Afghans. Already, some time-critical programs have had to stop temporarily due to lack of female staff,” said a joint statement from several U.N. agencies and outside aid groups on Wednesday.

“They have access to populations that their male colleagues cannot reach and are critical to safeguarding the communities we serve. They save lives. Their professional expertise is indispensable. Their participation in aid delivery is not negotiable and must continue,” the statement asserted.

“We will endeavor to continue lifesaving, time-critical activities unless impeded while we better assess the scope, parameters and consequences of this directive for the people we serve. But we foresee that many activities will need to be paused as we cannot deliver principled humanitarian assistance without female aid workers,” the U.N. and affiliated agencies said.

U.N. agencies signing the statement included UNICEF, the World Food Program, and the World Health Organization (W.H.O.), along with the U.N. High Commissioners for Refugees and Human Rights. Other signatories included Save the Children, Mercy Corps, and CARE International.

Save the Children was one of five humanitarian agencies that announced it would suspend operations in Afghanistan on Sunday because they could not operate without female staff.

On Thursday, the foreign ministries of a dozen countries joined the U.S. State Department and the European Union in a joint statement demanding the Taliban reverse its “reckless and dangerous order barring female employees of national and international non-governmental organizations.”

As with the U.N. joint statement, the united foreign ministers declared that women are “absolutely central to humanitarian and basic needs operations.”

“NGOs will be unable to reach the country’s most vulnerable people to provide food, medicine, winterization, and other materials and services they need to live,” the statement warned.

“The Taliban continue to demonstrate their contempt for the rights, freedoms, and welfare of the Afghan people, particularly women and girls, and their disinterest in normal relations with the international community,” the statement declared.

The signatories to Thursday’s statement, including the foreign ministers of Australia, Canada, Denmark, France, Germany, Italy, Japan, Norway, Switzerland, the Netherlands, and the United Kingdom, said the were in “close contact” with the United Nations and “international donors.”

The Taliban is obviously banking on winning this global standoff because for all of their demanding rhetoric, the U.N. and Western nations will not cut off humanitarian aid to the suffering Afghan people – especially during Afghanistan’s notoriously harsh winter season, which the U.N. joint statement made a point of mentioning.

The U.N. is playing some very long odds by gambling that the Taliban will back down because it feels some vestigial sense of human compassion for the Afghan people. It seems far more likely that the U.N. will back down and find a way to keep aid operations running without female employees, or perhaps offer the Taliban some incentives to back away from its misogynist policies.

The Taliban left itself a way out by claiming it only banned women from first amusement parks, then universities, and now NGO employment because they were flaunting strict Islamic dress codes and disobeying Taliban orders not to fraternize with men. The bans on women were vaguely described by Taliban officials as temporary pending improvement, so the junta can lift the bans at any time without embarrassment by claiming they were effective, and women have learned their place.

The Associated Press (AP) on Thursday spoke with Afghan women who insisted they meticulously obeyed the Taliban’s clothing and behavior rules — even when they returned home from school or work — because they knew Taliban thugs were following them to monitor compliance.

These women therefore accused the Taliban of lying about female misbehavior to justify its bans and suspected the prohibitions could be lifted early in the New Year, once the extremist rulers of Afghanistan get whatever payoff they are seeking.

Several of the AP’s correspondents seemed convinced the woman bans were theatrical, staged mostly in big cities for the benefit of foreign observers while women were actually still permitted to work in rural areas.

“They have been targeting women from the beginning. Why are they making enemies of women? Don’t they have wives, sisters and mothers?” one banned female NGO worker complained.

“The women we help don’t have computers, they don’t have Zoom. It’s hard to do this job without being face-to-face. But I am hopeful we can start our work again in the coming weeks,” she said.

Some women told the AP they would continue attempting to provide humanitarian assistance even though they could no longer officially work for NGOs. They worried about international donations drying up as the civilized world recoils from Taliban brutality.

The UK Guardian on Thursday pointed to the faintest of cracks appearing in the Taliban hierarchy, as at least two prominent members of the extremist organization have publicly expressed tepid opposition to banning women from school and work.

“The Taliban know that their government is not recognised by the world. By restricting women, they want to demonstrate false strength and attract the attention of the world. Unfortunately, the main victims of this policy are women,” Kabul-based women’s rights activist Palwasha Hamdard told the Guardian.

Nasa building US facility that could house alien life…