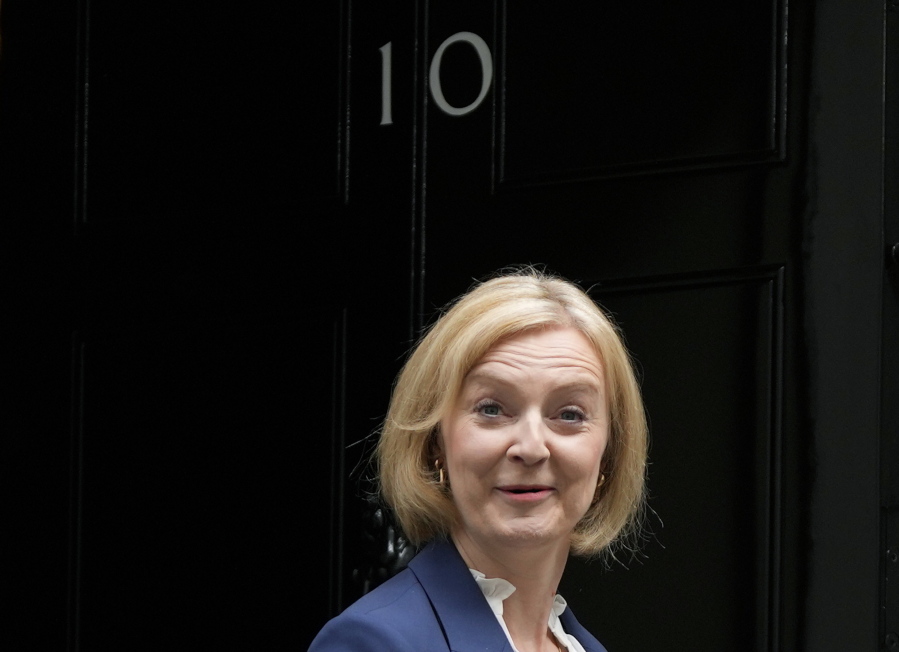 LONDON (AP) — Newly installed U.K. Prime Minister Liz Truss told Parliament on Wednesday that she would tackle Britain’s “very serious” energy crisis while still slashing taxes, ruling out imposing a windfall levy on oil companies to pay for her plans to offset the soaring cost of heating and electricity.

Truss rebuffed opposition calls for a new windfall tax, even as she refrained from explaining how she would fund a plan meant to help the public pay energy bills skyrocketing because of Russia’s invasion of Ukraine and the economic aftershocks of COVID-19 and Brexit.

She said during her first session of prime minister’s questions that she would set out a plan on Thursday to help with the immediate prices crisis so that people “are able to get through this winter,” as well as measures to bolster Britain’s long-term energy security.

But she added: “I am against a windfall tax. I believe it is the wrong thing to be putting companies off investing in the United Kingdom just when we need to be growing the economy.

“This country will not be able to tax its way to growth,” she said, to thunderous cheers from Conservative lawmakers in a packed House of Commons.

Truss’s spokesman said she wouldn’t cancel a windfall tax imposed in May by former Treasury chief Rishi Sunak, her defeated Conservative leadership rival, but wouldn’t bring in a new one. She is also scrapping a previously announced increase in corporation tax from 19% to 25%.

Opposition Labour Party leader Keir Starmer said that amounted to handing billions to energy firms that have pocketed hefty profits because of high energy prices. Instead, the cost of price relief will have to be paid by British taxpayers, he said, branding Truss’s economic plans a “Tory fantasy.”

British news media have reported that Truss plans to cap energy bills. The cost to taxpayers of that step could reach 100 billion pounds ($116 billion).

“The prime minister knows she has now choice but to back an energy price freeze, but it won’t be cheap and the real choice, the political choice is who is going to pay,” Starmer said. “Is she really telling us that she is going to leave (energy companies’) vast excess profits on the table and make working people foot the bill for decades to come?”

In her energy plan Truss also is likely to greenlight more oil and gas exploration in the North Sea and could lift a ban on fracking — both ideas that have been condemned by environmentalists.

Earlier Wednesday, Truss led the first meeting for her new Cabinet — a government diverse in race and gender and united in its support for the new leader’s staunchly free-market views.

Truss, 47, was appointed prime minister by Queen Elizabeth II on Tuesday after winning an internal Conservative Party election to lead the Tories. The former foreign secretary is Britain’s third female prime minister after Margaret Thatcher and Theresa May. All three have been Conservatives.

She immediately put her stamp on the government, clearing out many ministers from the administration of former Prime Minister Boris Johnson — notably those who had backed Sunak in the Conservative leadership contest.

She made Kwasi Kwarteng her Treasury chief, a key role for a Cabinet whose inbox is dominated by the energy crisis triggered by Russia’s invasion of Ukraine, which threatens to push energy bills to unaffordable levels, shuttering businesses and leaving the nation’s poorest people shivering at home this winter. Kwarteng is the first Black holder of the job whose formal title is Chancellor of the Exchequer.

In her first speech as prime minister on Tuesday, Truss said she would cut taxes to spur economic growth, bolster the NHS and “deal hands on” with the energy crisis.

“We shouldn’t be daunted by the challenges we face,” Truss said in her speech. “As strong as the storm may be, I know the British people are stronger.’’

I have limited time for the Kardashians, but who begrudges a…