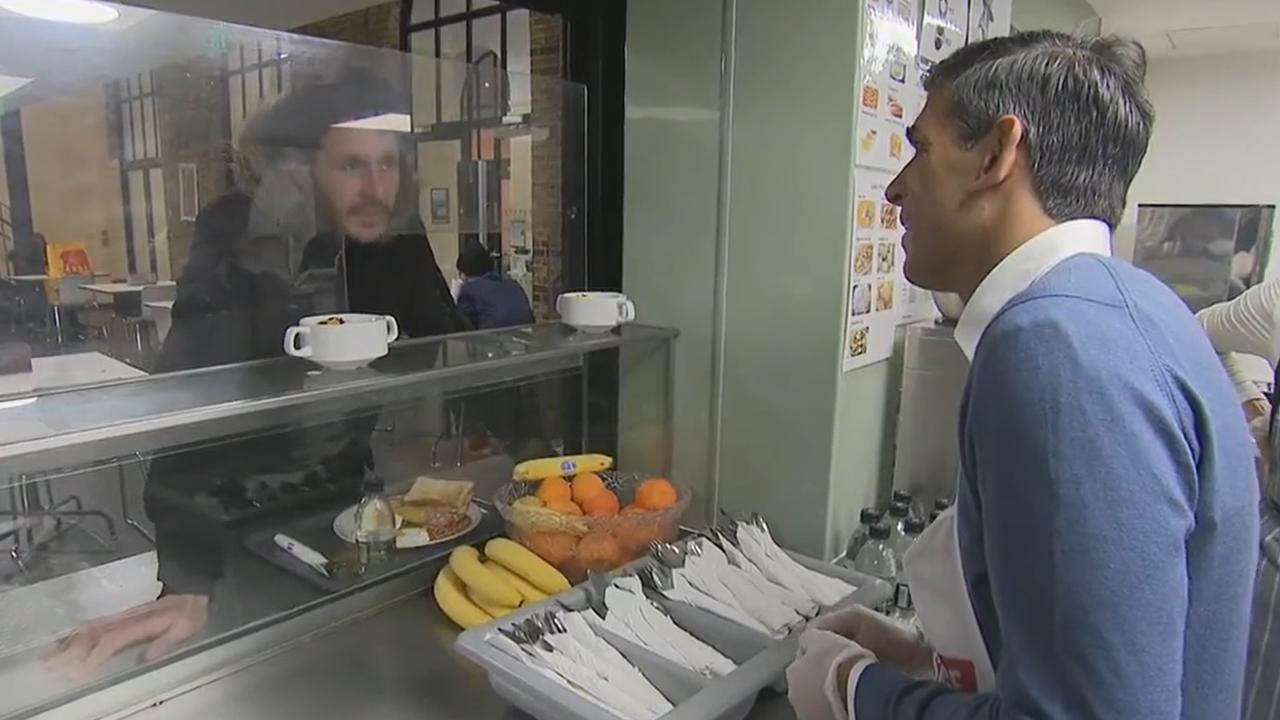 The UK Prime Minister has gone viral for a brutally awkward conversation with a homeless man, asking whether he works “in business”.

Rishi Sunak was serving breakfast during a visit to The Passage homeless shelter in London on Friday when the exchange occurred, with critics dubbing it “excruciating”.

The man, who introduced himself as Dean, asked the PM: “Are you sorting the economy out?”

“That is exactly what I’m trying to do,” Mr Sunak responded. “Do you have a … do you work in a business?”

“No, I’m homeless,” Dean replied. “I am actually a homeless person. But I am interested in business.”

“Yeah, what kind of business?” the PM asked.

Dean said he was interested in finance because “when finance and stuff’s doing well, we do well in London”.

Mr Sunak, a former investment banker, enthusiastically explained that he used to work in finance.

“Is that something you’d like to get into?” he asked.

The PM asked: “Yeah … what’s the plan? What are you doing this weekend?”

Dean said he was hoping to “get into some temporary accommodation so I’m not on the street”.

A clip of the exchange posted on Twitter by ITV News has been viewed more than 11.3 million times.

“Sunak asks a homeless man in a homeless shelter whether he ‘works in business’, then proceeds to talk about the financial services industry. Utterly bizarre,” wrote Adam Bienkob from Byline Times.

“There’s out of touch and then there’s a millionaire asking a homeless man in a homeless shelter if he’s in financial services,” author James Felton wrote.

“When you’ve never met real people and understood their lives then you’re the kind of person that asks a homeless person if he ‘works in business’,” solicitor Nazir Afzal said.

“Rishi Sunak to a homeless person: ‘What’s your plan? What are you doing this weekend?’ Taking in a show, maybe?” actor Reece Dinsdale said.

“One of the richest men in Britain serves a fried breakfast to a homeless man for the cameras. He appears to ask him if he aspires to work in finance. I mean, in the same time he could have offered to change his life around,” BBC presenter Adil Ray said.

The PM said his government has pledged £2 billion ($A3.6 billion) to tackle homelessness and rough sleeping over three years.

During the same visit, Mr Sunak blasted strikers threatening Christmas holidays for millions, saying he was “sad and disappointed” at the chaos.

The PM again held firm against giving out bumper pay rises to millions of workers, saying it would be the right decision in the long term to help inflation go down.

A barrage of industrial action has been taking place across Britain as people grapple with the worst economic situation in decades.

On Friday, Border Force staff walked out, threatening people trying to get back to the UK in time for Christmas.

And following action by the NHS, nurses announced plans for another two days of strikes in January as talks remain deadlocked.

But Mr Sunak insisted the government had acted “fairly and reasonably” on public sector pay.

“I am really sad and I am disappointed about the disruption that is being caused to so many people’s lives, particularly at Christmas time,” the PM said during the visit.

“When it comes to the difficult question of setting public pay, the government has acted fairly and reasonably in accepting all the recommendations of the public sector pay review bodies. I would urge everybody who is travelling at the moment to just please check before you make your journey so you know what it happening.”

But he refused to rule out giving NHS staff a one-off payment as a sweetener for them to call off more disruptive action.

“Our door is always open … there are lots of things people have raised as things that might make a difference, we’d be happy to talk about all those things,” he said.

Mr Sunak said not having huge pay rises was the right thing to do “in the long term” is the ”right thing for the whole country”.