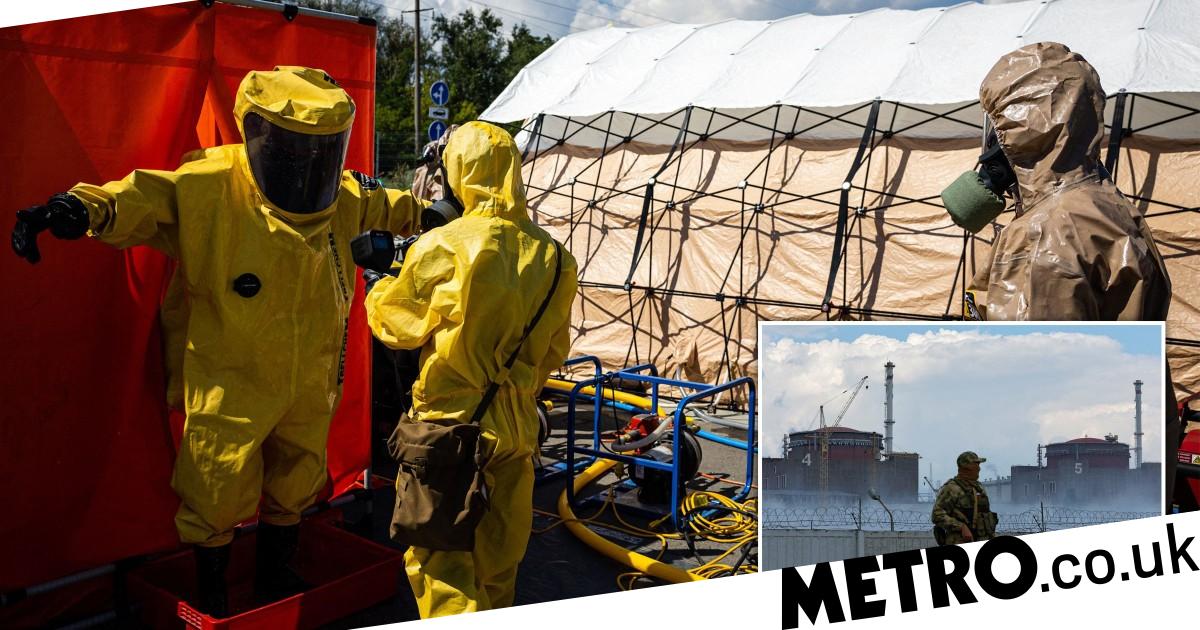 The country’s military intelligence reportedly suggests Russian forces may be preparing to stage a ‘provocation’ at Zaporizhzhia.

The Kremlin is said to have told workers to not report for duty today after seizing the site back in March.

Moscow has been accused of utilising it as a base to target nearby towns, with fears of nuclear disaster stopping Ukraine from direct retaliation.

But Russian officials insist Ukrainian forces are recklessly firing at the plant.

Dramatic pictures showed Ukrainian Emergency Ministry rescuers in hazmat suits and gas masks this week as they conducted exercises to prepare in case of a nuclear incident.

They were seen practicing evacuating an ‘injured man’, checking him for radiation before washing ‘contaminated’ vehicles.

It comes after the UN’s nuclear chief warned Zaporizhzhia ‘is completely out of control’ and must be stabilised to avoid a disaster.

Although the plant is controlled by Russia, Ukrainian staff continue to run it, leading to friction and alleged violence, Rafael Grossi said.

‘This deliberate terror on the part of the aggressor can have global catastrophic consequences’, he said.

‘The UN must ensure the security of this strategic object, its demilitarisation and complete liberation from Russian troops.’

The United Nations and the presidents of Turkey and Ukraine discussed ways to end the war and secure Zaporizhzhia this week.

Meanwhile, UN Secretary-General Antonio Guterres: ‘Agreement is urgently needed to re-establish Zaporizhzhia’s purely civilian infrastructure and to ensure the safety of the area.’

Russia’s foreign ministry has insisted a proposal from Mr Guterres to demilitarise the area around the plant is ‘unacceptable’.

Safety precautions are being taken and there are no heavy weapons in and around the plant, they said.

However, the ministry said a shutdown of the plant may be attempted if shelling continues.