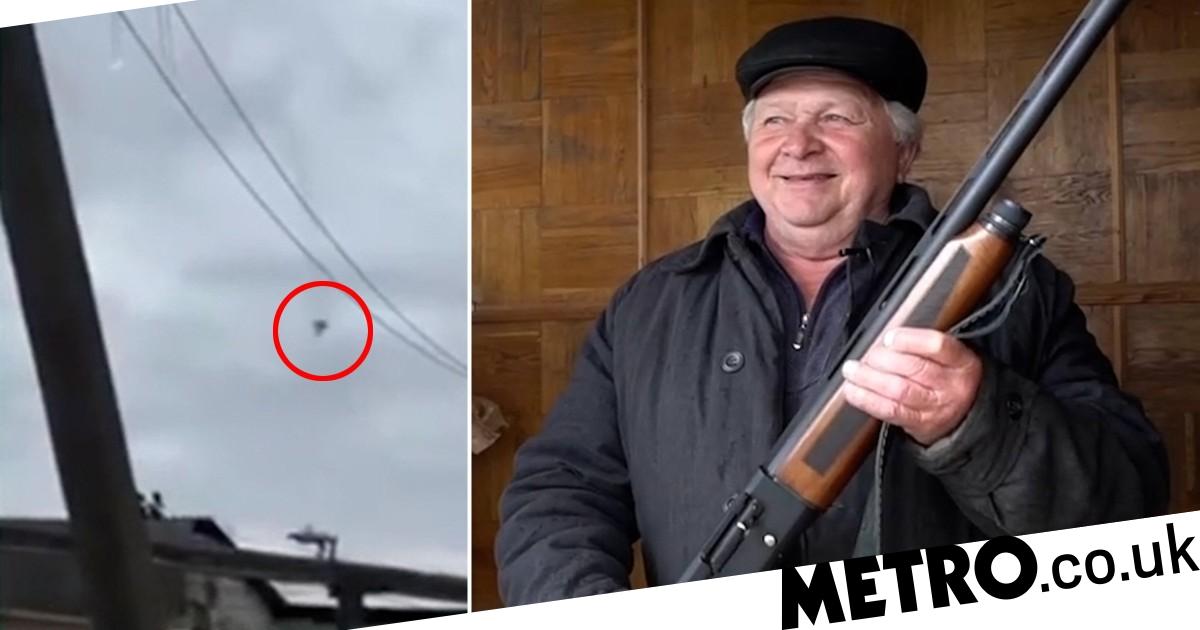 A Ukrainian pensioner who claims to have brought down a £74 million Russian fighter jet with nothing but an antique rifle has been awarded a medal for heroism.

According to a government agency, Valeriy Fedorovych allegedly took out a Russian Su-34 warplane as it flew over his home – and sent it spiralling towards the ground after scoring a million-to-one hit with his rifle.

Now Ukraine’s State Border Service has praised the pensioner for his ‘heroism’ and ‘assistance in the protection of the state border’.

The incident is said to have taken place in March, when Vladimir Putin’s troops were engaged in a bombing campaign in Chernihiv, a hard-hit city in northern Ukraine.

When he saw the aircraft flying overhead, Mr Fedorovych said he ‘took his rifle and opened fire’, and watched in amazement as the plane plummeted to the ground moments later.

‘Heroes among us,’ Ukrainian officials said, ‘The enemy fighter Su-34 was targeted and destroyed.’

The authorities released a short clip featuring the pensioner walking through destroyed buildings in Chernihiv with a rifle over his shoulder as he discussed the toll the war has taken on his hometown.

‘On the second lap, how did it go? I went “bang” with my stick [rifle]. And it was like “bang.” And it [the Russian jet] fell,’ Mr Fedorovych said in the video.

An clip appears to show the moment the Russian plane was hit accompanied by cheering and clapping in the background, although Mr Fedorovych does not personally appear in the footage.

A later segment shows the Ukrainian pensioner in his garage along with some debris from the downed aircraft, which he recovered from the crash site and now keeps as a memento.

Russia’s invasion of Ukraine has taken a heavy toll on the city of Chernihiv, which is located around 88 miles north of Kyiv.

The Russian military began attacking the city on February 24, the first day of Russia’s full-scale invasion of Ukraine. A report from Human Right Watch claimed Putin’s forces has killed ‘scores’ of civilians in the area.

‘The failure of Ukrainian forces in some areas to remove civilians added to the casualties, but the attacker must still distinguish between civilians and combatants.’

Although Russian forces never succeeded in capturing Chernihiv, they had effectively surrounded the city by late March, trapping civilians and subjecting them to further bombardment before being driven out by Ukrainian forces following their defeat at the Battle for Kyiv.