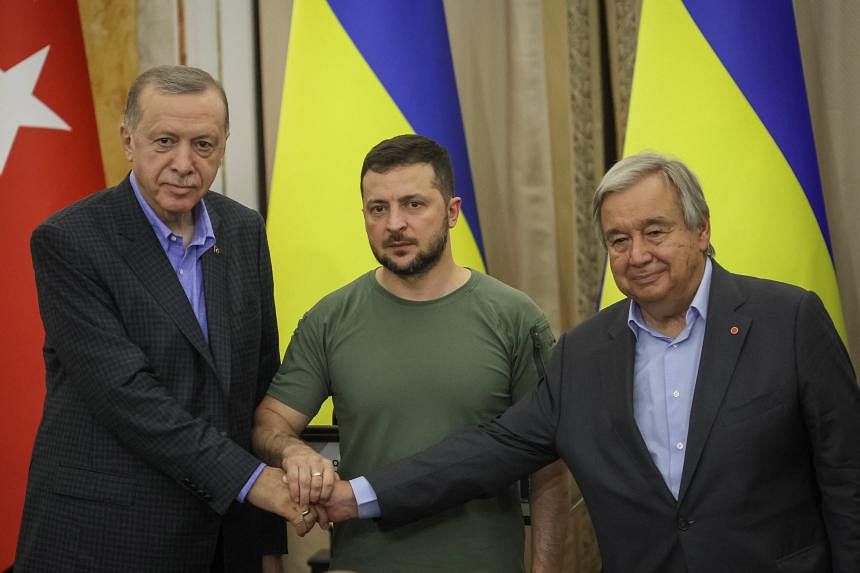 The sides also discussed situation at Zaporizhzhia nuclear power plant, the largest in Europe and seized by Russia in early March.

Guterres reiterated calls for demilitarisation around the nuclear plant.

“The facility must not be used as part of any military operation. Instead, agreement is urgently needed to re-establish Zaporizhzhia’s purely civilian infrastructure and to ensure the safety of the area,” Guterres said.

Russia, which captured Zaporizhzhia soon after its Feb 24 invasion of Ukraine, said it could shut down the facility – a move Kyiv said would increase the risk of a nuclear catastrophe.

Moscow had earlier rejected as “unacceptable” international calls for a demilitarised zone around the nuclear plant, which is still operated by Ukrainian engineers under Russian occupation.

The power station sits on the Russian-controlled south bank of a huge reservoir; Ukrainian forces hold the north bank.

Recent days have seen several incidents of shelling at the plant, which both sides blame on each other.

Ukraine also accuses Russia of using the plant as a shield for its forces to launch strikes across the reservoir on Ukrainian-held cities, which Moscow denies.

Reuters cannot independently confirm the military situation in the area or responsibility for shelling.

Zelensky said after meeting Guterres on Thursday that they had agreed parameters of a possible mission of the International Atomic Energy Agency to the plant.

“Russia should immediately and unconditionally withdraw its forces from the territory of Zaporizhzhia nuclear power plant, as well as stopping any provocations and shelling,” he said.

Meanwhile, 17 people were killed and 42 injured in two separate Russian attacks on the major north-eastern Ukrainian city of Kharkiv, the regional governor said on Thursday.

Three civilians were killed and 17 wounded in a pre-dawn rocket strike on Thursday, the local emergency service said.

That followed a Russian attack on Kharkiv on Wednesday, in which the emergency service initially said 12 people were killed.

Ukraine has hinted it orchestrated other blasts over the last 10 days at other Russian installations in Crimea.

The sources said Thursday’s explosions were near Russia’s Belbek military airport, north of the Black Sea fleet’s headquarters in Sevastopol.

The skeletons at the bottom of Devils Hole

Ukrainians forced to vote at gunpoint in Putin’s ‘sham’ referendum

What are the FIFA 23 Division Rivals Rewards each week and…

Cheapest staycations during the October half-term &…

Ukrainians forced to vote at gunpoint in Putin’s…