‘Under the Same Laws as Everyone Else’ 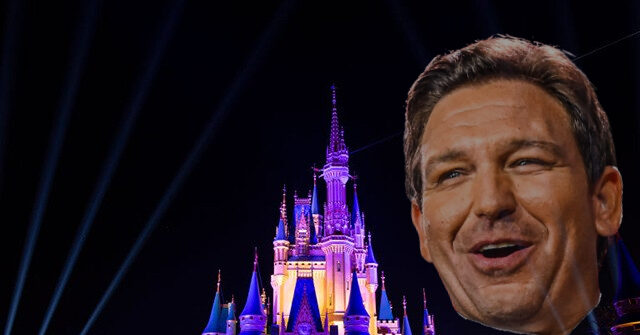 Florida isn’t backing down from its intention to strip Walt Disney World of its self-governing status following Disney’s decision to pick a political fight with Gov. Ron DeSantis (R) last year over the state’s anti-grooming Parental Rights in Education law.

A new plan introduced by the state legislature Friday — with the backing of the governor — proposes a special law that would put in place state oversight over Disney’s Reedy Creek Improvement District, effectively ending Disney’s self-rule over its Orlando fiefdom where it has enjoyed numerous special privileges, including tax breaks, for five decades.

The measure would also prevent Disney from using taxpayer dollars to pay off the district’s outstanding debts and bond obligations.

The notice for the plan was posted on Osceola County’s official site, but the legislation would also impact Orange County since Disney operates in both counties.

“The corporate kingdom has come to an end,” DeSantis’ communications director, Taryn Fenske, said in a statement to Breitbart News. “Under the proposed legislation, Disney will no longer control its own government, will live under the same laws as everyone else, will be responsible for their outstanding debts, and will pay their fair share of taxes.”

She added: “Imposing a state-controlled board will also ensure that Orange County cannot use this issue as a pretext to raise taxes on Orange County residents.”

Gov. DeSantis will have the power to appoint members to Reedy Creek’s oversight board if the bill passes, sources told Fox News.

The Walt Disney Co. waged an unsuccessful political war against DeSantis last year over the state’s Parental Rights in Eduction law — which the left and the mainstream media dubbed “Don’t Say Gay.” The law prohibits the teaching of sexuality and gender ideology, including transgenderism, to children in kindergarten through third grade.

Under then-CEO Bob Chapek, Disney caved to a small group of activist employees and pledged to fight the legislation and get it repealed. In response, Gov. DeSantis proposed terminating the Reedy Creek Improvement District. In April, the state legislature voted to end Disney’s special status.

Old-now-new Disney CEO Bob Iger recently expressed regret the company got into a fight with Florida, telling an employee townhall meeting he was “sorry to see us dragged into that battle.” But just last year, before returning to Disney, Iger publicly denounced Florida’s law and even chided corporate CEOs for not getting more involved in politics, saying activism is important “even if voicing an opinion on those issues potentially puts some of your business in danger.”

A new wheelchair from the inventor of the Steadicam