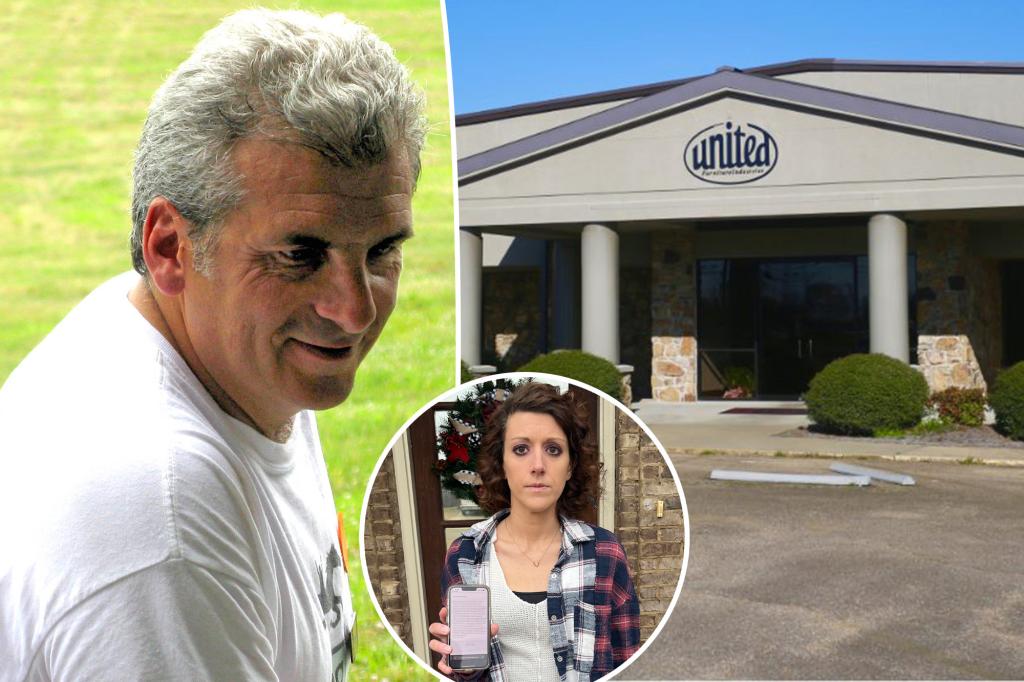 The owner of United Furniture Industries — which last week fired 2,700 workers through texts and emails while they slept — has disappeared after squabbling with the company’s board and bankers over whether to file for bankruptcy, The Post has learned.

David Belford, a wealthy Ohio businessman, has kept mum since the layoffs of his entire workforce in Mississippi, North Carolina and California in the days before Thanksgiving — despite efforts by lenders and lawyers representing axed workers to reach UFI, according to multiple sources.

“No one has heard from the owner. He’s not returning anyone’s phone calls. It’s such a horrible situation,” one source with knowledge of the situation told The Post.

The Post has made several attempts to contact Belford. One attorney representing hundreds of laid off employees in Mississippi, Philip Hearn, said rumors are swirling among former employees that Belford had jetted off to Paris after the firings.

The board of the Tupelo, Miss.-based company held an emergency meeting on Nov. 20 and made a decision to file for Chapter 11 bankruptcy protection. But the next day, Belford nixed the plan, according to Hearn, who is representing more than 600 UFI employees in Mississippi, including many senior-level workers.

“Belford said ‘We are not going forward with a Chapter 11,’” according to Hearn. “It sounds like the management team came up with a plan to save the company and Belford said, ‘That’s a wrap — not doing it.’”

UFI’s workers received frantic emails and texts while they slept on Nov. 21 telling them not to come to work the next day because their jobs had been eliminated effective immediately along with their health care benefits.

Belford’s silence has left UFI’s lenders and a handful of people close to the company scrambling to figure out what to do with its assets, leases and jilted employees, sources told The Post.

Despite the company’s dire situation, it has not filed for bankruptcy protection or liquidation. Belford is the only person with the authority to make legal decisions, a source with knowledge of the situation told The Post.

“He irresponsibly shut down his company without advance notice to anyone,” the source said. “And he has the means to do this the right way.”

Officially, UFI blamed “unforeseen business circumstances” for the layoffs, but privately Belford is pointing a finger at the company’s lenders, which include Wells Fargo, Hearn alleged.

Wells Fargo told The Post it had no inkling of Belford’s decision.

“Wells Fargo was saddened to learn of the abrupt shutdown of United Furniture Industries, Inc. and its affiliated companies (“UFI”),” the bank said in a statement to The Post. “Once notified of the company owner’s decision, we immediately reached out to UFI’s senior leadership to address the consequences of the actions taken by the company’s owner and support its employees.”

Belford, who lives in the affluent Columbus suburb of Gahanna, owns several other companies including Solstice Sleep Products and an investment firm called Stage Capital.

He has donated millions to charities and non-profits largely via the Belford Family Charitable Fund. Among his largesse was a $10 million gift to establish a spinal cord injury research center at Ohio State University’s Wexner Medical Center.

Former employees maintain that there was no hint of the UFI’s financial struggles despite a management shake-up over the summer in which UFI’s CEO, chief financial officer and executive vice president of sales were axed and some 500 employees were laid off.

But UFI continued to add new employees to its ranks, including some whose first and last day was Nov. 21, according to employment attorney Jack Raisner, who is representing former California employees in a proposed class-action complaint alleging that UFI violated federal law by failing to give workers 60 days notice by issuing so-called WARN notices.

Belford was personally responsible for firing “UFI’s long-standing CEO and CFO in 2022 [replacing them] with individuals who had previously held low-level managerial positions,” according to the California complaint.

“A lot of people have genuine concerns because of their lack of medical coverage and some had scheduled procedures” that they can’t afford now, said William “Jack” Simpson, a Mississippi attorney who filed a proposed class-action lawsuit – one of at least four such complaints – on behalf of laid-off employees.

One fired human resource worker, Bill Burke — who was hired three weeks before the mass layoffs — continues to field questions from frantic workers about how to get new health care insurance. UFI had given him a company cell phone that hasn’t been disconnected.

“I’m answering it from my home,” Burke told The Post. “My future is just as uncertain as everyone else’s.”

How to eat healthy amid rising food costs? Expert says plant-based ‘all the way’ – National