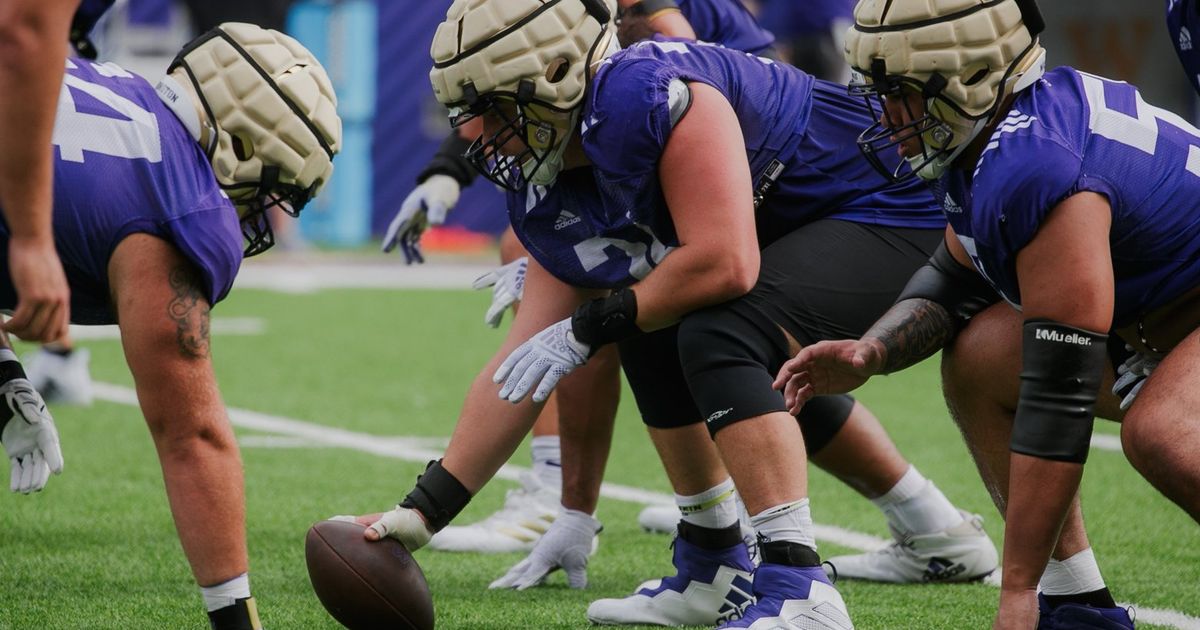 Rome Odunze had a day.

In UW’s fifth practice of preseason camp, the 6-foot-3, 201-pound wide receiver was unsurprisingly active — piling up chunk plays on passes from multiple quarterbacks. The highlight was a 27-yard touchdown that capped a 58-yard drive in a two-minute drill, in which junior quarterback Michael Penix Jr. dropped a floating deep ball to Odunze — who had slipped past redshirt freshman cornerback Davon Banks.

The sophomore wide receiver from Las Vegas also contorted along the left sideline to haul in a pass from quarterback Sam Huard for a 30-yard gain, despite the tight coverage of corner Mishael Powell.

Though UW’s three-pronged quarterback competition unsurprisingly steals the spotlight, the Huskies remain quietly confident in their wide receiver corps — with Odunze, sophomore Jalen McMillan and redshirt freshman Ja’Lynn Polk the established starters. McMillan found a hole in the Husky secondary during a scrimmage drill Tuesday, and Penix eluded pressure to find the sophomore receiver for a catch-and-run 44-yard gain. Nebraska running back transfer Will Nixon then ended the drive with a four-yard touchdown plunge.

And considering Odunze, McMillan and Polk’s starting statuses, it’ll be interesting to see how junior Giles Jackson factors into the rotation this fall. The 5-9, 185-pound receiver and former Michigan Wolverine has made consistent plays in camp and did so again Tuesday, pushing for more than a special teams return role.

As for the aforementioned quarterbacks, Penix was the primary starter Tuesday — though he, Huard and Dylan Morris continue to rotate from practice to practice. Penix’s 27-yard strike to Odunze was the lone touchdown strike of Tuesday’s practice, and the quarterback trio failed to surrender an interception. The three scholarship signal callers should receive equal reps at least through the team’s first fall scrimmage on Saturday.

Here are some other observations from UW’s fifth practice of preseason camp.

It appears Kirkland is still shaking off the offseason rust, as the 340-pound senior sustained a false start penalty on a third-and-10 play — then exited the lineup as punishment.

It’ll be interesting to see how the depth chart shakes out at the edge position — where Bralen Trice, Jeremiah Martin and Zion Tupuola-Fetui have established themselves (in some order) as key contributors and junior JUCO transfer Sekai Afoa-Asoau, sophomore Sav’ell Smalls and redshirt freshman Maurice Heims compete for rotational reps. Afoa-Asoau earned some second-team reps Tuesday, while Smalls had his best practice in recent memory — blowing past Buelow for a scrimmage sack and swallowing running back Sam Adams II for a tackle for loss.

Expect four edge players to earn significant minutes. But who will be the fourth?

Redshirt freshman Davon Banks — who leads the team with four interceptions in five practices — also earned a few starting cornerback reps opposite of Jordan Perryman (and in Powell’s place). Perryman and Powell remain the assumed starters, but it’ll be interesting to see if Banks or redshirt freshman Elijah Jackson (who leaped to break up a Morris pass intended for wide receiver Lonyatta Alexander Jr. along the sideline Tuesday) can gain more ground.

While running backs Wayne Taulapapa, Will Nixon, Cameron Davis and Sam Adams II continue to take the majority of scrimmage snaps, New Mexico transfer Aaron Dumas earned his first action (with the second team) Tuesday. The coaching staff has repeatedly emphasized that the goal is to get players who didn’t participate in the spring as many reps as possible early in camp … but it’s still hard to dismiss Taulapapa, Nixon and Davis’ extended roles.

Will Dumas or Richard Newton (who continues to be limited while working back from an ACL injury) become regular contributors? Time will tell.

Malcolm Gladwell’s attack on working from home is nonsense