UW football could be a juggernaut next season. But it’s time to celebrate a 2022 to remember. 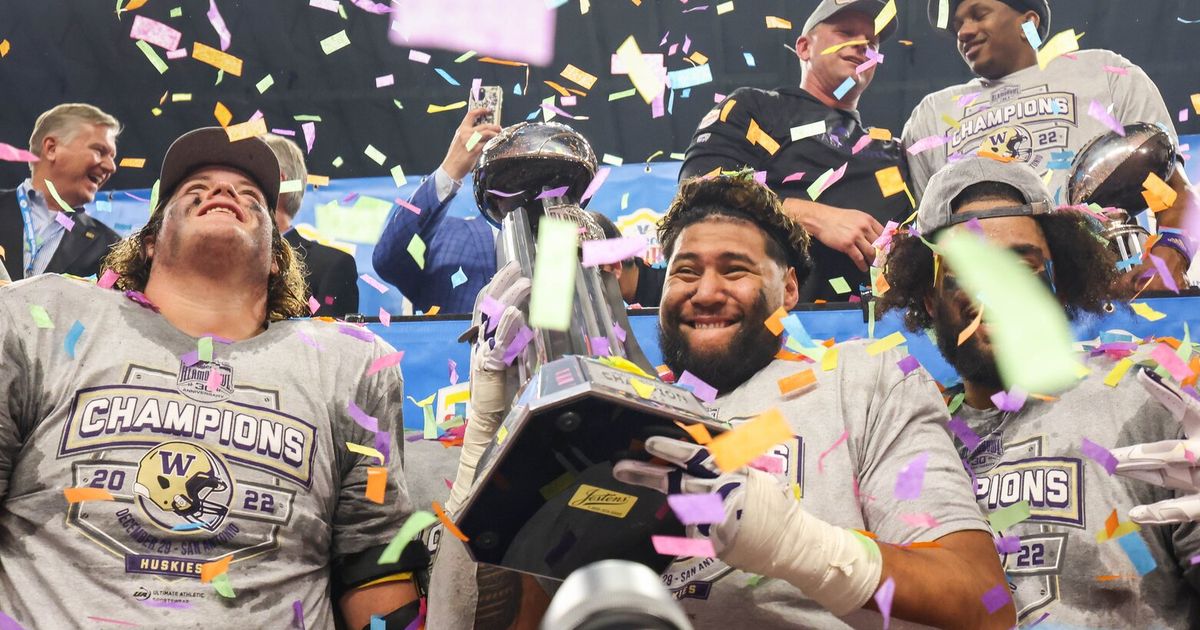 SAN ANTONIO — It would be easy for a Huskies fan to look ahead to next year and salivate.

But the move right now is to look back on this past one and celebrate.

A program-defining season for Washington might very well be imminent.

But compared to most seasons in program history, 2022 was eminent.

The UW football team (11-2) cemented one of the more dominant and unexpected runs in college football this year with a 27-20 win over Texas in Thursday night’s Alamo Bowl. An offense that hasn’t scored fewer than 24 points this season — and averaged 39.7 per game — lassoed the Longhorns and got help from a sometimes porous “D.” The victory is the seventh in a row for the 12th-ranked Dawgs, who tallied 11 dubs for just the second time in 22 years. And given how this was the Huskies’ most prestigious bowl win since beating Purdue in Pasadena on Jan. 1, 2001, it’s necessary to commemorate their achievements before gazing too far into the future.

“We’ve been through a lot of ups and downs and adversity the past few years, through COVID, through last year, going 4-8, new coaches — but we stayed down, kept our nose to the grindstone and we did it for each other,” said Washington tight end Devin Culp, who finished with four catches and 29 receiving yards Thursday. “I think every night that we come out here and we’re showcased on national television, you can see the connectedness and the love. It’s a different group.”

Washington’s previous season wasn’t the program’s worst since the turn of the century, but it’s on the podium. The 2021 squad went 4-8 as second-year coach Jimmy Lake (who was coaching his first full season) was fired with two games remaining on the schedule.

So in came Lake’s replacement, Kalen DeBoer, who was unproven in a Power Five conference. And with him came quarterback Michael Penix Jr., whose injury history overshadowed his accomplishments when healthy. And even though there were consistent defensive shortcomings and an inexplicable loss to Arizona State (which came a week after a more digestible loss against UCLA), Washington slowly re-established its reputation as a national power by stacking up wins — the most prominent being a 37-34 victory over then No. 6 Oregon in Eugene.

Kudos were appropriate regardless of Thursday night’s outcome at the Alamodome. But topping 20th-ranked Texas punctuated a one-year reconstruction that will almost surely vault UW into the AP Top 10.

Stellar as it is stunning.

Of course, the glee the Huskies faithful feel now is accentuated by the fact that so many of the team’s standouts are coming back next year. Penix, who led the country in passing this season, shocked the country by announcing his return earlier this month.

There is no telling whether this will lead to an improvement on UW’s 2022 campaign. Just because the stars are returning doesn’t mean the stars will align. But a conspicuous amount of talent will be packed into that UW locker room, and fans have every right to start dreaming big.

Still, when DeBoer was asked how he felt about next year after the game, he responded, “First we’re going to celebrate this one.”

It’s tough to evaluate the strength of various conferences based on how they perform during bowl season. Some teams are more motivated than others, and many lose a host of key players who want to preserve their health.

But Texas (8-5) — a Big 12 school headed toward the SEC — is one of the most iconic programs in the country. Beating the Longhorns — a three-point favorite heading into the game — was a big deal for both Washington and the Pac-12.

During the postgame celebration, McMillan talked about how the Huskies are constantly “silencing the critics.” He mentioned how a lot of folks out there have opinions about what the Dawgs are capable of, but that such opinions never lead them astray.

That said, he became most animated when asked about what they can do next season.

“I think we’re going to win a Natty,” McMillan said, referring to a national title.

Hey, that doesn’t mean Jalen isn’t celebrating the moment. He just thinks there are bigger celebrations to come.