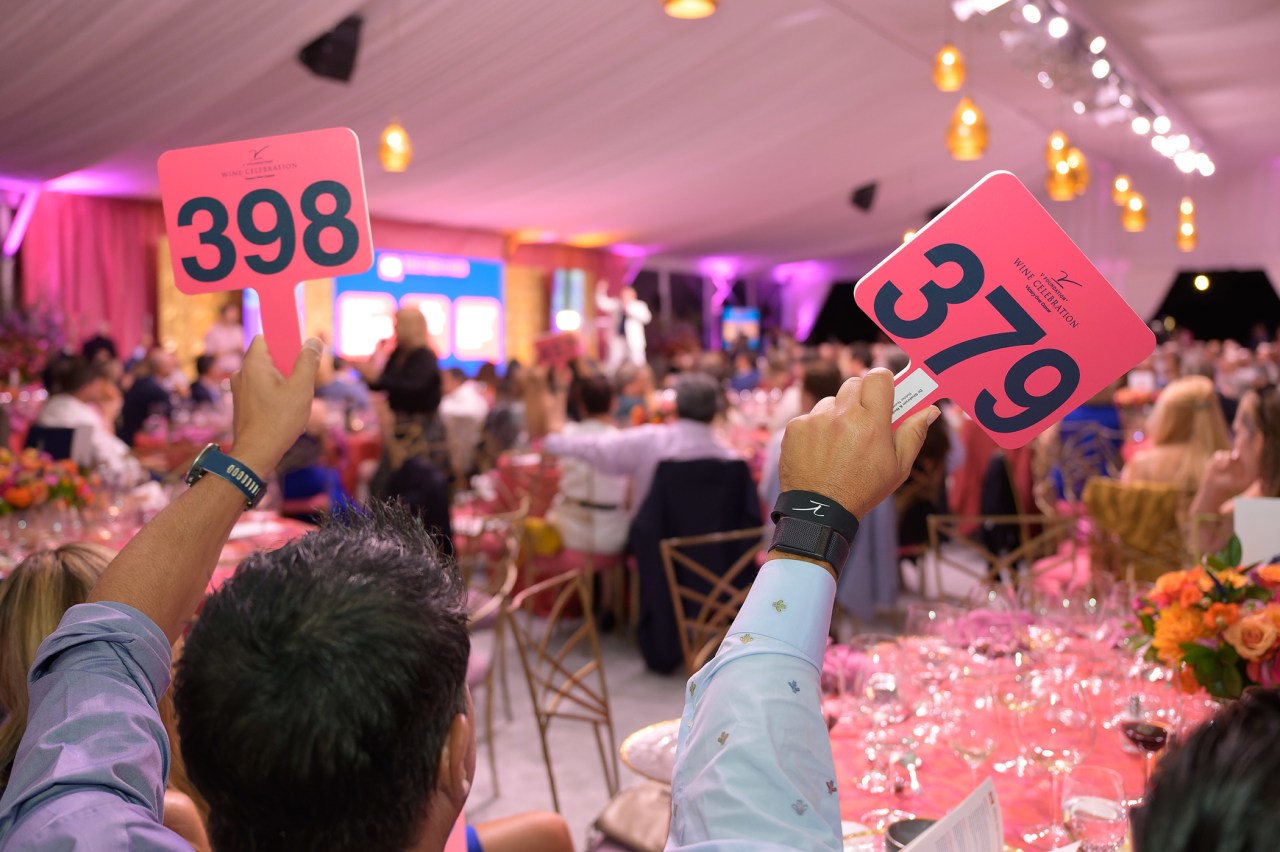 “The V Foundation continues to make a difference in the fight against cancer through the amazing support of our sponsors, donors and our generous bidders,” said Co-chairperson Amy Marks Dornbusch.

Founded in 1993 by North Carolina State University basketball coach Jim Valvano, the V Foundation for Cancer Research has funded groundbreaking cancer research with $290 million in grants. V Foundation-funded researchers are investigating a wide range cancer issues, including how melanoma metastasizes to the liver, combination therapies for non-Hodgkin lymphoma, and the molecular underpinnings for diffuse intrinsic pontine gliomas, a rare and deadly pediatric cancer.

Three-Day Signature Series of Events in the Stunning Napa Valley

On Thursday, August 4, the event kicked off with the Humanitarians & Founders luncheon, which was held at Vineyard 7 & 8 and featured food by Chef Andre Villahermosa and wines from legendary Napa winemaker, Martha McClellan.

The luncheon was followed by Dinner with the Docs surrounded by vineyards at Far Niente winery. Attendees mingled with clinicians and researchers on the V Foundation’s Scientific Advisory Committee, learning more about their important work.

The next day began with a luncheon at Press Restaurant for 2022 Vintner Grant Honoree, Samantha Rudd, featuring food from Chef Philip Tessier and wines from Rudd Estate. Friday evening was capped off with the entertaining Rock the V Party held at The Estate Yountville.

Saturday’s Answer for Cancer Research Symposium, gave leading physicians and scientists opportunities to talk about the current state of cancer research. Attendees learned about the various projects the V Foundation is funding and how early detection is one of the keys to curing cancer.

A weekend highlight was the Title IX Luncheon, celebrating the 50th anniversary of the passing of the landmark federal civil rights law that prohibits sex-based discrimination in any educational institution that receives federal funding.

The event peaked with the live auction, featuring dozens of incredible lots up for bid.

The evening’s top lot was 6 Liters of Screaming Eagle in Memory of Ron Kuhn, a V Foundation Wine Celebration and Napa Valley longtime friend, dedicated supporter, and philanthropist. The gavel came down at $270,000 for this very special lot featuring a 1992 6-Liter of Screaming Eagle, one of two ever produced by world renowned winemaker Jean Phillips, and one of the most prized possessions from her private cellar. The lot was purchased by Gary Jabara, new owner of the Estate Yountville, the Wine Celebration Weekend’s host headquarters.

An Exclusive Sanctuary & Solomon, featuring five nights at an Exclusive Resorts residence paired with a rare 18-Liter of 2008 Kathryn Hall Cabernet Sauvignon, one of the top wines in the world for that vintage

“The V Foundation Wine Celebration has once again raised essential funds to help us move toward Victory over Cancer®,” said Shane Jacobson, CEO of the V Foundation. “We couldn’t do it without the support of our amazing staff and volunteers, united with our generous supporters and Napa Valley’s world-class vintners and talented chefs…congratulations to all!”