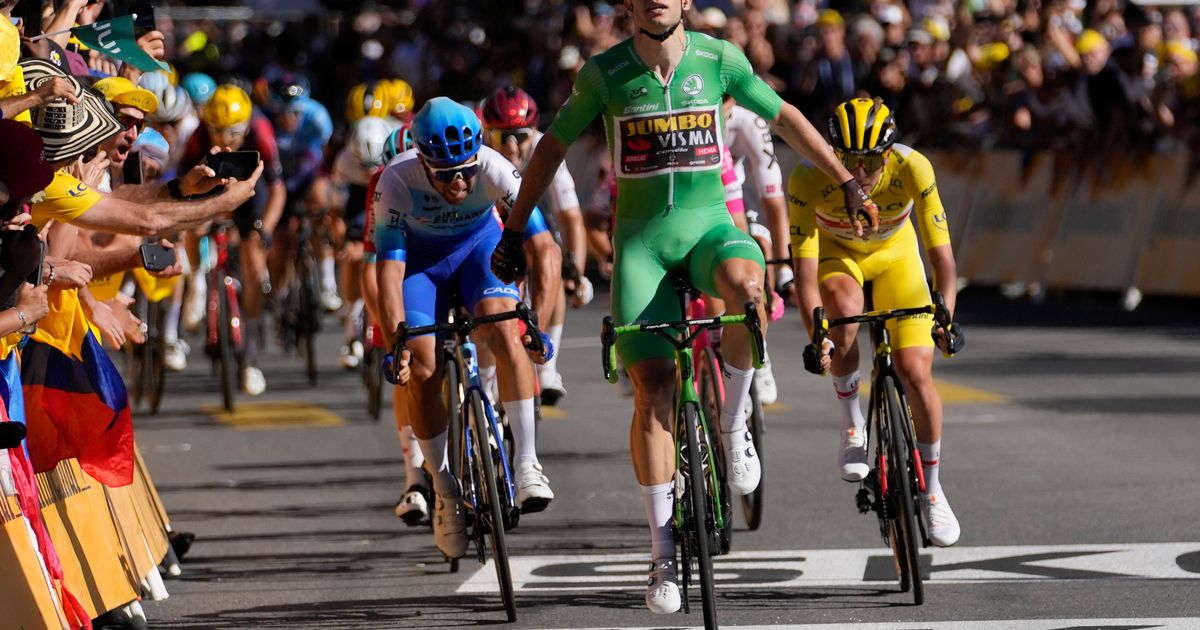 Van Aert, who won the fourth stage and wore the yellow jersey for three days, edged Michael Matthews in the sprint to the line on the summit finish.

Pogačar was third, with the Slovenian rider picking up more valuable bonus seconds, at the end of the hilly 186-kilometer (116-mile) route from Dole in eastern France to Lausanne.

“I’m super happy,” Van Aert said. “I’m really glad my team put just everything in to chase down the breakaway, and then you have to finish it off.

“It was a pretty tough (final) climb . . . really steep, so I had to fight to stay in the wheel of Pogačar and his teammates, but I knew if I could stay in the wheel the sprint was a little bit flatter so I was waiting for that moment.”

Pogačar, who won both previous stages, just missed out on a hat trick of victories but extended his advantage to 39 seconds over Jonas Vingegaard and 1:14 ahead of 2018 winner Geraint Thomas.

“It was not that far away but it was a fun game today. I maybe hesitated a bit and Van Aert passed me with super speed. For sure it’s a little bit disappointment but third place is still great,” said Pogačar, who rides for UAE Team Emirates.

“I always like sprinting, but when I was younger I was the smallest and almost always the last. So I’m really happy that now, at least when it’s going up, I can do a solid sprint in the end, but still not as close as Matthews and Van Aert.”

There was disconcerting news before the start of the day as Geoffrey Bouchard and Vegard Stake Laengen became the first riders to leave the race after testing positive for the coronavirus. Multiple support staff also tested positive.

American cyclist Kevin Vermaercke had to abandon early on in the stage after being caught in a crash at the back of the peloton, shortly after the start.

The peloton regrouped but the chaos gave the breakaway riders the opening they needed. Mattia Cattaneo, Fred Wright and Frederik Frison swiftly built a lead of around three minutes.

The trio led for most of the day. Frison was the first to be dropped, as they headed towards the penultimate of the three categorized climbs. It was then the turn of Cattaneo, and Wright was eventually caught on the final ascent, with 3.5 kilometers remaining.

Despite the steep gradients, the peloton sped towards the finish. Matthews launched his sprint with Pogačar in pursuit, but Van Aert came around both of them to cruise through for the win.

Sunday’s ninth stage has four classified climbs — including two top category ascents — on the 193-kilometer (120-mile) route from Aigle in Switzerland through the Alps to the ski resort of Châtel Les Portes du Soleil.