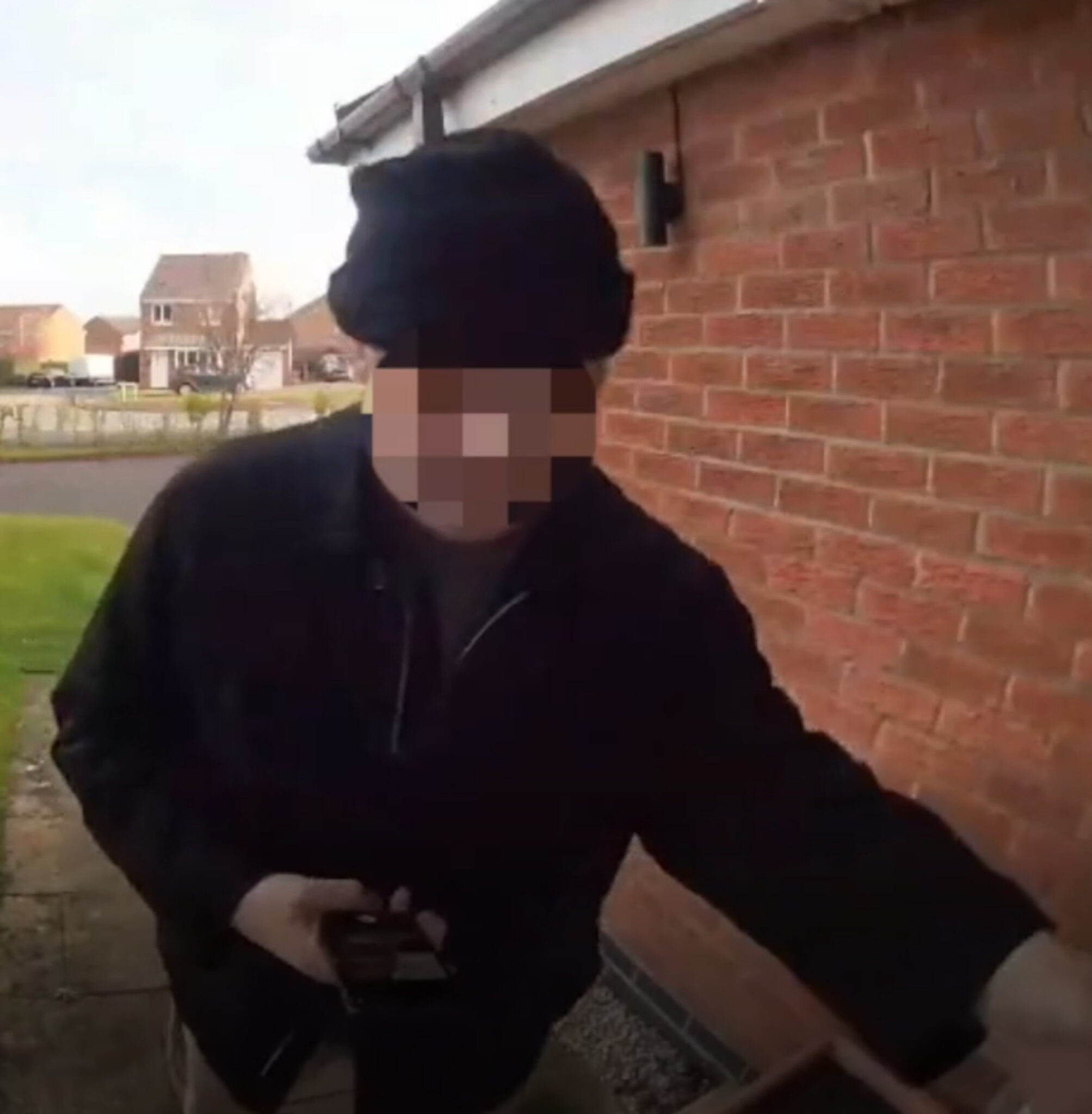 A HILARIOUS video has captured what must be Britain’s most laidback delivery driver – dropping a parcel off without stopping, before walking away scratching his backside.

Twitter user Cory captured the care-free courier on two occasions a fortnight ago via his Ring doorbell camera.

The man drops Cory’s parcel nonchalantly on his doorstep whilst simultaneously delivering a one-knuckle knock which is barely audible through the camera.

The mystery man barely breaks stride as he turns and walks away again, whilst pointing his phone behind him and seemingly capturing a photo for ‘confirmation of delivery’ before ambling away.

Hilariously, the camera appears to capture the driver absent-mindedly scratching his backside as he saunters back to his vehicle.

The courier then returns the following day in a different clip, but in almost the exact same circumstances.

He is dressed in the same black coat, black hat and beige trousers as the previous day, and approaches the house in an almost identical fashion.

He drops the parcel by Cory’s front door, raps on the door with a single knuckle and turns around to walk away again in one smooth movement.

Once again, the driver points his phone behind him without even looking, snapping a confirmation photo of the delivery and walking back to his vehicle.

Cory, 52, shared the footage to Twitter across two separate tweets two weeks ago writing: “Thanks Evri much appreciated.” and “He’s back! It’s the photo taking as [he’s] walking off. Going for the hat trick tomorrow.”

The tweets have attracted over 800 likes and more than 50 comments from amused Twitter users who were quick to comment on the driver’s hilariously casual attitude.

One user commented: “That was a very professional delivery by their standards.”

Another said: “Such a smooth delivery though. That’s class fair play to him got to earn his bacon ain’t he, and get them deliveries over the line.”

A third joked: “Can’t be Evri as it’s delivered.”

Another replied: “I can understand it to be fair, although annoying. But these deliverers are paid low and not appreciated and have to work long hours.

“Because of that, they’re deflated but need the money. He’s probably being monitored how quick his is.”

A fifth said: “The walking picture he takes does me in.”

Another user quipped: “Must have changed his underwear, no scratch and sniff this time.”

Speaking today Cory said: “I was at work and the doorbell notified me of the activation on the doorstep – when I saw the video it just made me laugh, I watched it over and over.

“I posted it on Facebook on the day which got a big reaction as well from friends, the second video was just as funny, one of those ‘can’t believe it’ moments I guess.

“Comments are always interesting on social media, take them or leave them really. I’m not one for taking social media seriously which is why I posted the videos, but I never thought it would be so liked.

“I guess it felt right as the BBC were reporting about Evri a day or so after my post, naturally people take to Twitter and put a search in and my posts were delivered on their timeline.”