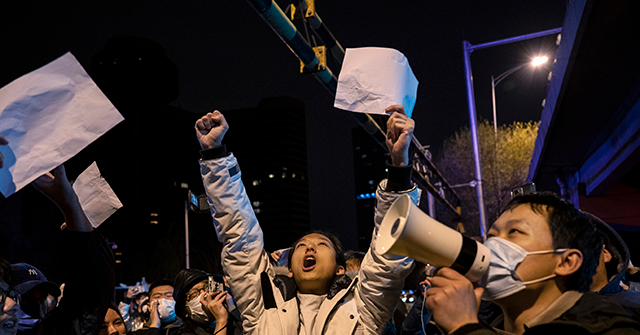 The massive anti-lockdown protests sprawling across China are making the Communist regime next door in Vietnam nervous, as news from China is spreading like wildfire across Vietnamese social media.

Radio Free Asia (RFA) on Wednesday found Vietnamese consumers devouring content about the Chinese protests from Facebook, the BBC, Voice of America News (VOA), and its own services, and the Vietnamese people are very well aware that their own authoritarian rulers do not want them to know about the uprising across the border:

“Demonstrations in China would affect Vietnamese people’s thinking,” a Hanoi businessman who declined to give his name so he could speak freely, told Radio Free Asia. “They would encourage our people’s aspiration towards a change, especially given that the Vietnamese government has shown its lack of determination in protecting people’s interests in recent scandals related to banks.”

Authorities may be nervous because in recent weeks Vietnamese have staged protests in some cities to demand payments from banks and securities firms after the arrests of real estate tycoons for alleged financial fraud.

Coverage of the Chinese uprising in Vietnamese media has been very minimal – RFA cited a business news website that labored mightily to avoid telling its readers exactly why China’s stock markets are down – while Vietnamese Communist censors are working as hard as their counterparts in Beijing to block foreign news of the protests.

“Coverage of the protests broadcast by CNN in Vietnam were replaced by a ‘weak signal’ message on screen,” RFA noted, offering a bit of amusement among the totalitarian drama.

Some Vietnamese activists mocked their government for its futile effort to stem the tide of news flowing in from China. A Facebook influencer named Duong Quoc Chinh told RFA the Vietnamese regime should just throw in the towel and cover the protests through state media because Hanoi’s laughably ineffectual censorship efforts make it look like a feeble puppet of Beijing.

The far-left New York Times (NYT) newspaper pointed out on Monday that economic disruptions from the China protests, and the lockdowns that inspired them, are so huge that suppressing the news is simply impossible for Asian governments.

Furthermore, the protests could present an opportunity for shrewd regional politicians, as Western companies have already begun moving operations out of China to destinations like Vietnam and India, and the current unrest might prompt them to accelerate those efforts. In other words, today is a good day for China’s competitors in providing cheap labor and lax industrial standards to renew their sales pitches to multinational corporations.

Vietnam is currently grappling with its own economic crisis, namely an aggressive “anti-corruption” drive that has paralyzed industries and shaken investor confidence.

Vietnam’s campaign against graft was modeled after China’s incessant “anti-corruption crusades,” which tend to have a suspicious resemblance to political purges directed against dictator Xi Jinping’s enemies.

The Vietnamese effort has been aggressive enough to terrorize many officials out of approving deals with foreign companies or greenlighting domestic projects for fear they will be accused of corruption. Pharmaceuticals and energy projects were hit especially hard, leaving thousands of drugs produced in Germany or France on the verge of losing their Vietnamese licenses.

The resulting economic paralysis could very well cripple Vietnam’s play to become an alternative to China for foreign companies – and that, in turn, could create the kind of poverty and unrest that threatens the regime in Hanoi, as their subjects take inspiration from the courageous Chinese demonstrating against the even more powerful and brutal Communist tyranny next door.