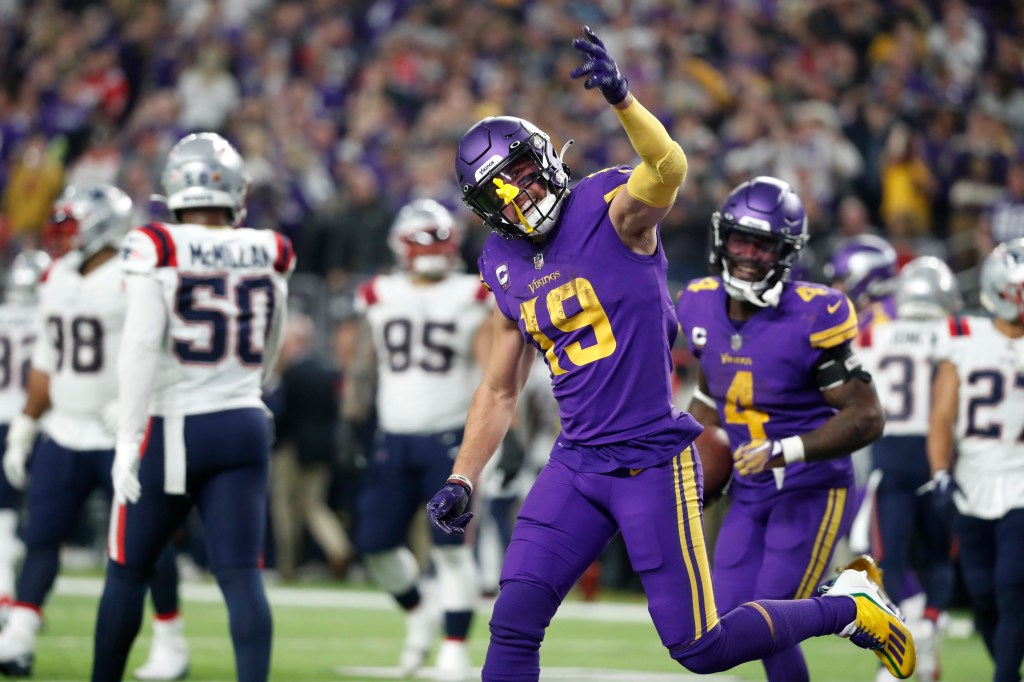 For years, Bill Belichick has impressed upon the Patriots that real football starts after Thanksgiving.

The Vikings held off the Pats in a back-and-forth 33-26 thriller in Minneapolis on Thanksgiving night, when 11 scores sparked either a tie or a lead change. Patriots quarterback Mac Jones threw for a career-high 382 yards and a couple touchdowns, but failed to complete two potential game-tying drives inside the two-minute warning.

The first died with Jones taking a third-down sack at Minnesota’s 30-yard line and then firing a deep incompletion on fourth-and-16 with 1:54 remaining. After taking two timeouts and forcing a punt, the Patriots eventually swung possession back, but a sack on their next snap dropped Jones at his own 2-yard line, and the clock ran out after a pair of completions.

Thursday’s loss snapped a three-game win streak for the Patriots (6-5), who entered having won five of their last six. They now face a critical home showdown with Buffalo next Thursday that will significantly impact their playoff odds.

In Minnesota, quarterback Kirk Cousins put a dent in postseason plans by going 30-of-37 for 299 yards, three touchdowns and an interception. All-Pro wide receiver Justin Jefferson led all players with nine catches for 139 yards and a score. Vikings wideout Adam Thielen scored the game-winning touchdown, a 15-yard catch with 9:40 left.

Both offenses went no-huddle en route to a passing touchdown on their opening possessions. Jefferson snared a short pass and snuck across the goal line just 4:20 into the game, before Jones found a wide-open Nelson Agholor down the seam for a 34-yard score. After a trade of three-and-outs, Pats cornerback Jonathan Jones picked off Cousins late in the first quarter to set up a 34-yard Nick Folk field goal.

The Vikings settled down immediately, coolly marching 72 yards to a matching field goal while they zapped 7:59 off the clock. Thanks to an ensuing Marcus Jones kick return that reached midfield, the Pats answered with a 46-yard field goal that hoisted them to a 13-10 lead. Yet Minnesota was unfazed.

Cousins commanded another long drive that finished with a 1-yard touchdown pass to tight end T.J. Hockenson off play-action. Armed with 1:30 left in the half, Jones hit Henry on a 22-yard checkdown and DeVante Parker on consecutive passes for 30 yards. But a first-down spike and second-down sack forced the Patriots to take their final timeout inside Minnesota’s 10-yard line with seconds left.

After an incomplete fade pass to Kendrick Bourne, Folk kicked a tying field goal, and the halftime scoreboard settled at 16-16.

The third quarter opened with instant fireworks, as Henry scored on a 37-yard catch-and-run, and Minnesota’s Kene Nwangwu ripped off a 97-yard kick return touchdown with the help of a missed holding penalty that kept Kyle Dugger from keeping contain. Officiating controversy continued into the next series.

Facing third-and-goal at the Vikings’ 6-yard line, Jones rifled a pass left for Henry, who was running at out route. At the catch point, Henry held the ball across the goal line, but while he was tackled to the ground, the bottom of the ball contacted the turf and momentarily spun within his loosened grasp. Then Henry immediately clutched the ball to his chest with a declared touchdown.

But Henry’s score did not survive an extended review, and Folk booted his fourth field goal to lead 26-23. Early in the fourth quarter, Minnesota’s Greg Joseph kicked another game-tying kick from 36 yards out, after Pats defensive back Myles Bryant slipped to allow a long third-down conversion and committed a personal foul to drop the Vikes inside the red zone.

Play seemed ready to settle into a fourth-quarter wrestling match, as the Patriots punted and forced Minnesota to boom it back to them. But instead, rookie running back Pierre Strong the Vikings new life by roughing the punter, and Cousins seized on that second chance three plays later with his clinching touchdown pass to Thielen.

Trailing 33-26, the Patriots punted again midway through the quarter, then sealed a Minnesota three-and-out to gain possession back with 4:21 remaining. After an opening 14-yard throw to Bourne, Jones dumped a quick screen to Stevenson, who raced 40 yards and carried the offense through midfield. But the Pats stalled out from there, undone by their chief worry entering kickoff: pass protection.

And despite an overall positive performance from their offensive line, those two sacks now leave the Patriots going backwards in the AFC playoff picture with six precious games to play.