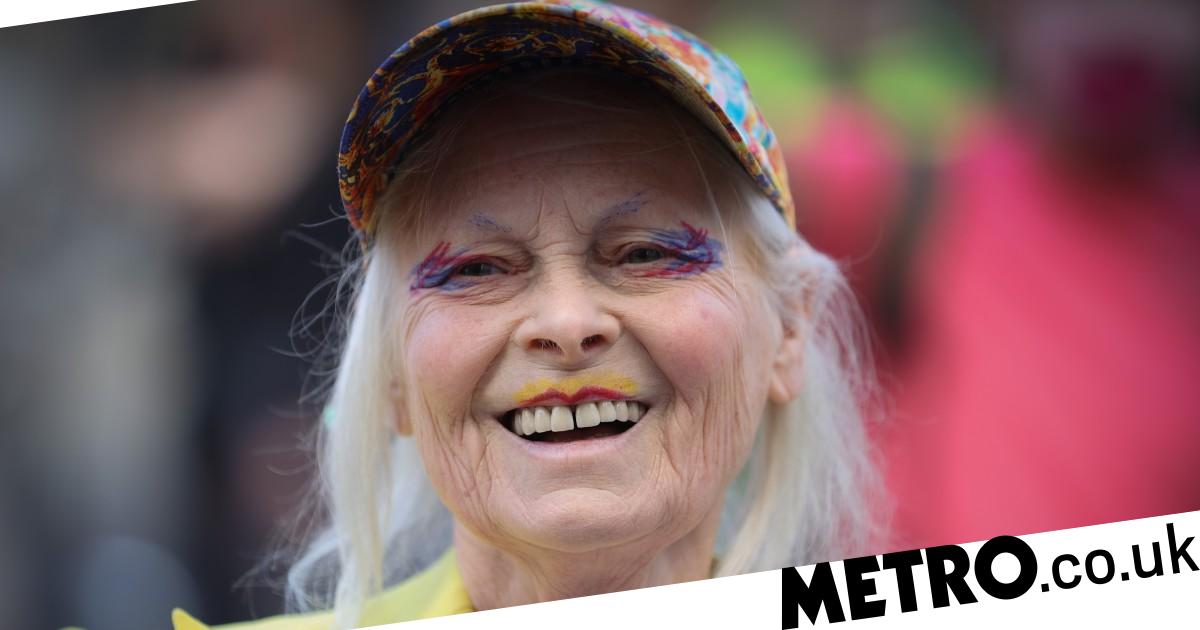 The fashion world has lost a true icon in Dame Vivienne Westwood, who was known for her vivacious personality as much as her designs.

The 81-year-old died ‘peacefully’ surrounded by her family in south London on Thursday. A cause of death has not been revealed.

Tributes have been pouring in from all corners, with Victoria Beckham, Boy George, Kim Cattrall and Jonathan Ross among the stars remembering the fashion force with fond memories.

Dame Vivienne certainly leaves an impressive fashion legacy behind, but also, a lifetime full of colourful moments that kept spectators entertained both on and off the runway.

As the world continues to mourn the iconic designer, Metro.co.uk takes a look at her most memorable moments.

When Dame Vivienne was awarded an OBE for her services to fashion in 1992, she didn’t leave her daring nature outside the gates of Buckingham Palace.

On the surface, the designer looked classic in a grey tailored skirt suit and matching hat, perfectly apt for meeting the late Queen Elizabeth II. However, upon doing a twirl for the photographers outside, they managed to capture a little more than she bargained for and snapped Dame Vivienne without knickers.

Speaking to the Daily Mail, Dame Vivienne later recalled: ‘I met a man who worked with the Queen and he said she was rather amused by it.’

Two late legends with a sense of humour, we stan.

Dame Vivienne was a pioneer of bringing punk and new wave into the world of fashion, and her designs became synonymous with the Sex Pistols, who often wore her creations.

She formed a creative – and later romantic – partnership with Malcolm McLaren, who later became the Pistols’ manager.

She later opened a shop on the Kings Road and, after trialling a variety of names for the establishment she settled on SEX.

The rest, as they say, is history and Dame Vivienne went on to open stores around the world. They are currently located in the UK, France, Italy, the US and Asia.

Dame Vivienne used her platform to highlight issues close to her heart, both politically and socially.

She was particularly outspoken in calling for the release of WikiLeaks founder Julian Assange, who is fighting to avoid being sent to the US to face charges under the Espionage Act.

In July 2020, the designer sounded a warning over an Assange ‘stitch-up’ while dressed in canary yellow in a giant bird cage. She led a colourful group of protesters chanting ‘Free Julian Assange’ outside the Old Bailey in central London.

Suspended inside the cage, she said: ‘Don’t extradite Assange – it’s a stitch-up.’

Shaving her hair for climate change

In 2014, Dame Vivienne took a bold stand against climate change and shaved off her famous red hair.

Her spokesperson also told The Telegraph: ‘Vivienne cut her hair as we must all wake up to Climate Change.

‘She wanted to cut the red out for a while and have it white – to show she’s proud of her age.’

The fashionista also said, according to CNN at the time: ‘We face mass extinction. It’s being hidden from us because our rulers still pursue their own vested interest, they’ve been trained to think that the people do not understand what’s good for them.’

Dame Vivienne also lent her support to the Campaign for Nuclear Disarmament, animal rights charity Peta and vegetarianism. She had been a supporter of the Green Party since 2015 and is reported to have donated thousands of pounds to the party.