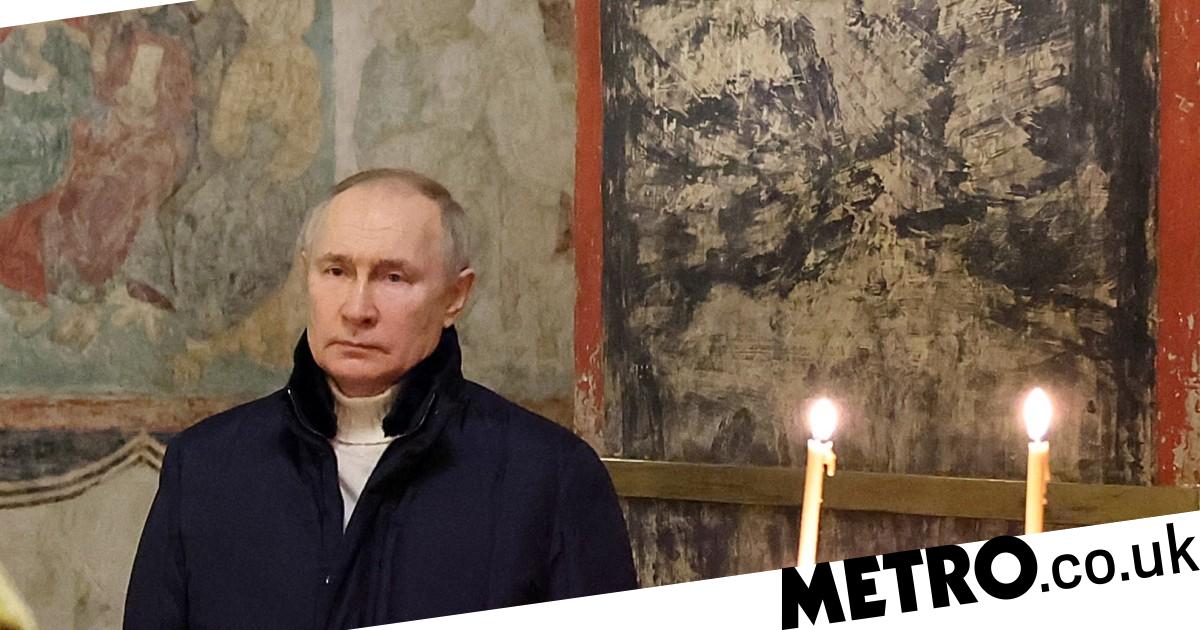 Vladimir Putin brushed off spending an Orthodox Church Christmas service with other people and instead spent it alone.

Inside the Kremlin cathedral where tsars once confessed their sins, the Russian president was the sole worshipper.

Russia’s RIA news agency said it was the first time in two decades Putin celebrated Christmas in Moscow rather than on the region’s outskirts.

State television broadcasted two clips of Putin in the Cathedral of the Annunciation as priests conducted the midnight service, the Divine Liturgy.

A dour Putin crossed himself several times and prayed in stark contrast to his cheerful Christmas message.

‘This bright, beloved holiday inspires people to good deeds and aspirations, serves to affirm in society such enduring spiritual values and moral guidelines as mercy, compassion, goodness and justice,’ he said.

Every January 6 and 7, millions of Orthodox Christians celebrate Christmas – some two weeks after their western counterparts have tucked into turkeys.

Catholic and Orthodox Christians use different calendars to mark the birth of Jesus Christ, with countries such as Ukraine and Russia seeing yesterday as Christmas Eve.

In his Christmas message today, Putin praised the Russian Orthodox Church, whose influential head Patriarch Kirill has backed his war against Ukraine.

Church organisers are ‘supporting our soldiers taking part in a special military operation’.

‘Such great, multifaceted, truly ascetic work deserves the most sincere respect,’ he added.

It comes as the Kremlin announced a 36-hour cease-fire in Ukraine to mark the Eastern Orthodox Christmas.

In an apparent truce dismissed by Kyiv as nothing but posturing, the cease-fire lasted from noon Friday to midnight Saturday.

The Kremlin said: ‘Given that a large number of citizens practising Orthodoxy resides in the areas of hostilities, we call on the Ukrainian side to announce a cease-fire and give them an opportunity to attend services on Christmas Eve and the day of Christ’s birth.’

Addressing the Russian people, Zelensky said Moscow ‘sent all of your people to be slaughtered’.

‘Everyone in the world knows how the Kremlin uses lulls in the war to continue the war with new force,’ he added.

An iconic video game adaptation, a Bridgerton spin-off and another Netflix reboot – 20 must-see TV shows in 2023