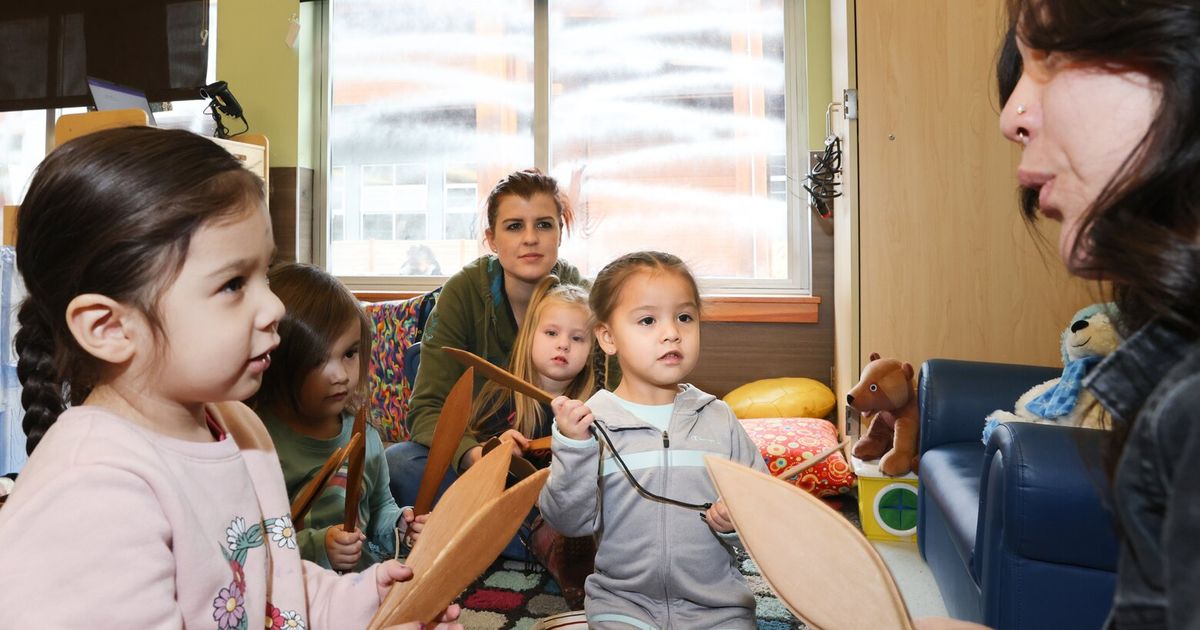 TULALIP — In the “Wolf” classroom at the Betty J. Taylor Early Learning Academy in Tulalip, a group of about a dozen preschoolers are starting their morning routine with their teacher: describing the weather outside, writing the date on the white board, and then, language lessons in Lushootseed.

This time they’re revisiting names of animals from around the region, like cougar, deer, elk and black bear. When they get to wolf, or stiqayuʔ, students say its name in English and Lushootseed — the language of several Salish tribes around Puget Sound.

And, for good measure, many of them decide to howl.

Moments like these — where a simple preschool lesson integrates a key part of tribal identity — are something that the center’s director, Sheryl Fryberg, calls foundational building blocks. They’re not only critical to the success of these children long term, but also for the future of Tulalip Tribes and others across Washington, she said.

“There are a lot of tribes in our state that have no funding for early learning,” Fryberg said.

That’s why she and other tribal early learning directors, parents and advocates are pushing for Washington lawmakers to set aside $10 million in the state’s next two-year budget to create a fund to support the needs of Native early learners.

The Tribal Early Learning Fund would be a way to help providers offer critical services that reflect their culture, Fryberg said.

The early learning and child care industry has long faced issues with funding and staffing shortages, made worse by the COVID-19 pandemic. The Tulalip center receives funding from the tribe and state and federal grants, but it faces the same challenges felt by providers across the country.

Even with hourly wages for teachers and assistants starting around or above $20 an hour with a benefits package, it’s been difficult to recruit new staff, said Michelle Cooper, the center’s education disabilities coordinator for children 3 years old and younger.

And that means families on the waitlist for a preschool slot.

Fortunately for the Tulalip center, there’s enough money to pay for new hires. According to Fryberg, 59% of the center’s funding comes from Tulalip Tribes. The tribe also paid for the building, which features a giant playground in the center of a courtyard, colorful art across windows and walls throughout the building, and classrooms well-stocked with all kinds of materials to get children engaged and excited about learning.

But the economic power of tribes varies across the state — not all of them have major businesses along an international travel corridor like Tulalip. And with many Native children out of reach geographically for reservation-based benefits, ensuring they all have access to necessary and culturally relevant services is a challenging task — sometimes impossible.

Data shows lingering gaps when it comes to meeting the needs of Native children. According to a report from the Washington State Department of Children, Youth and Families, only 34.6% of American Indian/Alaskan Native children were ready for kindergarten in all six areas of development the state measures — including literacy, math and social emotional skills — during the 2019-20 school year. The same report says 57.5% of white children met readiness benchmarks.

There’s also a growing demand for special services, something Fryberg said has dramatically increased during the pandemic.

But Fryberg and others point out that tribal communities also need funding to provide opportunities rooted in their culture, and to be able to change systems to reflect the values and traditions that tribes want future generations to carry on.

Parent advocate Rayna Espinosa, a family service coordinator at an early learning center, said she’s worked with her colleagues to change how children are screened for developmental progress. For some, not making eye contact is part of their culture, not necessarily a sign of a developmental delay, she said.

Language revitalization is another critical piece that the funding could support. Many tribes have limited resources to teach tribal languages in classrooms — Espinosa said it’s vital to be able to pay those who can teach children more of their language or buy books and materials that incorporate tribal teachings.

Advocates see the fund as an opportunity to support other aspects of tribal culture too, like addressing mental health issues stemming from generational trauma caused by forced residential schooling and relocation, incorporating more Indigenous foods into meals, creating nature-based curricula, and offering instruction in traditional arts like drumming and singing.

But deciding who can access those dollars is complicated. Tribal early learning advocates, directors and parents have spent months figuring out what the fund could look like, grappling with questions about how to serve Native children scattered across the state.

Nigel Lawrence, a campaign coordinator for the grant, says a key priority is to reach Native children and families wherever they are, regardless of which tribe they belong to. Not all tribal members live on reservations, and not all Native children in Washington are from the 29 federally recognized sovereign nations within its borders.

“There are urban Indians, urban Native American intertribal nonprofit organizations that are not part of a tribal government,” he said. Those breakups occurred because “there was a whole Indian relocation era where the federal government was trying to move Indians off reservations into big cities to assimilate.”

According to the Department of Children, Youth and Families, only about a fourth of children who identify as Native and are enrolled in the state’s Early Childhood Education and Assistance Program are in a tribal government-run facility. If lawmakers create the fund, DCYF’s Office of Tribal Relations would likely be the entity tasked with overseeing the grant application and administration process.

The amount advocates are asking lawmakers to set aside for tribal early learning is a small fraction of the state’s multibillion-dollar budget. They’re asking for $10 million to support one-time grants, with $5 million available each year of the biennium.

It also isn’t guaranteed, as state budget writers must navigate competing demands for state spending amid inflation concerns and as pandemic-era relief funding comes to an end. But because Gov. Jay Inslee included the fund in his proposed budget, and because lawmakers have signaled interest in prioritizing early learning needs, advocates are optimistic.

Even so, $10 million in one-time grant funding is not nearly enough to ensure all Native children in Washington have access to facilities with as many options or services like those offered in Tulalip, advocates say.

But, Fryberg said, it’s a step toward laying a stronger foundation for families and their future.