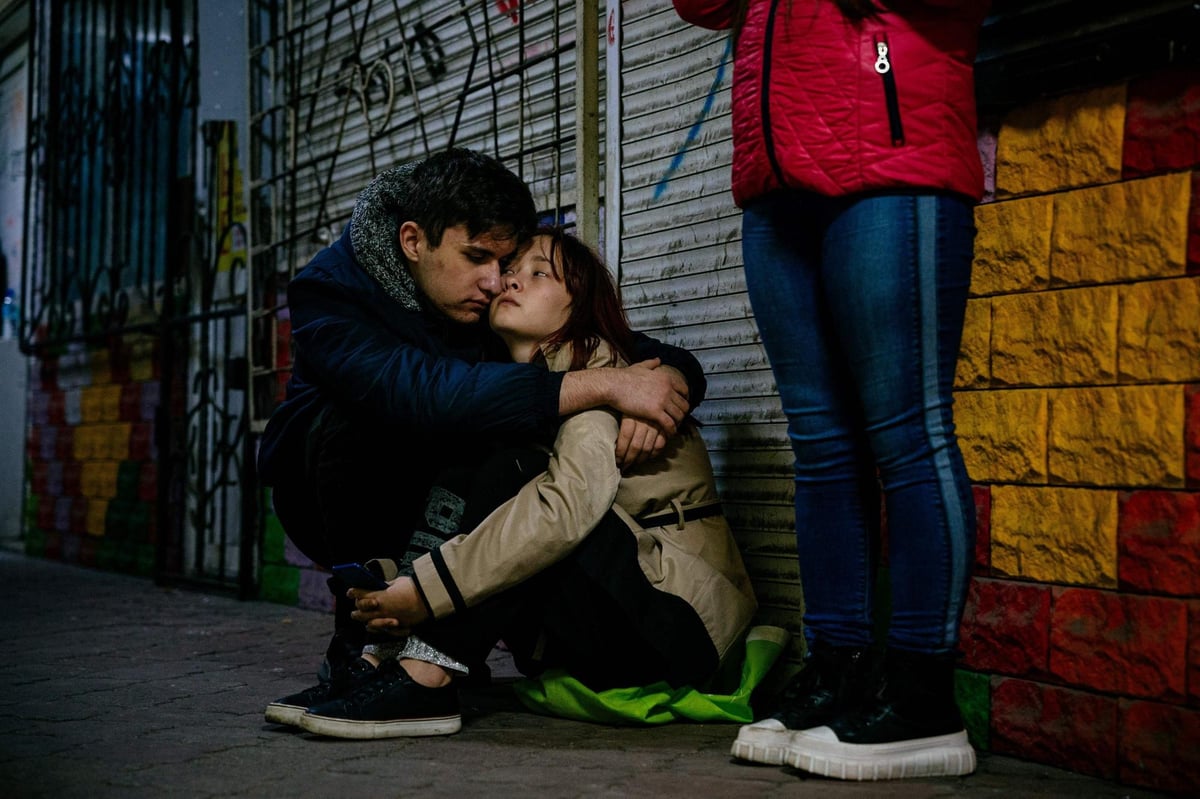 The strikes came on Thursday just hours after Ukrainian president Volodymyr Zelensky announced the country’s military had retaken three more villages in one of the regions illegally annexed by Russia.

Governor Oleksandr Starukh wrote on his Telegram channel that many people had been rescued from the multi-storey buildings, including a three-year-old girl who was taken to hospital for treatment.

Zaporizhzhia is one of four regions that Russian president Vladimir Putin annexed in violation of international laws on Wednesday, and is home to a nuclear plant that is under Russian occupation. The city of the same name remains under Ukrainian control.

A young couple hugs while hiding in an underground during an air alert in Zaporizhzhia. Picture: Dimitar Dilkoff/AFP via Getty Images

The head of the UN’s nuclear watchdog is expected to visit Kyiv this week to discuss the situation at the Zaporizhzhia facility after Mr Putin signed a decree on Wednesday declaring Russia was taking over the six-reactor plant.

Ukraine’s Foreign Ministry called it a criminal act and said it considered the Russian leader’s decree “null and void”. State nuclear operator Energoatom said it will continue to operate the plant.

Rafael Grossi, director-general of the International Atomic Energy Agency, plans to talk with Ukrainian officials about the Russian move. He will also discuss efforts to set up a secure protection zone around the facility, which has been damaged in the fighting and seen staff including its director abducted by Russian troops.

Mr Grossi will travel to Moscow for talks with Russian officials after a stop in Kyiv.

Meanwhile, leaders from more than 40 countries met in Prague on Thursday to launch a “European Political Community” aimed at boosting security and prosperity across the continent, a day after the Kremlin held the door open for further land grabs in Ukraine.

Speaking in a conference call with reporters, Kremlin spokesman Dmitry Peskov said “certain territories will be reclaimed, and we will keep consulting residents who would be eager to embrace Russia”.

He did not specify which additional Ukrainian territories Moscow was eyeing, and would not say if the Kremlin planned to organise more of the “referendums” in Ukraine, which the Ukrainian government and the West have dismissed as illegitimate.

The precise borders of the areas Moscow is claiming remain unclear, but Mr Putin has vowed to defend Russia’s territory – including the annexed regions – with any means at his military’s disposal, including nuclear weapons.

In his nightly video address, President Zelensky said the Ukrainian army recaptured three more villages in the Kherson region. Novovoskrysenske, Novohryhorivka, and Petropavlivka are all situated north-east of Kherson.

Ukrainian forces are seizing back villages in Kherson in humiliating battlefield defeats for Russian forces that have badly dented the image of a powerful Russian military and added to the tensions surrounding an ill-planned mobilisation.

Sebi cancels registration of Brickwork Ratings; directs it to wind down operations in 6 months