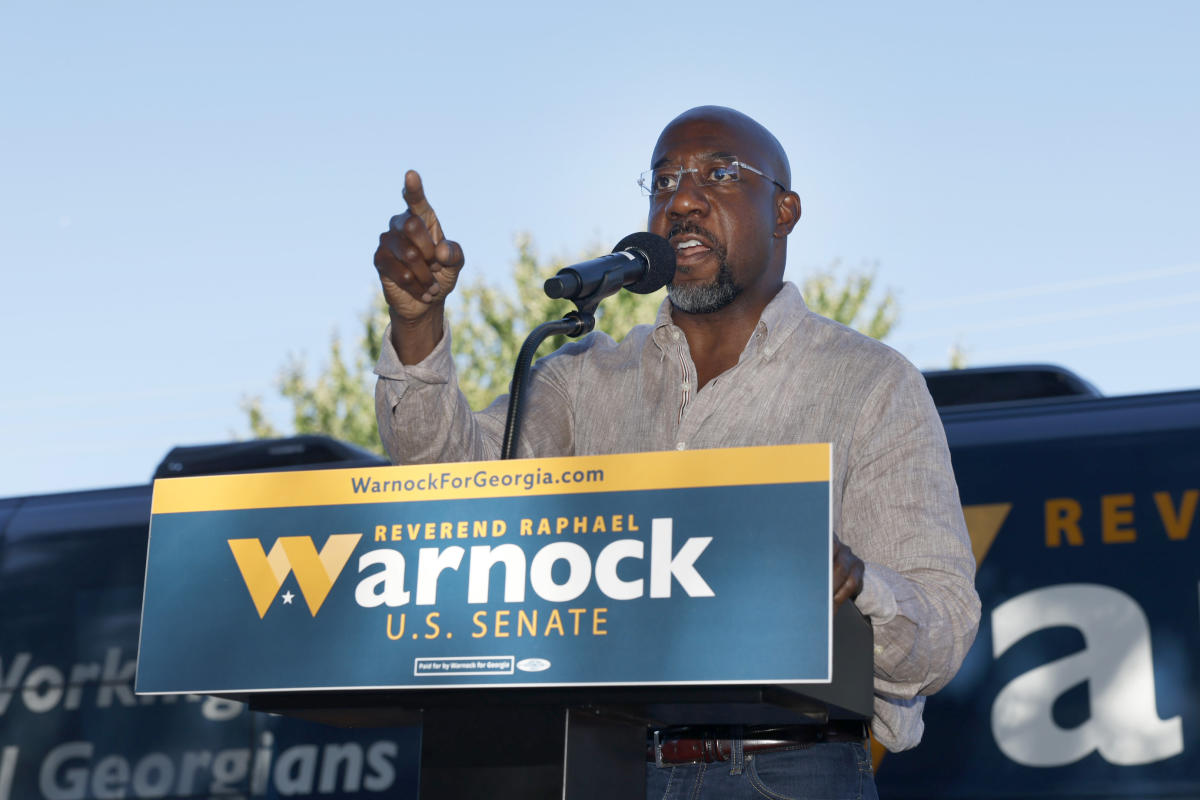 “What we are hearing about my opponent is disturbing,” Warnock told Yahoo News following a rally in his hometown of Savannah. “And I think the people of Georgia have a real choice about who they think is ready to represent them in the United States Senate.”

Walker, a former football star and Heisman Trophy winner who was handpicked to run for the Senate by former President Donald Trump, has denied he ever paid for a woman to get an abortion, but, according to the Daily Beast, the unidentified woman claims to be the mother of one of Walker’s four children.

With abortion rights now playing a central role in the midterm elections, and control of the U.S. Senate once again hanging on the possible outcome in Georgia, Warnock used the first stop of a three-day “Working for Georgia” bus tour to make his position on abortion clear.

“I believe in a woman’s right to choose,” Warnock said to a crowd of about 100 supporters gathered in a parking lot across the street from a Baptist church just two blocks from where he grew up. “I have a profound reverence for life. That’s why I voted to expand Medicaid. … I also have a deep reverence for choice.”

“A patient’s room is too small for the patient, her doctor and the United States government,” he added.

One month out from midterm election day, multiple polls show a potential shift in the Georgia electorate following this week’s news. In a SurveyUSA poll released on Wednesday, Walker, who had previously been polling neck and neck with the senator in recent weeks, now trails Warnock by 12 points — 50% to 38%. The poll, which was conducted between Sept. 30 and Oct. 4, partly before the abortion story came out and partly after shows that any shifts in momentum in what had been a tight race could prove significant.

“Senator Warnock won his election last year by less than 100,000 votes,” Atlanta-based political strategist Fred Hicks told Yahoo News in an email. “At this stage, any poll that shows a 3% or higher performance for Senator Warnock would represent an increase in his share of the vote from last year.”

“There’s a bedrock number of people who are going to vote Democrat or Republican, no matter what,” he added. “This election is going to expose exactly what the floor is for Republicans in Georgia.”

Another InsiderAdvantage/Fox 5 poll of likely voters, which was conducted Tuesday evening, the night the Daily Beast published its first story on Walker and the abortion, shows Warnock with just a 3-point lead — 47% to 44%.

In response to the allegations that Walker paid for a woman to have an abortion, many national Republicans have doubled down on their support for the former football great, seeing him as vital to their prospects of wresting back the Senate from Democratic control.

“When the Democrats are losing, as they are right now, they lie and cheat and smear their opponents,” Sen. Rick Scott, R-Fla., chair of the National Republican Senatorial Committee, said Tuesday in a statement.

“That’s what’s happening right now,” Scott continued. “They know they are on the verge of losing the Senate, and they know that Herschel Walker is winning, so they have cranked up the smear machine.”

Conservative commentator and former National Rifle Association spokesperson Dana Loesch used more pointed language in her support for Walker. Though she is also anti-abortion, Loesch said Walker may have paid one “skank” for an abortion, but Warnock wants to use “all of our monies to pay a whole bunch of skanks for abortions.”

“I don’t care if Herschel Walker paid to abort endangered baby eagles,” Loesch said in a clip posted to Twitter. “I want control of the Senate.”

Asked if he felt he was running against Walker or the entire Republican Party, Warnock, a senior pastor since 2005 at Atlanta’s Ebenezer Baptist Church, stuck to a positive message.

While most Georgia Republicans have formed in lock-step to support the party’s nominee, some have been careful not to embrace Walker too tightly, especially given the latest allegations against him.

Georgia Republican Gov. Brian Kemp pledged support to the GOP ticket in the state Tuesday, but made no mention of Walker.

“The governor is laser-focused on sharing his record of results and vision for his second term with hardworking Georgians and raising the resources necessary to fund the advertising, ground game and voter turnout operation needed to ensure Republican victories up and down the ballot on Nov. 8,” Kemp spokesman Cody Hall told the Atlanta Journal-Constitution.

Walker’s top GOP primary rival, Gary Black, Georgia’s commissioner of agriculture, said in May that he couldn’t vote for Walker given allegations of domestic violence made against him by a former spouse.

“Anybody who has put their hands on women like he has and has been unaccountable, has not taken responsibility for his actions — says he wrote a book, but then he won’t come clean on the rest of it — he hasn’t earned my vote,” Black told AJC in reference to Walker’s explanation Thursday morning in an interview with conservative radio host Hugh Hewitt when he was asked if he had paid for a woman’s abortion.

Ultimately, however, abortion rights may be a lesser concern for most voters than determining control of the Senate.

“The folks who are pushing or fueling the Walker campaign, whether it’s by word or by deed, are simply trying to control power,” Democratic strategist Antjuan Seawright told Yahoo News. “Herschel Walker just happens to be the vehicle that they’re using to get to that place.”

Army could be called in to drive ambulances and staff…

The GOP’s great Trump reckoning begins at the state…