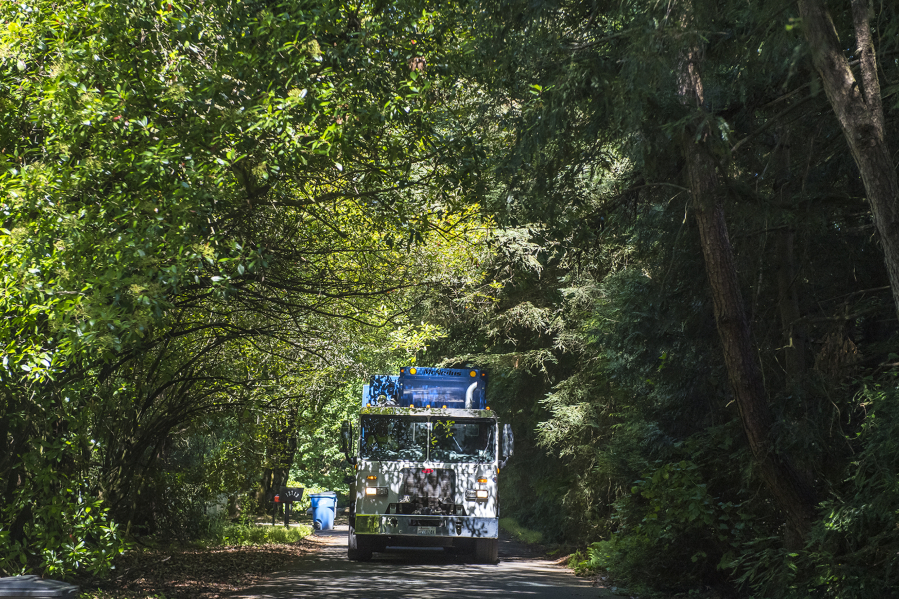 Clark County residents living in Battle Ground, Yacolt and La Center may have noticed some disruptions to their trash and recycling collection in the past month, but those troubles should be fixed soon, according to Waste Connections of Washington.

Waste Connections said it had to make changes to its collection services to keep pace with the county’s rapid growth.

Derek Ranta, district manager for Waste Connections, said the company launched two projects last month. The first was to provide customers in those cities with new, automated trash carts. Instead of one or two workers riding on the back of the truck and picking up and emptying the cans by hand, “grabbers” or extendable arms lift the trash carts and dump them into the collection truck.

“It’s part of a two-year program to provide automated carts to the remainder of Clark County residents. In the cities of Vancouver, Ridgefield, Camas, Washougal — they’ve had automated services for everything over the years, and it just hadn’t been done (elsewhere) to this point,” Ranta said Wednesday.

The new carts are part of Waste Connections efforts to modernize its collection system. Ranta said the carts are more convenient, too.

“Customers have a wheeled cart that can be more easily rolled out for service,” he said. “It doesn’t change their service level at all.”

Ranta said the change in carts affected around 25,000 homes.

The second project, which was changing and updating collection routes, affected a much larger number of customers.

“We had to reroute 75,000 homes in Clark County,” he said. “We had to balance our routes because of the growth over the years.”

One example was Battle Ground, where customers have had their garbage picked up on Fridays for at least 25 years. Now, the collection day could be any day Monday through Friday, depending on where in the city a customer lives. Ranta said having one collection day for the city worked well when there were just a few thousand customers.

“As it has grown in population, we’ve had to expand how much resources we put into there on a day-to-day basis. We just simply can’t service all of Battle Ground on a Friday anymore.”

The changes in collection dates left many customers confused and frustrated. Felida resident Ken Rone said he was given conflicting answers.

“Conflicting instructions and responses from each customer service person I have spoken with. The drivers have a third version,” Rone said.

Deborah Jones, who lives in rural Vancouver, said she and her neighbors went weeks without their recycling picked up.

“We don’t have a problem with the change in service days, but the lack of clarity in communication around all this is appalling. I do know what day to expect them but have no idea about what is being picked up when or why they didn’t actually pick up when they said they did,” Jones said.

Changing the collection days in one city meant the entire system had to be updated. Ranta said the company tried to notify customers ahead of the changes, sending out thousands of email flyers and calendars, but based on the number of calls they’ve received some were obviously lost along the way.

“Initially, we thought maybe people just hadn’t read the mailer but maybe something happened in that process where … they did not get mailed out. They didn’t get to their homes for some reason or another. We’re not sure exactly what happened,” he said.

For customers still experiencing issues, Ranta said it’s best to use to the RecyleRight app to check your service day. Although the calendar function for recycling on the app was previously incorrect, Ranta said it should be working by Friday.

Residents can also call customer service. During the route rescheduling, the call center had been experiencing high call volumes with long hold times, but Ranta said call volumes should be back to normal now.

“At this point, most of the issues that occurred have already happened. The bulk of them are done,” he said.

Royal family tree: How many children and grandchildren does the Queen have, their ages, and who’s in line for the throne?