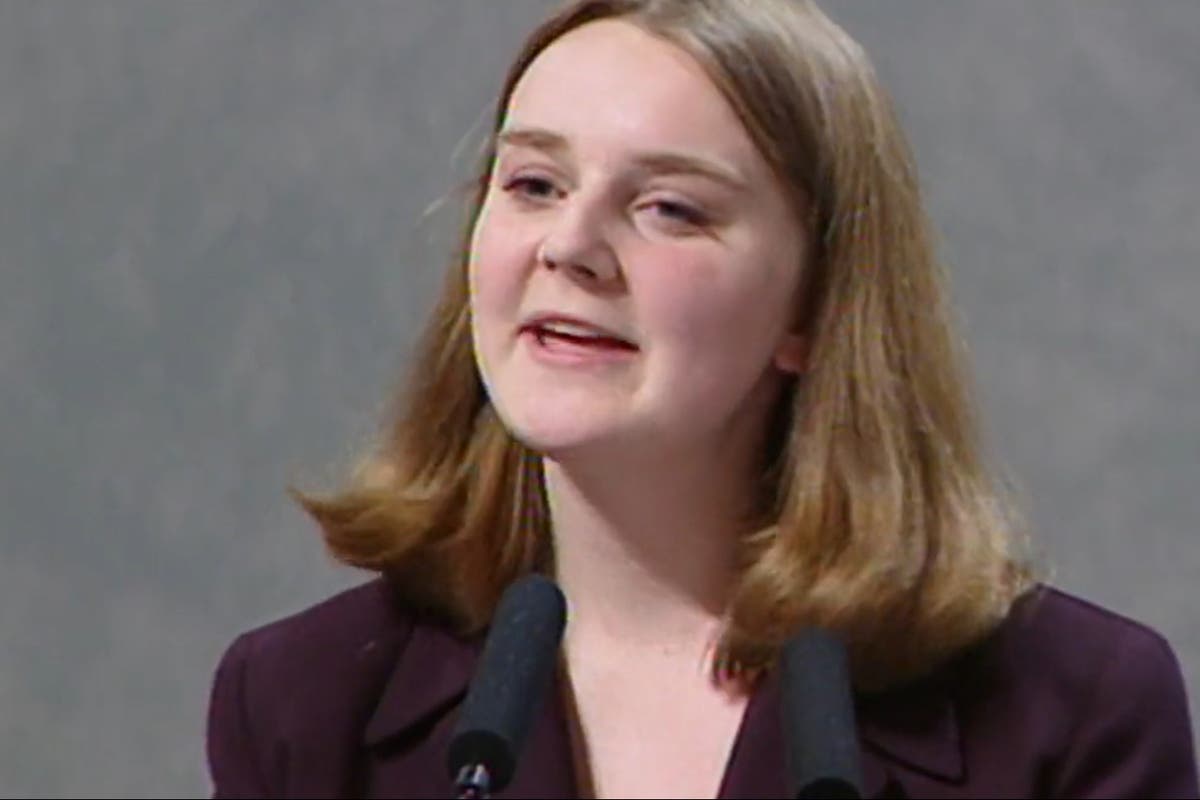 video has resurfaced showing a teenage Liz Truss railing against the monarchy in a tub-thumping speech at a Liberal Democrats conference.

The Foreign Secretary is battling with Rishi Sunak to become the next Tory leader and prime minister making it through the final ballot of Conservative MPs on Wednesday.

A short clip has since resurfaced showing Ms Truss as a 19-year-old Lib Dem activist telling her audience: “We do not believe people are born to rule.”

Newsnight tweeted the clip, filmed in 1994, as she and the ex-chancellor began a head-to-head fight to convince Tory party members they should be their next leader.

Speaking in favour of a pro-republicanism motion, she said: “We Liberal Democrats believe in opportunity for all.

“I was being interviewed by Newsnight earlier this afternoon and we were filmed asking members of the public what they thought about the Monarchy.

“We came across a group of three people. I’d say they were around 50, 60 (years of age). (They) looked fairly middle class, rather smart and in fact rather reactionary to be perfectly frank.

“We asked them they’re opinion of the monarch, do you know what they said? They said: ‘Abolish them. We’ve had enough’.”

Quoting then Lib Dem leader Paddy Ashdown’s belief that everybody in Britain should “have the chance to be somebody” she added: “But only one family can provide the head of the state.

“We Liberal Democrats believe in opportunity for all. We do not believe people are born to rule.”

Ms Truss later explained her thinking as a young activist to the BBC’s Nick Robinson.

“I think it was fair to say that, when I was in my youth, I was a professional controversialist and I liked exploring ideas and stirring things up,” she told the BBC’s Political Thinking With Nick Robinson.

It came as Ms Truss denied modelling herself on Margaret Thatcher, going as far to say such comparisons are “frustrating” despite similar photo opportunities.

Ms Truss donned military gear and perched in a tank for pictures during a visit to Estonia, echoing an image of former prime minister Mrs Thatcher in a tank in West Germany in 1986.

More recently, an outfit worn at one of the televised leadership debates bore uncanny similarities to the attire of Mrs Thatcher.

But on Thursday, Ms Truss tried to scotch any notion of a conscious attempt to model herself on the decade-defining PM.

She told BBC Radio 4’s Today programme: “I am my own person.

“I’m from a very different background. I grew up in Yorkshire. I went to a comprehensive school. I am somebody who has worked all my life to get things done. And that’s what I want to do in the job.”

Ms Truss went further in an interview with GB News later on Thursday morning, calling any suggestion of a resemblance between the two women “frustrating”.

“I think we need to equalise the scales,” she joked.

Boy, 12, almost lost his testicle after being thrown over handlebars of his bike