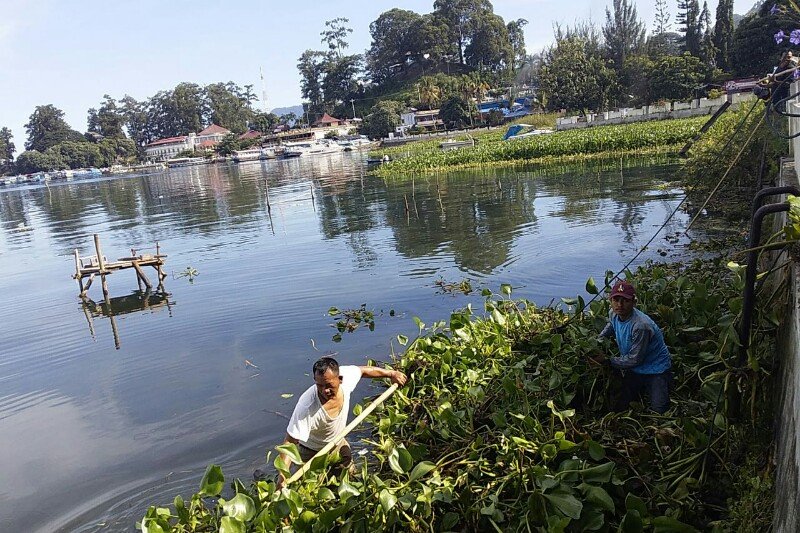 The existence of water hyacinths has, since long, been a cause for concern in Lake Toba, North Sumatra, since the species is viewed as weed that is invasive in nature and pollutes the area.

As a priority tourist destination, Lake Toba is expected to be managed and improved well, for which environmental problems, including those posed by water hyacinths, should be resolved at the earliest.

Although it is known to be a nuisance, several people have succeeded in using this plant as a derivative product, including in handicrafts, which can be sold at a high value.

Breakthroughs and innovations are necessary to ensure that Lake Toba, as a priority tourist destination, can be developed in terms of quality and sustainability.

To meet those ends, the Coordinating Ministry of Maritime Affairs and Investment collaborates with private sector players — PT Mayora Indah Tbk and the Del Institute of Technology — to work together to utilize and process water hyacinths in Lake Toba. The two parties will work together to build a water hyacinth processing facility that would produce liquid and solid fertilizers from the plant.

It is expected that in future, this business will have a positive impact in terms of reducing the growth rate of water hyacinth that was initially considered as weed that polluted Lake Toba. The plants will be processed into fertilizer products that are expected to fulfill the needs of farmers in Toba and the surrounding areas.

This cooperation in the water hyacinth processing plant was also supported by the Toba Government, North Sumatra Province.

Water hyacinth had become a cause for concern for many, given its very rapid rate of growth, with a capacity of going from 100 m2 to 200 m2 in a period of just seven days.

“Our grand dream is to make Lake Toba a (good) quality destination. (To achieve that), we need to pay close attention to everything that hinders progress in that direction. Regarding water hyacinth, we see that they reduce the aesthetics of the lake. We hope this program would improve the (beauty) of the lake as well as provide added value in the form of organic fertilizer to the public,” Harefa stated.

So far, the water hyacinth population appears to dominate the waters of Lake Toba, thereby diminishing the aesthetic value of that top-priority tourist destination area.

On the other hand, water hyacinth contains nutrients, such as 2.34-percent nitrogen, 0.24-percent phosphorous, and 1.95-percent potassium, as well as humic acid that produced phytonutrient compounds that can accelerate the growth of plant roots. These elements can be used as organic fertilizer that will greatly benefit farmers.

In addition, there is a price disparity between subsidized and non-subsidized chemical fertilizers. Hence, the water hyacinth utilization program will also provide organic fertilizers at competitive prices to farmers on top of making the lake look aesthetically pleasing again.

Harefa said the water hyacinth processing facility will be built in the Del Institute of Technology Campus that will be divided into two stages. A harvester ship belonging to the Sumatran II River Office will collect the water hyacinths.

“Next, the water hyacinth will be collected in a temporary shelter and will be taken to a processing site,” he remarked.

The use of water hyacinths as organic fertilizer can offer two positive results in the form of reducing the water hyacinth population that pollutes Lake Toba as well as making them a raw material for compost production, which will be done through the decomposition process carried out by microorganisms on organic waste.

In fact, water hyacinths simultaneously present both a problem and a solution to the issue of their presence all over Lake Toba.

Through collaboration, a fertilizer processing facility will be built in the Del Institute of Technology Campus, with a land area of approximately one thousand square meters that includes a processing area, storage area, and transportation areas.

Construction of the factory will be divided into two stages, with the first being the water hyacinth to solid fertilizer processing plant, while the second one will be its counterpart for processing into liquid fertilizer. All these production processes will be conducted in the area and under the supervision of Del Institute of Technology.

This processing will commence with the extraction of water hyacinth by deploying a harvester vessel belonging to the Sumatran II River Office.

Subsequently, the water hyacinth will be kept in a temporary shelter and will be brought for processing.

Some 40 tower composters, with each having a volume of 500 kilograms, will take 20 days to process water hyacinths into solid fertilizer.

Expectations ride high on this project being a solution to the problem of water hyacinths covering the Lake Toba waters in addition to addressing the issue of lacking fertilizer supply faced by farmers while also making Lake Toba a destination developed on the basis of the concept of environmental sustainability.

Should it succeed, the efforts are expected to be emulated in aquatic areas or other tourist destinations in Indonesia.