“We are suffering:” Employees at Faulkner Hospital in Jamaica Plain demand better pay 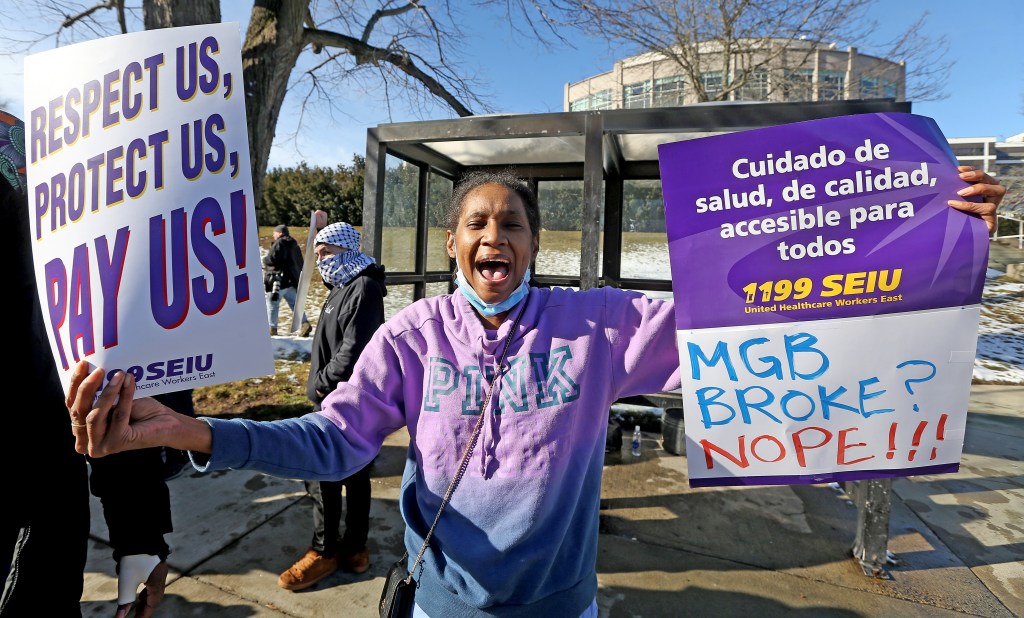 As a staffing shortage continues at Brigham and Women’s Faulkner Hospital, roughly 100 healthcare workers walked out of the Jamaica Plain facility to demand better pay and working conditions.

“We are coming here to make sure that everyone gets the highest quality of care and make sure patients go back home to their families,” said Tyler Wells, an operating room assistant who helped stage the walkout during lunch break Tuesday. “We would like to provide for our families.”

Many of the workers who participated in the hour-long protest are among the lowest paid at the hospital, earning as little as $15.45 an hour. The positions include personal care attendants, unit service techs, dietary workers, and mental health workers, among others.

The workers who walked out are members of the 1199SEIU United Healthcare Workers East union, which is seeking to win a $2 raise for all the positions it represents, an official said.

A four-year contract that was set to expire last September was extended until this February, but the union says hospital officials have stalled in negotiations.

“Our goal has been, and remains, to reach a fair agreement that supports and recognizes the critical work of our staff in providing high-quality care to our patients. We continue to work towards that goal,” said Laura Barnett, Faulkner’s executive director of human resources.

Many hospital employees who have worked at Faulkner for 15 years or more haven’t seen substantial pay raises throughout their tenures, with some still earning just $16 per hour, Wells said. That has spurred what workers describe as a staffing crisis.

Just 513 Faulkner workers are members of the 1199 SEIU union, down from the 620 that the union saw pre-pandemic in February 2020, an official said.

To overcome the staffing challenges, Brigham and Women’s is depending on ‘travelers,’ healthcare employees from outside of Massachusetts who are staffed through an outside agency that pays higher rates, said Tisha Williams, a Faulkner phlebotomist. She estimates that some outside employees are making $50 more per hour than those regularly staffed.

In the background of Tuesday’s protest, construction continued on a 5-story, 98,000-square-foot addition that will include 78 new inpatient beds, clinical support and ambulatory space. The roughly $250 million expansion is also bringing the hospital a new parking garage.

“They could be paying us, but they are building buildings and garages while we are suffering,” Williams said. “There will be more for us to do without any money. How’s it going to get done?”

The fungal threat to human health is growing in a warmer, wetter, sicker world