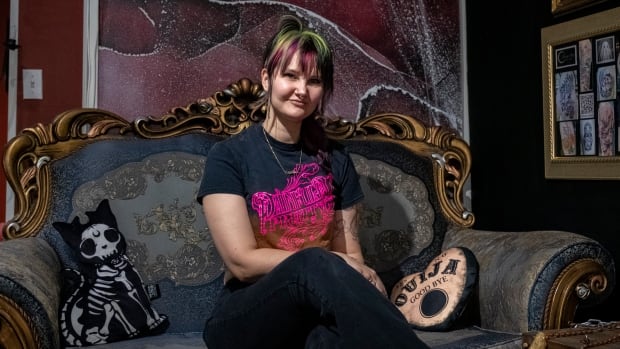 Penny (Pain) Desborough makes sure her mom, tucked under a blanket, is ready. She gets started on her tattoo as other artists share their support for “Mama Pain” and gush over the design: a black and grey barn owl, with protection herbs and an astrology wheel.

Desborough runs Painfully Pretty Tattoos in Saskatoon. The shop’s black walls are adorned with gothic pieces and dainty ones. The studio name glows in neon pink on the wall, like the “Bad Bitch” sign behind Desborough.

The aesthetic is traditional, but the vibe is progressive. Desborough has designed it to be a safe space.

“Tattooing is obviously such a vulnerable position that you’re putting yourself in, so it’s really important to us that people do feel comfortable,” Desborough says.

Saskatchewan women and non-binary people are transforming the local tattoo industry. Artists say it has historically been exclusive and patriarchal, dominated by men, and has allowed harassment and inappropriate behaviour to be pervasive.

“Where I started was definitely more grungy and dark, and it felt a lot more intimidating. I definitely found a lot more people didn’t seem as comfortable there,” Desborough says.

Now, a diverse group of artists and shop owners are carving out their own space, and simultaneously creating inclusive spaces for equally diverse clients.

Since Desborough opened her own studio in 2021, she has hired artists who embrace the same values.

“It’s taking that step forward and saying … ‘We’re going to raise the standard of what a tattoo studio should be,'” says Nicole (Devious Nik) Boczula, a junior artist at Painfully Pretty.

The artists want clients to feel at home in their shop regardless of their race, body shape, sexuality or gender.

Desborough also wants to create a healthy and inspiring work environment for staff.

It’s an evolved take on an industry established in harsher environments.

“It started a lot with criminals, sailors, bikers — all the kind of tough guy kind of areas of society,” Boczula​ says.

The studios are opposite on the spectrum of the tough “old boys club” she experienced when she was first introduced to the industry.

“When I was looking for apprenticeship, I went through a few white, cis-men, old school tattoo shops, and I heard, ‘Hey, this is not an industry for you.'”

But she’s claiming her space and helping others do the same. She says her shops prioritize hiring women and queer people, who are also anti-racist and body-positive.

Back in Saskatoon, Honey Bee Tattoo Collective’s minimal white walls and forest of plants are opposite the aesthetic at Boo Radley and Painfully Pretty, but the mission is the same: owner and artist Haley Gardiner is trying to champion inclusiveness and accessibility, picking her space for its welcoming atmosphere and elevator access.

Speaking over the buzz of an artist at work, Gardiner says it feels almost surreal to be in the space.

“I hit a point where I considered leaving the industry because I just didn’t feel like there was a place for me,” Gardiner says.

But she stayed, eventually opening Honeybee in 2020.

“It’s your responsibility to make this industry for everybody. We’re past gatekeeping; we’re past discrimination.”

She says BIPOC, people with larger bodies, queer people and the elderly have been excluded from and unaccommodated in the industry.

“We’re just trying to bridge that gap to say, ‘Hey, we’re here for you and we want to work with you.'”

A priority for Janowczyk is communicating to new clients what the tattoo experience should be like, “because there are still many tattoo artists who abuse their clients’ boundaries.”

There have been movements across Canada calling out violence and harassment in the tattoo industry.

Desborough says it’s “such easy territory for someone that is a predator to be in,” because people are in a vulnerable and sometimes intimidating situation. That makes it hard for clients to speak out, especially considering the artist is in a position of power.

Desborough notes within the industry there have been reports of inappropriate behaviour by artists and clients alike.

​In 2020, Regina’s tattoo scene came under scrutiny. Serious allegations of harassment and violence were posted to an Instagram account dedicated to sharing anonymous stories of sexual violence. Clients called for accountability, while artists offered support to those who said they were violated while getting inked.

As the culture shifts, studio owners are taking a more trauma-informed approach.

“I want to be transparent and have people be comfortable and end up loving themselves and their skin better afterwards,” says Arielle Racette, also known as Fox and Lamb Tattoo, who runs Lightning Bug Tattoos in Regina.

Racette, who is queer, Métis and disabled, crafted their space to meet the needs of clients who aren’t always accommodated in public spaces. They offer stim toys, which can help soothe people who have sensory sensitivities or are neurodivergent, and installed a wheelchair ramp.

Their intake form is expansive: Racette asks about several accommodations, from accessing the building to avoiding music — “anything that would make their experience better.”

These seemingly small actions — like asking how clients want to be identified before the process begins, warning when they’ll be touched and empowering them to ask questions or for a break — go a long way, says Boczula.

So do colour tests: tiny tattoos to help clients see how colour heals on their skin. Boczula​ says some people have been told they can’t be tattooed because of their skin colour or its condition.

“It gives the clients the power and information,” she says.

Body modification is intimate, involving discomfort and physical closeness. It can also be emotional, like clients who get memorial or milestone tattoos. Some have struggled with self-harm or survived violence.

Artists must understand clients are more than a canvas, Boczula​ says.

“Whatever experience you have with me in the shop is going to translate forever with that tattoo, so it’s not just the ink that’s on your body that’s there forever; it’s also the experience that we leave you with.”

Suspect in Idaho slayings not expected to fight extradition