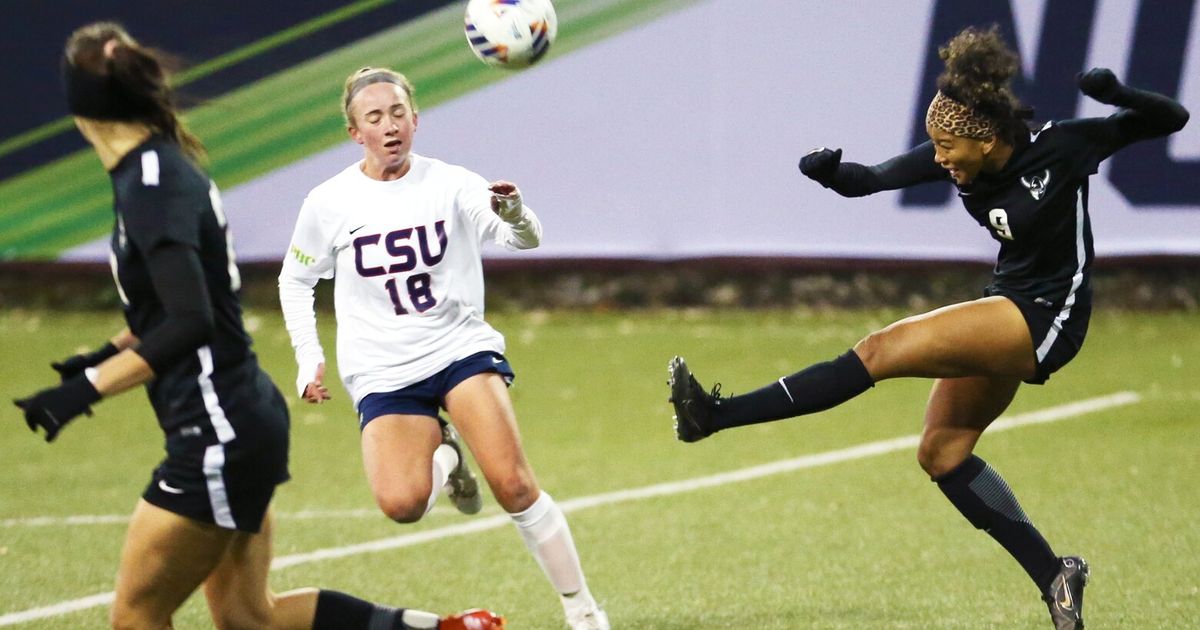 The Western Washington women’s soccer team found a way to slow down the top scoring team in the country.

That, along with first two goals of the season from sophomore Sophie Bearden Croft propelled the Vikings to 2-1 victory over Columbus State in an NCAA Division II national semifinal Thursday night at Seattle’s Interbay Soccer Stadium.

Western Washington (18-2-4), the No. 3 seed in the Final Four, will play top seed West Chester (Pa.) for the national title Saturday at 3 p.m. at Interbay.

“It was a great match between two big-time teams,” said Western Washington coach Travis Connell, who coached the Vikings to a national title in 2016 and to the title game in 2019. “I’ve got to give a lot of credit to Columbus State. They pushed us to the limit.”

Columbus State, the No. 2 seed, entered as the top scoring women’s Division II team in the country at an average of 3.87 points per match. But the Cougars (20-3-1) were facing a Western Washington from Bellingham team that was third in the nation in goals allowed at .478. a game.

Chalk one up to defense over offense in this match.

Scoring opportunities were scarce for both teams in a scoreless first half. It took nearly 33 minutes before Western Washington goalkeeper Claire Henninger faced a shot on goal, which she easily saved. Columbus State of Georgia had seven shots in the opening half, but just one on goal.

The Vikings, despite loud encouragement from the pro-Western Washington crowd, also struggled to find scoring opportunities in the first half. They had just four shots — in the first half — with two on goal.

“They really dominated the first half, to be honest, and we stayed alive,” Connell said. “We regrouped in the locker room and really challenged each other. We knew what we had to do in the second half and I’m really proud of how we turned the game in our favor.

“It wasn’t so much tactics, but it was winning battles. Some people stepped up big time.”

It took less than four minutes into the second half for Western Washington to finally get a great scoring opportunity, and the Vikings converted.

Dayana Diaz, playing in her school record 100th game, made a run down the middle toward the Columbus State goal before delivering a pass to Sophie Bearden Croft.

Croft, a sophomore from Portland, fired a curling shot into the top-left corner of the net from 12 yards out.

Then, in the 76th minute, Croft scored again from four yards out. Midfield Tera Ziemer made a run down the field before passing to Morgan Manalili. She delivered a perfect pass to Croft, who didn’t miss.

“Those two balls from Day and Morgan were absolutely perfect,” Croft said. “I didn’t have to do much. They played me perfect balls.”

Croft said it was hard to believe she scored her first goals of the season, but Connell said Western Washington assistant Jamie Arthurs wasn’t surprised as she predicted Croft would score the winning goal.

The game got much more suspenseful when Columbus State scored in the 85th minute to close to 2-1. But Western Washington, which had 15 shots in the second half to three for Columbus State, held on.

“I was so proud of how we turned it around in the second half,” Ziemer said. “In the first half, they took it to us and it was a wake-up call.

“Everyone looked at each other and it was, ‘either we play the way should or we lose.’ I am so proud of everyone.”

In the first semifinal Thursday evening, West Chester, the No. 1 seed in the Final Four, defeated No. 4 seed Ferris State 2-1. West Chester (23-0-1) earned its ticket to the national-title game by breaking a 1-1 tie on Maggie Lena’s 12-yard shot in the 65th minute.

Ferris State (12-6-7) of Big Rapids, Michigan, put on a lot of pressure in search of the tying goal and led 11-2 in shots on goal in the second half. West Chester goalkeeper Haylee McGee made a couple of nice saves in the final minutes to allow the Golden Rams to hang on.

“Amazing, awesome and I’m sure it hasn’t sunk in yet,” West Chester coach Betty Ann Kempf Townsley said about how she felt after the win. “It will, as the night goes on, but the performance tonight was just exceptional.”