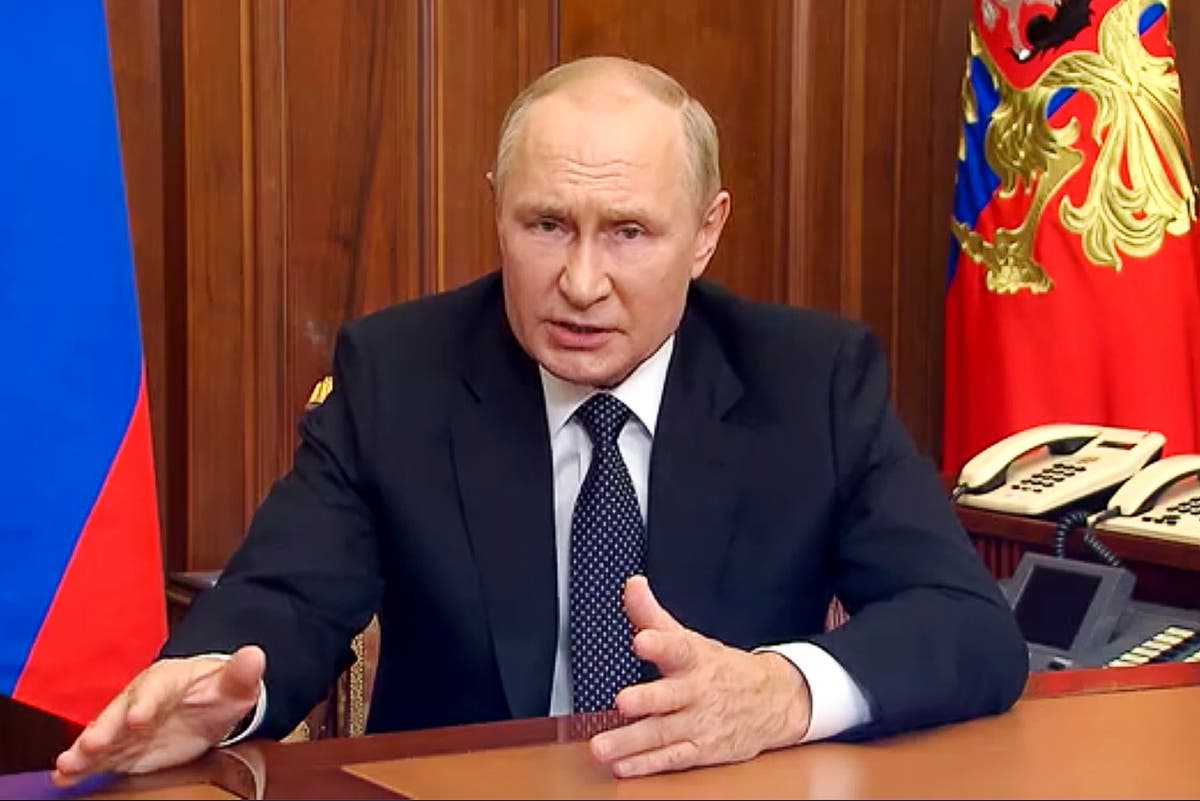 kraine and the West have condemned the votes conducted by Russian-backed officials as ‘shams’, which garnered so-called total support.

Vladimir Putin has announced Russia has “four new regions” in a speech in the Kremlin on September 30.

The Russian president declared the eastern Ukrainian regions of Luhansk, Donetsk, Kherson and Zaporizhzhia are part of Russia after internationally-condemned referendum votes as part of his invasion of the country’s neighbour.

The annexation of the four areas of Ukraine echo Russia’s similar treatment of Crimea in 2014, with the same ‘sham’ referendums and a victory speech back in Moscow.

Ukrainian President Volodymyr Zelensky described the “pseudo-referendums” as worthless and said that they did not change reality.

“The territorial integrity of Ukraine will be restored,” he continued. “Our reaction to recognition of the results by Russia will be very harsh.”

There was no independent monitoring of the five-day process, with election officials pictured walking door to door escorted by armed Russian soldiers.

The exercise took place across 15 per cent of Ukraine last Friday, with just a few days’ notice. Russian state media claimed that the use of armed guards was for security purposes, but the widely held opinion is that it was a tactic for intimidating residents.

In light of the recent events, here’s a look at what it means to annex a country or area.

What does annexing mean?

Annexing refers to a formal act of a state proclaiming its sovereignty over territory outside its previous boundaries.

Unlike cession, where territory is given or sold through treaties, annexation is an act usually decided by the dominant state, made effective by possession and legitimised through general global recognition.

As with the annexation of Crimea, Russia’s two houses of parliament will formally ratify the annexation treaties for the four areas of Ukraine next week.

In response, the US has confirmed it will impose sanctions on Russia due to the staged referendums, while EU member states are considering an eighth round of measures, including sanctions on anyone involved in the votes.

“This is the opposite of free and fair elections,” said German Foreign Minister Annalena Baerbock, describing that people in occupied regions of Ukraine had been taken from their homes and workplaces by threat and sometimes at gunpoint. “And this is the opposite of peace, it is a dictated peace.”

What areas of Ukraine is Putin ‘annexing’?

The four areas that Russia is attempting to annex are Luhansk and Donetsk in the east, and Zaporizhzhia and Kherson in the south.

Russia does not fully control any of these regions it has decided to annex, although most of Luhansk remains under Russian control. However, Moscow controls just 60 per cent of Donetsk.

This comes after Ukrainian forces have been gradually forcing Russian troops back, seven months after Russia first invaded.

The capital of the southern region of Zaporizhzhia is back under the control of Ukraine’s government, and a counter-offensive is already underway in Kherson.

Twitter Files: What Elon Musk has to say on Trump’s…

Who signed off on this? Bizarre notices will make you do a…