What time is Sun TalkTV Rishi Sunak v Liz Truss debate? How to watch TalkTV in UK, how to watch Conservative leadership debate? 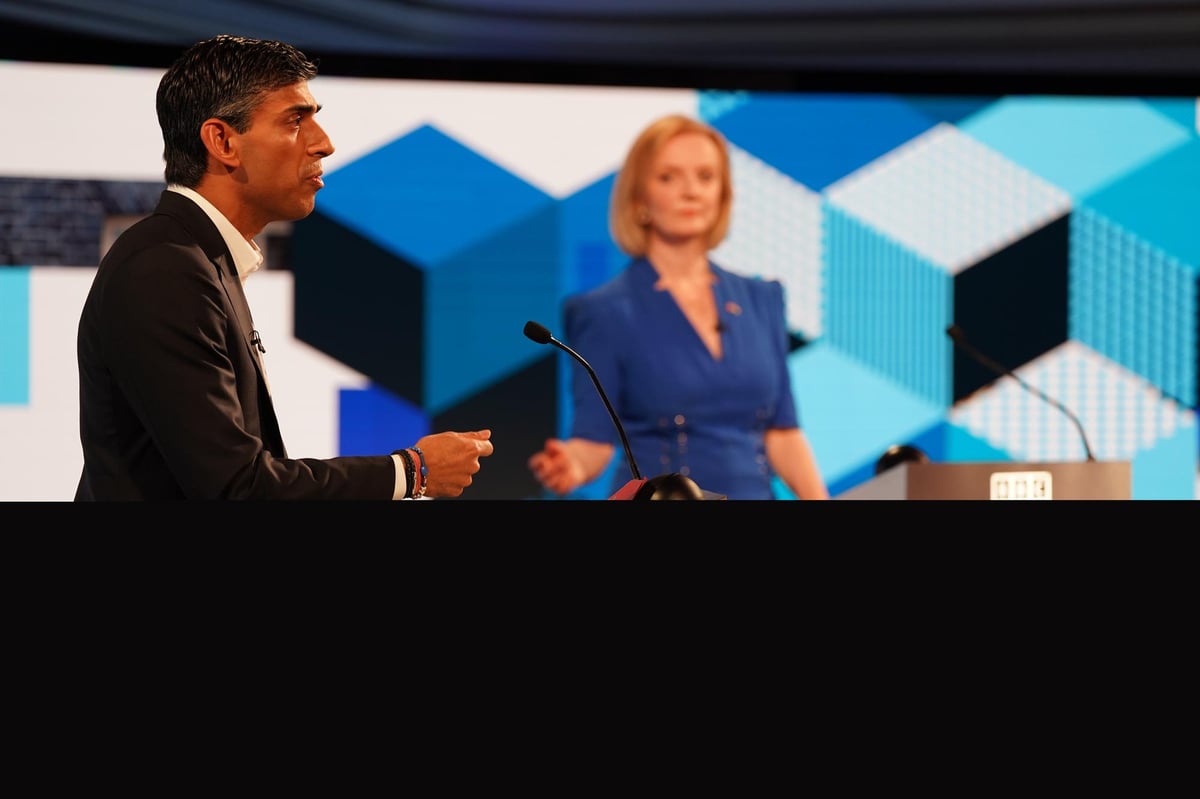 The pool of candidates were whittled down in a series of ballots by Conservative MPs before Liz Truss and Rishi Sunak emerged as the final two. They will be put to a vote of Tory members and the winner will be the United Kingdom’s next Prime Minister, replacing Boris Johnson.

Who is Liz Truss, the ‘true blue’ Tory MP and Foreign Secretary standing in the …

The second television debate was hosted by ITV and focused on a taxation row between leading candidate Rishi Sunak and rival Liz Truss who later emerged as the final candidates.

Last night, the pair clashed on the BBC’s Our Next Prime Minister programme.

And tonight is the second in a series of head-to-head television debates between Rishi Sunak and Liz Truss. Here’s what we know…

What time is Conservative leadership debate and what channel is it on?

The programme is called The Sun’s Showdown: The Fight for No.10 and will be broadcast live on The Sun’s website and TalkTV at 6pm for one hour.

The debate was due to be co-hosted by The Sun’s Political Editor Harry Cole. However he confirmed this morning he is pulling out after testing positive for coronavirus.

The Sun’s Editor-in-chief, Victoria Newton said: “This is an important chance for Sun readers to quiz the two contenders vying to be their next PM, and ask questions about the issues that matter most to them and their families.’’

Head of TV, News Broadcasting, Richard Wallace says: “TalkTV is proud to be showcasing The Sun’s critical all-live debate to decide the country’s next Prime Minister.

“This synergy between The Sun and TalkTV will give the UK a great opportunity to see the candidates put through their paces.”

Liz Truss said: “I’m looking forward to giving my pitch directly to Sun readers on how I’ll lower their taxes, reduce pressure on their food and energy bills, and lead us to victory over Labour at the next election.”

Liz Truss and Rishi Sunak who have made it through to the final two in the Tory leadership race and will face one another in a head-to-head TV debate tonight.

Rishi Sunak said: “Over the last two years I’ve shown I’m on the side of Sun readers, cutting beer duty, cutting fuel duty and cutting taxes for workers and for those on Universal Credit. I’m excited to meet them and speak to them about what I will deliver for them as Prime Minister including beating Keir Starmer at the next election.”

How do I watch TalkTV in the UK?

What have Liz Truss and Rishi Sunak said?

Liz Truss and Rishi Sunak will clash on TV for a second time in 24 hours after the first head-to-head debate saw the two contenders to be the next prime minister tear strips off each other over their economic plans.

Rishi Sunak and Liz Truss before taking part in the BBC Tory leadership debate, Our Next Prime Minister, presented by Sophie Raworth, a head-to-head debate at Victoria Hall in Hanley, Stoke-on-Trent, between the Conservative party leadership candidates.

The Foreign Secretary, who is celebrating her 47th birthday on Tuesday, and the former chancellor will face each other in a TalkTV/Sun event at 6pm, with both sides hoping to learn tactical lessons from the BBC clash on Monday night.

That showdown saw the two rivals for the Tory leadership trash each other’s economic plans, while personal attacks continued with Mr Sunak accused by allies of Ms Truss of “mansplaining” during the debate.

Mr Sunak claimed there is “nothing Conservative” about Ms Truss’s approach to cutting taxes and pumping up borrowing, arguing it would give the party “absolutely no chance” of winning the next election.

Foreign Secretary Ms Truss, in turn, suggested her rival would lead the country into a recession and criticised him for increasing taxes to the “highest rate in 70 years”.

On China, Ms Truss accused her rival of “pushing for closer trade relationships” while Mr Sunak said “Liz has been on a journey” to get to a point where she opposes closer ties.

Mr Sunak also sought to stress his decision to quit Mr Johnson’s government as a sign he acts according to his principles while Ms Truss stressed her loyalty to her current boss.

But both candidates ruled out a job for Mr Johnson in their cabinet, with Ms Truss saying she believes he “needs a well-earned break” before eventually adding: “I am sure he will have a role, I am sure he will be vocal but he will not be part of the government.”

Mr Sunak was more direct in his reply by saying: “The simple answer for me is no.”

A snap poll by Opinium, based on a sample of 1,032 voters, found 39% believed Mr Sunak had performed best compared to 38% for Ms Truss, but crucially Tory voters split 47% to 38% in favour of the Foreign Secretary.

With postal ballots set to arrive on Tory members’ doorsteps by August 5, Mr Sunak needs good performances in the debates and the early hustings.

Opinion polls and member surveys have suggested that he trails Ms Truss in the battle to win the votes of card-carrying Conservatives, with the Foreign Secretary the bookmakers’ favourite to be elected as Tory leader on September 5.

Former Cabinet minister David Davis, who supports Mr Sunak, said Ms Truss’ policies would risk fuelling inflation, leading to the Bank of England being forced to increase interest rates as high as 7% – hitting people with mortgages and other debts.

“It will care about things like their offspring having to face these sorts of interest rates in the future, so that matters.”

He rejected suggestions from allies of Ms Truss, including Work and Pensions Secretary Therese Coffey, that Mr Sunak had been “mansplaining” and talking over his rival.

He added: “We need the person who a) knows what he stands for, b) is courageous enough to take the difficult decisions and c) determined enough to do it.

Cabinet minister Simon Clarke, an ally of Ms Truss, said: “I think there were some pretty aggressive moments at the outset from Rishi towards Liz in terms of interrupting her as she tried to set out her case but, by and large, I think the debate was held in a reasonable spirit reflecting, obviously, the importance of the issues.”

He told Sky that putting the Covid-related debt in a separate category would give the ability to pay it back over a longer period, allowing more flexibility with day-to-day spending.

But he added: “There will be decisions to be taken on wider levels of government spending across the board to make sure this is a costed plan.

“As Conservatives we have to believe – I do, very firmly, believe – that growing the economy through pro-growth measures including tax cuts is the right thing to do.”

“So, if ever there was an example of a party that is absolutely lost the plot, lost any sense of purpose then it was that debate last night”.