What to watch in Ravens vs. Bengals, including the ‘Joe Burrow offense’ and third-down defense – Boston Herald 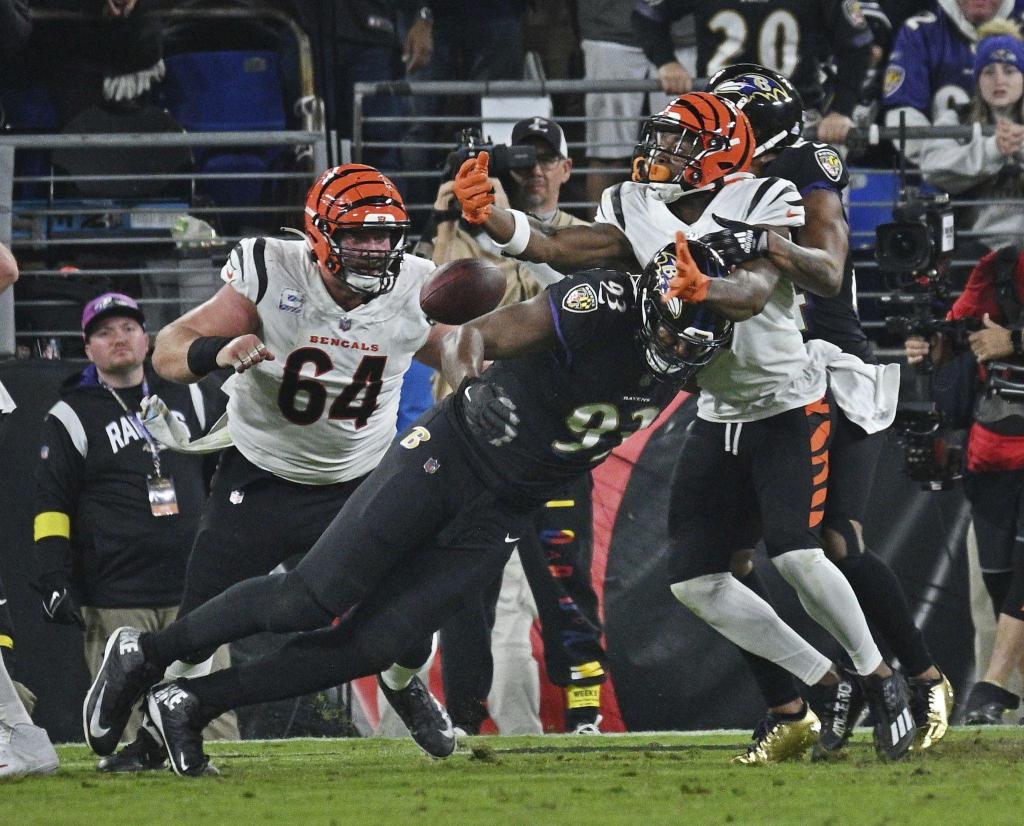 ESPN’s largest-ever “Monday Night Football” audience tuned in this past week as one of the most upsetting scenes in NFL history took place on live television.

During the Buffalo Bills’ game against the host Cincinnati Bengals, Bills safety Damar Hamlin collapsed on the field and received CPR for nearly nine agonizing minutes. An average of 23.8 million viewers — most of whom were already watching a top NFL matchup — held their breath as Hamlin was transported to the University of Cincinnati Medical Center. The game was suspended, a rare occurrence.

Since then, playoff possibilities and quarterback questions have swirled around the Ravens’ Week 18 matchup in Cincinnati, but Hamlin’s injury remains a backdrop as the Ravens visit the site of the incident.

Hamlin’s recovery has been closely monitored this week and it’s been largely encouraging news; the 24-year-old had his breathing tube removed Friday and spoke with teammates on FaceTime. Hamilton, the Ravens’ top pick in last year’s NFL draft, said the recent good news regarding Hamlin has made this week easier than it might have felt following Hamlin’s scary collapse.

“It’d be a lot tougher week if it went the opposite way, which I’m glad, and everybody is, that it didn’t,” he said.

Can the Ravens pass enough to open up the run?

The Ravens have a game to play — with playoff implications and, potentially, home-field advantage on the line.

They’re underdogs against the red-hot Bengals and will likely need to post a stronger offensive showing than they have in recent weeks if they have a chance to knock off the team with the longest win streak (seven wins, dating to October) in the AFC.

Ravens quarterback Tyler Huntley, who is expected to start in place of the injured Lamar Jackson, has averaged just 132 passing yards in his five games this season, but it might be hard for him to even match that production; he was limited in practice all week with shoulder and wrist injuries and was listed as questionable on Friday’s injury report.

If Huntley — or Anthony Brown, the undrafted rookie quarterback who will play if Huntley is unable to — can complete a few passes to prevent the Bengals from loading the box against the run, it could open up a Ravens’ offense that has struggled recently. Baltimore has not scored more than 17 points in a game since November.

Running back J.K. Dobbins has been strong, however, since his return in Week 14 from arthroscopic knee surgery. He’s totaled 397 yards over the past four weeks, the most in the NFL during that span.

“He should definitely play more,” Roman said of Edwards. “It just played out that way, but I thought J.K. was doing pretty good.”

The Ravens held the Bengals’ passing attack to 190 yards during Baltimore’s 19-17 win in Week 5 at M&T Bank Stadium, but for both teams, that feels like a long time ago.

Baltimore has trended down since then, while Cincinnati has trended up, and a big reason for that is the Bengals’ strong passing attack.

“We call it the Joe Burrow offense,” Harbaugh said of Cincinnati’s third-year quarterback. “The way they’ve built their West Coast offense is kind of toward Joe Burrow’s skill set, which is obviously really good.”

This season, the Bengals average 7.6 yards per passing attempt and 269 passing yards per game.

“They have probably some of the best offensive weapons in football,” Harbaugh said.

A dip on third down

The Bengals have a 47% third-down conversion rate this season, the fourth best mark in the NFL, while the Ravens rank fourth in third-down defense, allowing opponents to convert on just 35% of third downs.

However, over the past four weeks, Ravens opponents have converted 45% of third-down chances, including Pittsburgh’s 10-for-16 performance this past week.

The Ravens’ defense had trouble getting off the field, allowing Pittsburgh to run 20 more offensive plays.

Much of that came down to third-and-short. On the Steelers’ opening drive, they faced four third downs — none which were shorter than 2 yards.

“The first thing is staying out of third-and-short,” Macdonald said. “We had four third-and-ones that we lost all four [of]. We’d just like to improve in that situation, but that’s a tough situation [with] the way teams are approaching that situation now. So, I’d say, mostly, it’s a function of creating more opportunistic situations for us, and that’s how you play the first and second down before.”

Prince Harry’s Afghanistan revelation slammed: ‘How stupid can you be?’