Whatever happened to Venezuela’s opposition movement? 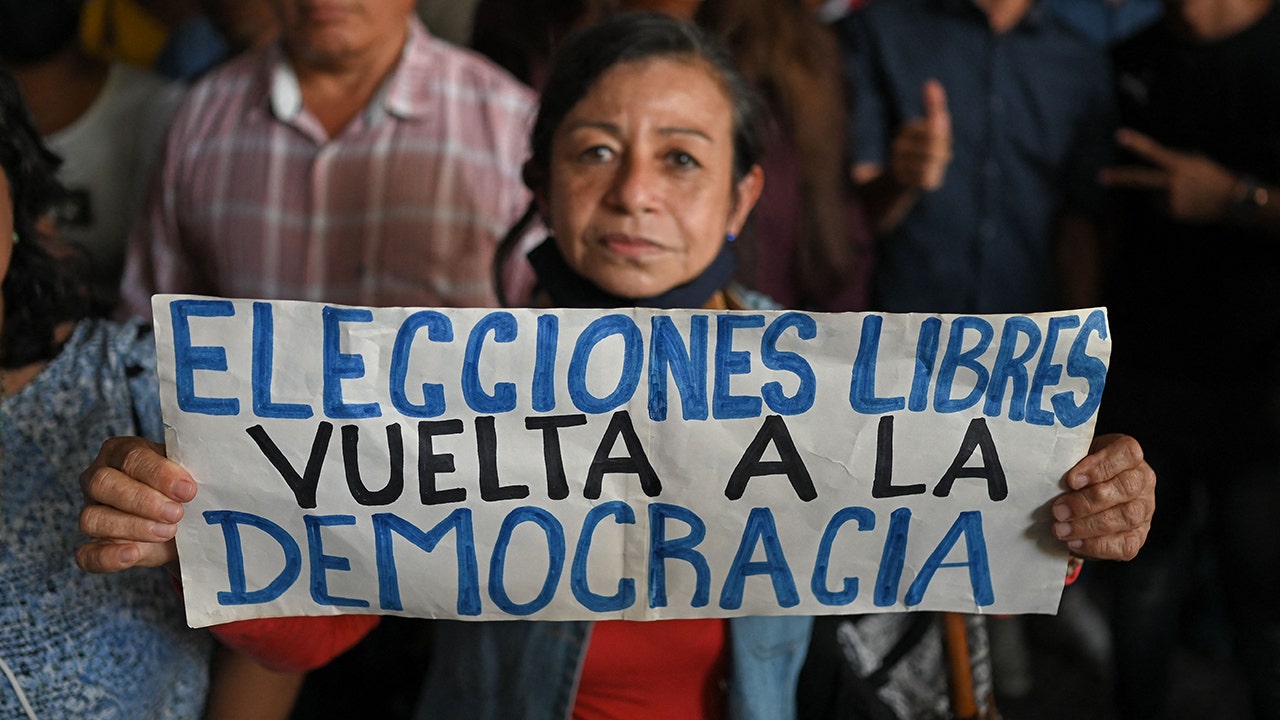 The crisis at the southern border is bringing renewed attention to the violence and poverty in Latin America, from which some migrants are trying to escape.

The Biden administration recently expanded an initiative to allow up to 30,000 individuals per month from four Latin American countries to receive work authorization in the United States. The countries are Venezuela, Nicaragua, Haiti and Cuba. The program expands on the parole process that was first in place for Venezuela, a country that has struggled to address corruption under a dictator who refuses to give up his power.

In 2019, a group of opposition lawmakers in Venezuela voted to stop recognizing President Nicolás Maduro as the country’s leader. They appointed Juan Guaidó as interim president. The United States was the first country to recognize Guaidó as Venezuela’s president, and more than 50 other nations quickly followed suit.

Elliott Abrams served as special representative for Venezuela during the Trump administration. He said he was hopeful in the early part of 2019 that the U.S. was going to be able to push Maduro out.

“I think what I at least underestimated was the difference between this regime and many other governments, non-democratic governments we’d worked with in Latin America,” said Abrams. “This isn’t a criminal regime. This is a criminal gang.”

Protests erupted with opposition supporters calling for Maduro to step down. They were met with often violent responses from the government’s military. Since then, demonstrations have dwindled, millions have left the country and Maduro remains in power.

The opposition was looking for a reset. On Jan. 5, they officially voted to oust Guaidó and replace him with new leadership. Guaidó appeared on CNN en Español and reacted to the decision by saying, “I respect the vision of the majorities, it does not mean that I accompany them.”

Former Venezuelan opposition leader Juan Guaidó speaks during an interview at his office in Caracas on Jan. 9, 2023.
(Federico Parra / AFP via Getty Images)

Dinorah Figuera was picked to serve as the new face of the movement, alongside vice president Marianela Fernández and second vice president Auristela Vásquez. All three women currently live in exile.

“We were not served by a scenario of the interim government. Now we are taking another path,” Figuera said in an interview with the Associated Press. “Sometimes changes are not well received by some people, who are either more radical or no longer believe in the opposition. But we have to do something to regain that trust.”

President of the opposition-controlled National Assembly of Venezuela Dinorah Figuera poses for a photo during an interview with the Associated Press in Valencia, southeast Spain, Jan. 12, 2023.
(AP Photo / Manu Fernandez)

Figuera left Venezuela for Spain in 2018 after the death of a close friend. She suspected Maduro’s government was involved and began receiving threats when she spoke about her concerns. The risk of returning to her home country may force her to try to appeal to supporters from more than 4,000 miles away.

“It’s a mistake,” said Abrams. “One of the great things about Guaidó was that this whole time he stayed in Caracas fighting the good fight and trying to do it now from Spain. … It’s not the same.”

Maduro’s government called for the three lawmakers to be arrested and accused them of treason, money laundering and impersonating public officials. They claim the group is living in a fantasy and causing undue suffering to the Venezuelan people by supporting U.S. sanctions.

“They lent themselves to build a farce of a parallel government with the sole objective of legitimizing the biggest robbery that has been done in this land since the Spanish conquest,” Maduro said in a speech to his congress.

On whether the U.S. had plans to negotiate an option to live in exile, Abrams noted, “We would have made a deal,” and he continued, “His view was and still is: If I leave power, I’m going to end up in jail.”

Former U.S. Special Representative for Venezuela Elliott Abrams speaks with reporters during a briefing at the State Department on June 25, 2019, in Washington, D.C.
(Alex Edelman / AFP via Getty Images)

“He’s protected by all his cronies who are taking money out of narco trafficking,” Duque said. “I think Juan Guaidó has been a strong voice. But he’s a guy who’s fighting the most criminal regime in the Western Hemisphere. For one man to defeat such a cronyism regime is very hard.”

He also called on countries to continue applying pressure.

“I am disappointed as a Latin American that we haven’t been able to make Maduro step out.”

Colombia recently elected a new leftist president in Gustavo Petro. New leaders like those in Colombia and Brazil have worked to reestablish relations with their Latin neighbor. Petro recently traveled to Caracas to meet with Maduro for discussions on trade, reopening bridges between the two countries, and a possible peace deal. Spain also appears to be easing its stance toward Venezuela and appointed a new ambassador. Madrid had vacated the post two years ago in protest over how elections were handled.

Venezuela’s embassy in the United States, which had been run by Guaidó’s government, announced in January it would cease operations. Its designated ambassador, Carlos Vecchio, stepped aside from his role. An employee there tells Fox News there is no timeline for resuming functions at the embassy.

“The National Assembly will designate a person of contact of the parliament in countries of interest, but they didn’t communicate anything about it,” said the employee.

Vecchio released a video statement in which he thanked Guaidó and embassy staff.

“Together we achieved the protection of Venezuela’s assets in the United States,” Vecchio said. “We control all diplomatic headquarters and buildings, destroyed by the dictatorship. We protected Citgo, gave it back its independence and productivity.”

Abrams was asked if he was caught by surprise following Guaidó being replaced and the eroding opposition.

“I’d seen it coming because the opposition was falling apart largely, I would argue, because of us,” Abrams said. “I think it was a big mistake because Guaidó, as you’re saying, was known all around the world, and dozens of countries viewed him as the legitimate interim president.”

President Joe Biden is facing criticism over actions taken to ease oil sanctions in Venezuela. Last November, the Treasury Department allowed Chevron to resume limited energy production in the country. The administration said the move was part of an effort to encourage political dialogue toward a presidential election. But some Republicans argue that easing oil sanctions only benefits Maduro.

Nicolás Maduro, Venezuela’s president, delivers his state of the union address at the National Assembly in Caracas on Jan. 12, 2023.
(Gaby Oraa / Bloomberg via Getty Images)

“It’s a complete failure. You’re not supporting freedom and democracy,” said House Foreign Affairs Chairman Michael McCaul, R-Texas. “Now we’re allowing them to produce more energy that will send more money into a dictatorship that’s funded by Russia, by Iran, by China. They are in this hemisphere right now. And so the actions of this administration have given a lifeblood to a dictator.”

Abrams called the end of Guaidó’s government a major disappointment.

“It’s certainly a major disappointment. We wanted to help Venezuela get back to democracy. We failed now under two presidents,” Abrams said. “I [talk] to the Venezuelan opposition people all the time. They just feel as if the administration has given up.”

The U.S. has continued to allocate millions in aid for humanitarian assistance and efforts to strengthen democracy. The amount has been steadily increasing under former President Donald Trump and now Biden. The current administration also reaffirmed its commitment to supporting Venezuela’s opposition, even without Guaidó as the face of the movement.

Supporters of Venezuelan opposition leader Juan Guaidó shout slogans during a demonstration to demand a date for presidential elections in Caracas on Oct. 27, 2022.
(Federico Parra / AFP via Getty Images)

“We continue to recognize what is the only remaining democratically elected institution in Venezuela,” State Department spokesman Ned Price said. “We respect and will respect the decisions that the 2015 National Assembly makes.”

The opposition party plans to hold primaries sometime this year, and Guaidó is expected to be involved. The winner would face Maduro in 2024. However, experts believe Maduro could move up the general election to this year in an effort to catch the opposition off guard and create further disarray.

Abrams said any chance for the opposition to take out Maduro the diplomatic way appears unlikely.

“Maduro could never win a free election and is not going to have a free election for that reason. So, my problem is that I just don’t see Maduro walking away from power again because of fear of going to jail. Nobody knows the crimes he’s committed better than he does.”

Bret Baier is the Chief Political Anchor of Fox News Channel, and the Anchor and Executive Editor of “Special Report with Bret Baier.” He is the author of four presidential biographies, which tackle the critical issues of our times. His fifth biography, To Rescue the Constitution:George Washington and the Convention that Saved the American Experiment, will be published in 2023.

Thousands of nurses go on strike across England