White House says Biden is ‘surging’ resources to help migrants at border. Is it enough? 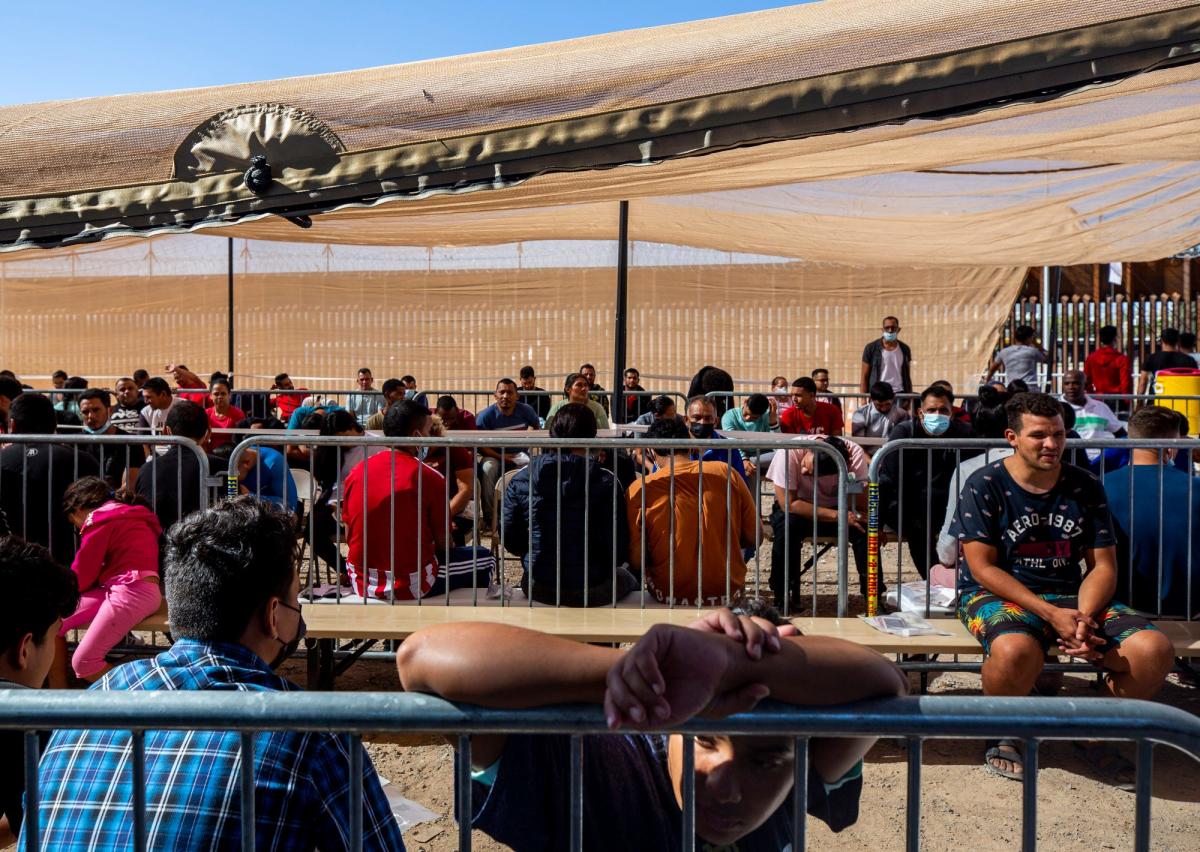 EL PASO, Texas – So many migrants are arriving day and night that Border Patrol agents set up a waiting area at the border wall with benches, portable bathrooms and snacks, including Johan Franco, a 32-year-old who says he fled Venezuela three months ago.

He had worked as a carpenter before the economy plunged so deep and inflation rose so high, that he could no longer afford to eat.

In El Paso, he was greeted with minifridges that kept sandwiches cold; there were palettes of bottled water and shelves of baby bottles in plastic boxes.

Border agents in El Paso appeared to be shifting resources already in hand – food and gear from a processing center – to the borderline to stave off yet another humanitarian crisis, which comes at a critical point for the Biden White House weeks away from the midterms. Sector Chief Gloria Chavez said the sector is also flying as many as 500 migrants per day to sister sectors along the border, where agents are less overwhelmed.

The Biden administration says it is surging resources to areas near the border, although it has not provided specific details about what those efforts entail. Neither the Department of Homeland Security nor the White House provided information on actions the administration may be taking to tackle crowding of the El Paso area and care for and process migrants in response to repeated requests for comment from USA TODAY.

The swell of migrants, desperate to escape economic and political hardship in Venezuela, Cuba and Nicaragua on the heels of the COVID-19 pandemic, has stimulated new diplomatic and political challenges for President Joe Biden – in addition to those he already faced with Mexico and Central American presidents he leaned on for help on staving the flow of migrants to the U.S.

“This is a totally different circumstance,” Biden said Tuesday. “What’s on my watch now is Venezuela, Cuba, and Nicaragua. And the ability to send them back to those states is not rational,” Biden added. “We’re working with Mexico and other countries to see if we can stop the flow. But that’s the difference.”

But new questions about Biden’s ability to depend on Mexico and the northern triangle countries of Guatemala, Honduras and El Salvador have already created challenges for the Biden administration as the governments of its “reliable partners” in the region grow increasingly autocratic; cracking down on civil society, attempting to jail opponents and seeking reelection when forbidden by that country’s constitution.

Record migrant arrivals: Cubans, Haitians are fleeing to US in historic numbers. These crises are fueling migration.

The Biden administration will have to take a much stronger stand against the steady erosion of democracy in Latin America if it wants to curb migration, said Anita Issacs, an expert in U.S.-Latin American relations and a professor at Haverford College.

To boot, the U.S. cut ties with Venezuela’s Nicolás Maduro in 2019; its diplomatic relationships with Cuba and Nicaragua are tenuous and deeply fraught.

The White House insists its diplomatic efforts are the way forward.

“What you will see in the coming weeks is an enormous amount of intensive diplomacy as we work with all of the countries of the region to do their part to help deal with the migration issues coming out of Cuba or Nicaragua and Venezuela in particular,” White House National Security Advisor Jake Sullivan said but gave no further details about these efforts.

The diplomacy taking place behind the scenes has seemingly had the purpose of being able to subject a greater proportion of the people that are encountered at the southern border to expulsion, said Jorge Loweree, managing director of programs and strategy at the American Immigration Council, a nonprofit legal and policy group based in Washington, D.C.

But even then, some aren’t budging.

“Mexico has not been willing to accept these populations, certainly not in large numbers,” he said.

What resources are they sending to border cities?

As a result, border cities are struggling to shelter unusually large numbers of asylum seekers.

Border cities like El Paso are accustomed to witnessing rapid shifts in migration flows. But the pace of the increase in arrivals of people from Venezuela, Cuba and Nicaragua put enormous pressure on the systems in place to welcome them.

Border Patrol’s Central Processing Center in El Paso, with an annex, has the capacity to hold fewer than 2,000 people at a time. With a daily average of more than 1,500 people arriving in September, Border Patrol began dropping migrants off at bus stations and on street corners downtown.

The city stepped in. El Paso officials say the city has spent more than $1 million since July to help keep migrants off the street and was struggling to get federal reimbursement.

After weeks of negotiations brokered by U.S. Rep. Veronica Escobar, D-El Paso, the Federal Emergency Management Agency agreed on Wednesday to provide the city of El Paso with $2 million in advance funding and promised to have nearly $500,000 in first and second quarter expenses deposited in the city’s account by Friday, according to El Paso Mayor Oscar Leeser.

“We’ve been working with the White House to get paid on some of the accounts,” Leeser said. “It’s a situation we have to adapt to on a daily and hourly basis.”

The city recently set up a transportation hub set up to help low-resource migrants travel to their destinations of choice. El Paso city officials are coordinating directly with mayors’ offices, including with Mayor Eric Adams’ administration in New York, so that destination cities aren’t taken by surprise.

Florida’s response: Gov. DeSantis threatened to send migrants to Biden’s Delaware home. It was a no-show.

Lawmakers: Rep. Henry Cuellar calls for more resources for migrants: ‘We need solutions and not theater’

Leeser said the city, El Paso County, the congresswoman, Border Patrol’s Chief Chavez and others are “all working toward the same common goal: to treat people the way we would want to be treated.”

Even with the larger number of migrants coming, Chavez said El Paso is better prepared than it was in 2019 when Central American families were arriving by the thousands and unaccompanied minors were being held in dangerous and unsanitary conditions in border holding cells.

Today, the sector’s Central Processing Center provides a safe space for processing families, she said, including medical aid, hot meals, water and a space for children to play or watch TV.

Border Patrol now has civilian employees dedicated to processing and attending to migrants at the facility, allowing more agents to return to enforcement duties. The data entry is also automated now so that when a migrant has received a background check and is flagged for detention or is cleared to be released to seek asylum or other relief, the information is immediately shared with Immigration and Customs Enforcement.

“We prepared for this early on in fiscal year 22, when we stood up the overflow area knowing we would experience an uptick in migration in the near future,” she said. “We always have to be one step ahead.”

Biden delegated oversight of U.S. efforts to combat the root causes of migration fromHonduras, El Salvador and Guatemala to Vice President Kamala Harris early on in his presidency. U.S. policy under their leadership has largely focused on trying to stem the flow of migrants by attempting to combat poverty and violence with economic investment.

The Biden administration’s “root causes” approach is a long-term one and hasn’t fully delivered on its promises, analysts say.

In addition to diplomacy, the vice president has worked to recruit more than $3.2 billion in corporate investment by U.S. companies to Central American economies. But the effort hasn’t ended the flow of migrants.

The number of Guatemalan and Honduran migrants has been declining, with monthly encounters down every month since February as inflation has soared in the U.S. and Border Patrol relies on Title 42 expulsions. Migration from El Salvador has stayed at levels similar to a year ago.

Migration from Venezuela, Cuba and Nicaragua – three countries where the U.S. has limited influence – has risen sharply in the meantime.

“Hopefully, there is some sort of increase in support, to provide assistance to people who are on the move,” said Immigration Hub executive director Sergio Gonzales.

Immigration experts say that shifting migration patterns and the worsening situation at the border require new strategies, a more efficient asylum system, increased federal funding, additional facilities, a higher number of immigration judges, expanded pre-screening of migrants and a better case management system that ensures refugee applicants who are already in the country comply with their appointments.

“Put some energy into it in the same way that the administration put energy into reaching some really pretty landmark legislation during the first two years,” Issacs said. “They haven’t wanted to deal with it. It’s been a hot potato.”

An overhaul of the legal migration system of that magnitude would take a bipartisan push that has often been discussed – but never materialized – in the wake of headline-grabbing immigration flows and tragedies like the deaths of 53 migrants in San Antonio in June.

“Everyone who comes in applies for asylum now,” said Roberta Jacobson, a former U.S. ambassador to Mexico who served as Biden’s coordinator for the southwest border on the National Security Council early in the administration.

The vast majority of migrants arriving at the southern border will not qualify for asylum, she said. “Our asylum processes are so overstressed by this, that they have collapsed.”

The United Nations has called the Venezuelan migration one of the largest displacement crises in the world. South American countries have taken in millions of Venezuelans, with neighboring  Colombia accepting some 1.8 million Venezuelans and Peru hosting another 1.3 million, according to the UN Refugee Agency.

Difficult relations with authoritarian regimes in the arriving migrants’ home countries have complicated efforts by the Biden administration to quickly expel migrants from the U.S. who may not qualify for asylum and arrived after the cutoff date for temporary protected status.

Back in El Paso, at the orders of border agents in the waiting area, Franco tossed all his belongings in a trash can except for a cellphone and the little cash he had left.

He remembered a country that was once a land of opportunity for migrants from around the world.

“Venezuela was the Dubai of South America!” he said.

Now the tables have turned.

“You can’t imagine the number of people who are on their way here,” he said.

This article originally appeared on USA TODAY: Surge of migrants from Venezuela at border pose challenge for Biden

Kellyanne Conway says Trump “wants his old job back,” and would like to…