Why a California Central Coast city loves the Dallas Cowboys 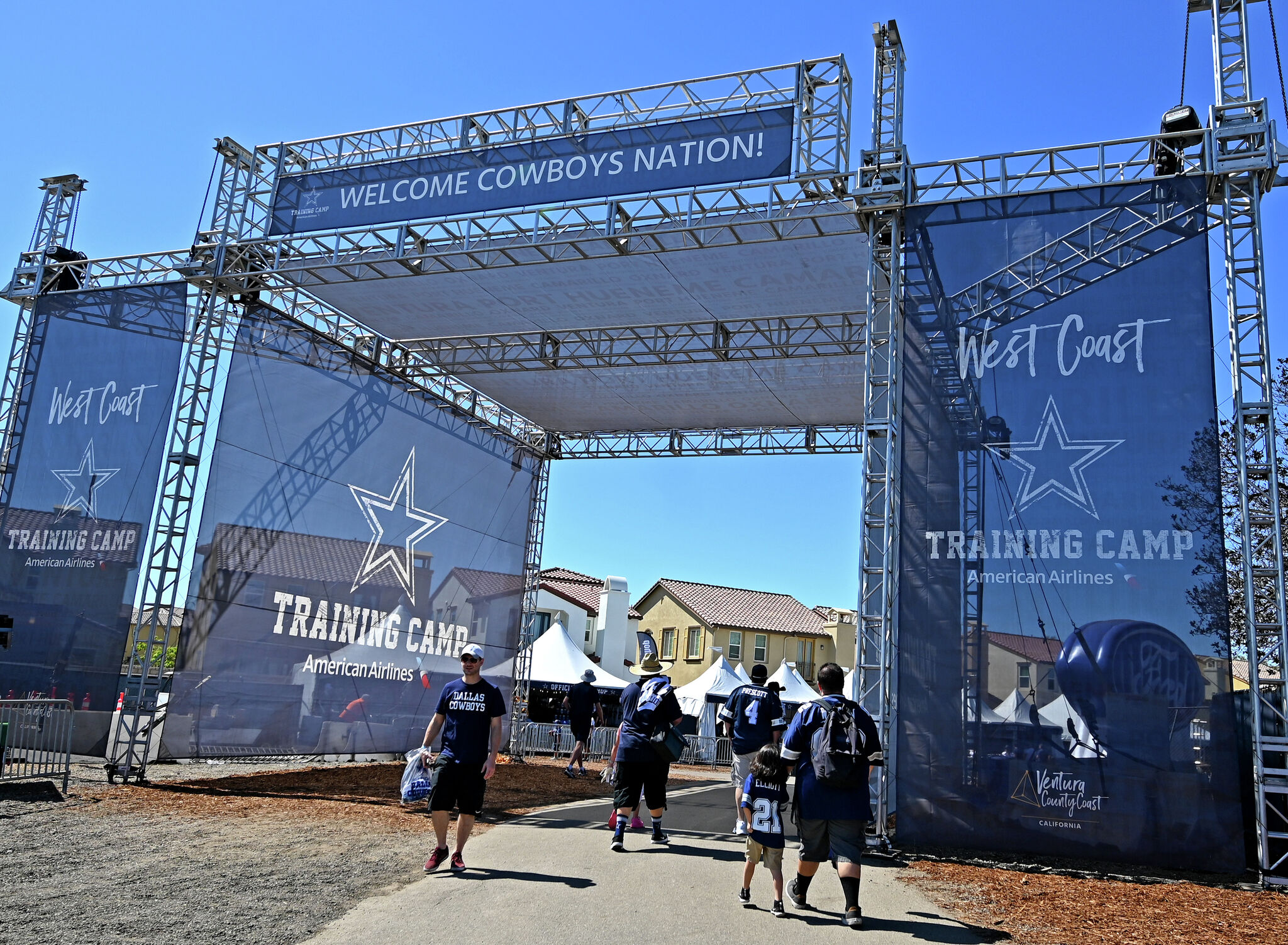 Over the past six decades, California has become an increasingly blue state — Dallas Cowboys blue, that is.

The professional football franchise that self-identifies as “America’s Team” has really come to prominence here, starting in 2001, when it kicked off a two-decade, on-and-off affair with a Central Coast oceanfront city. Now 16 seasons strong, that relationship enables the Dallas Cowboys to lay claim to a fervent and loyal fandom unlike anything outside of North Texas.

What’s in name, a region? Everything, if you’re the Cowboys.

The town identifies as both a Southern California destination and as one of the southernmost points of California’s Central Coast.

“Because we have the PCH and 101 freeways overlapping, we’re where the Central Coast begins in terms of road trips,” Visit Oxnard’s vice president of marketing and communication Brittney Hendricks told SFGATE. “If you look at the Central Coast tourism council map, there are cities as far south as Simi Valley that are Central Coast. But yes, we also identify with Southern California.”

Perhaps the discussion of what region Oxnard actually occupies is only semantics but — at least as far as the NFL is concerned — it’s also an important tool for those who observe and collect data on how fandoms move, showcasing how the Cowboys have risen to prominence here in recent decades.

Even as other NFL franchises in California have relocated inside the state, moved completely out of it or, in one case, left and come back — the Cowboys keep returning to Oxnard.

That the Cowboys’ presence is in the exact spot that draws from both the LA Basin and acts as a gateway to the rest of the state is not by accident.

Team owner Jerry Jones is perhaps the most recognizable of all the current NFL oligarchs and the one credited with modernizing the NFL marketing machine. Jones has been one of the most controversial owners in the league, drawing criticism for saying he would bench any player who knelt during the national anthem, among a litany of other scandals in the 33 years since he bought the team.

He was also born in Los Angeles and regularly claims California, when it suits him.

“We recognized how many Cowboys fans we had out here and wanted to continue to have more and to be sensitive to our fans out here,” Jones told the Ventura County Star in August 2006. “That’s one of the big reasons we are here. I enjoy California. I am from California.”

Raised mostly in Arkansas, Jones only spent his first three years in LA. He was the heir to an insurance fortune, but early on, he struck out on his own by opening a slew of Sacramento-based Shakey’s Pizza parlors in Missouri.

The pizza joints didn’t take off in the southeast, so Jones ended up taking a job at his father’s insurance company and failing at several other side ventures, including a thwarted attempt to buy the then-AFL football franchise San Diego Chargers in 1967, reportedly using mob money. Eventually, he succeeded at petroleum and gas exploration back in Arkansas.

He realized his ambitions in 1989, when he purchased the Cowboys for $140 million. Soon after, he made waves in North Dallas by firing Tom Landry, the Cowboys’ first head coach, and set about the task of creating America’s NFL juggernaut.

“Training camp can be a great marketing tool,” former Minnesota Vikings owner Red McCombs told the Ventura County Star on Aug. 20, 2006. “… And Jerry Jones is the best at marketing in the NFL right now.”

Raiders vacate Oxnard, setting the stage for the Cowboys

During the Landry era, the Cowboys routinely ventured west to the cooler climes of Thousand Oaks for training camp, but Jones was looking for even more climate-friendly coastal confines. Fortunately for him, he found an opening after Al Davis and the Raiders decamped from the team’s offseason Oxnard headquarters — one that was built specifically for the franchise in the mid-’80s.

In 2001, Jones took advantage of the vacancy at River Ridge Playing Fields and the adjacent Marriott Residence Inn Oxnard River Ridge, an all-suite hotel and conference space built specifically with visitors to the fields in mind.

Since then, it’s Oxnard that’s seen most of the action for the Cowboys’ preseason, even as Jones and his revolving door of Cowboy head coaches flirted with training camp stops in San Antonio and Wichita Falls.

While the Raiders’ Davis enshrouded the team’s practice field with giant swaths of black plastic for secrecy, Jones wanted to make the Cowboys’ preseason experience as big and accessible as the team’s outsized reputation.

The Cowboys in Oxnard installed bleachers and gave fans the kind of player access for meet-and-greets and autographs that only the media previously enjoyed. The field itself is buffeted with Cowboys-centric exhibits and games and, with the exception of a small fee for parking, it’s free.

“It’s a really big deal for Oxnard,” Hendricks says. “It of course puts us in a position for a lot of notoriety. We’ve been the West Coast home for 16 training camps since 2001. We recognize they are ‘America’s Team.’ They’re a global brand. We love having them, it brings us a lot of visitation. It puts us on the map not only nationally, but globally.”

‘We can focus on the Cowboys’

On the eve of the training camp’s July 27 start, things are moving at warp speed for Millicent Bennett, the general manager of the Marriott property adjacent to the Cowboys’ practice facility.

“It’s a complete buyout from the team this year,” she told SFGATE, noting that this is the first year, since the pandemic began, that fans will have unfettered access to the players. “It’s all Dallas, all the time … back to a more traditional training camp.“

Bennett said that in the weeks prior to the camp’s opening, she and the staff remain in “24/7 ramp-up mode” for the Cowboys’ players, coaches and staff. They will call the property home for the next three weeks: every meal, every meeting — every missed tackle, pulled hamstring and round of cuts — is about to go down in Oxnard.

“It’s a unique situation,” she says. “There’s a benefit in that we can focus on the Cowboys, but it’s such a big operation and a big event for us. We host many corporate events and social events, but making sure everything goes smoothly here and now is really the highlight of our year. From our kitchen crews and their nutritionists, to their front office staff and our executive team — we work well together and give them what they need to perform well.”

‘They do hold a very special place in my heart’

Throughout the years, Oxnard’s residents and the region have adopted the Cowboys.

At times, that can mean literally taking players into their homes. In 2004, defensive tackle Jermaine Brooks ate enchiladas and chile con carne at the home of Oxnard resident Anthony Quezada, who was a volunteer at the Cowboys training camp.

“He likes Mexican food. My wife (Patty) made enchiladas one night,” Quezada told the Simi Valley Star on Aug. 21, 2004. “He said another of his favorites is menudo. Believe it or not, he likes menudo.”

“I may retire here,” linebacker Keith Brooking told the Lompoc Record on Aug. 14, 2001, just one day after arriving in Oxnard. “This is unbelievable.”

Oxnard resident and Cowboys superfan Jose Espinoza sports a tattoo with a team logo and likenesses of Cowboys greats Tom Landry, Emmitt Smith, Michael Irvin, Troy Aikman and a cheerleader across his back. Before a January 2019 divisional round playoff game against the LA Rams, he told USA Today that his loyalty lies exclusively with his adopted team from Texas.

“For us to have a professional team protecting us in our backyard, it’s an amazing feeling,” Espinoza said. “It gives us something to look forward to every summer, and we want to support them (year-round.)”

Indeed, whenever the Cowboys play here in the regular season or playoffs, their West Coast-grown fans are sure to follow.

Despite the well-known rivalry between California and Texas, the Golden State’s Cowboys fans will defend their own against other teams, even those from other parts of the state. That support helped erase the Rams’ home-field advantage at the LA Coliseum for the 2019 divisional playoff game. It’s also erupted into violence, like when Cowboy fans engaged in fisticuffs with 49ers fans in January’s divisional playoff game in Santa Clara.

The heart of California, it seems, beats for the ‘Boys.

“That’s what we are here to take advantage of,” owner Jones told the Santa Maria Times on Aug. 16, 2000. “It’s really unique and special for the Cowboys to have such a fan base like we do out here in California”

And even when things are at their most hectic, Oxnard Marriott general manager Bennett says her Cowboys fandom never wavers. “I’ve been at this property for 17 years in one role or another,” she concludes. “It’s busy — but it’s a great time of year. They do hold a very special place in my heart.”

‘I told the players it was a lack of belief’…