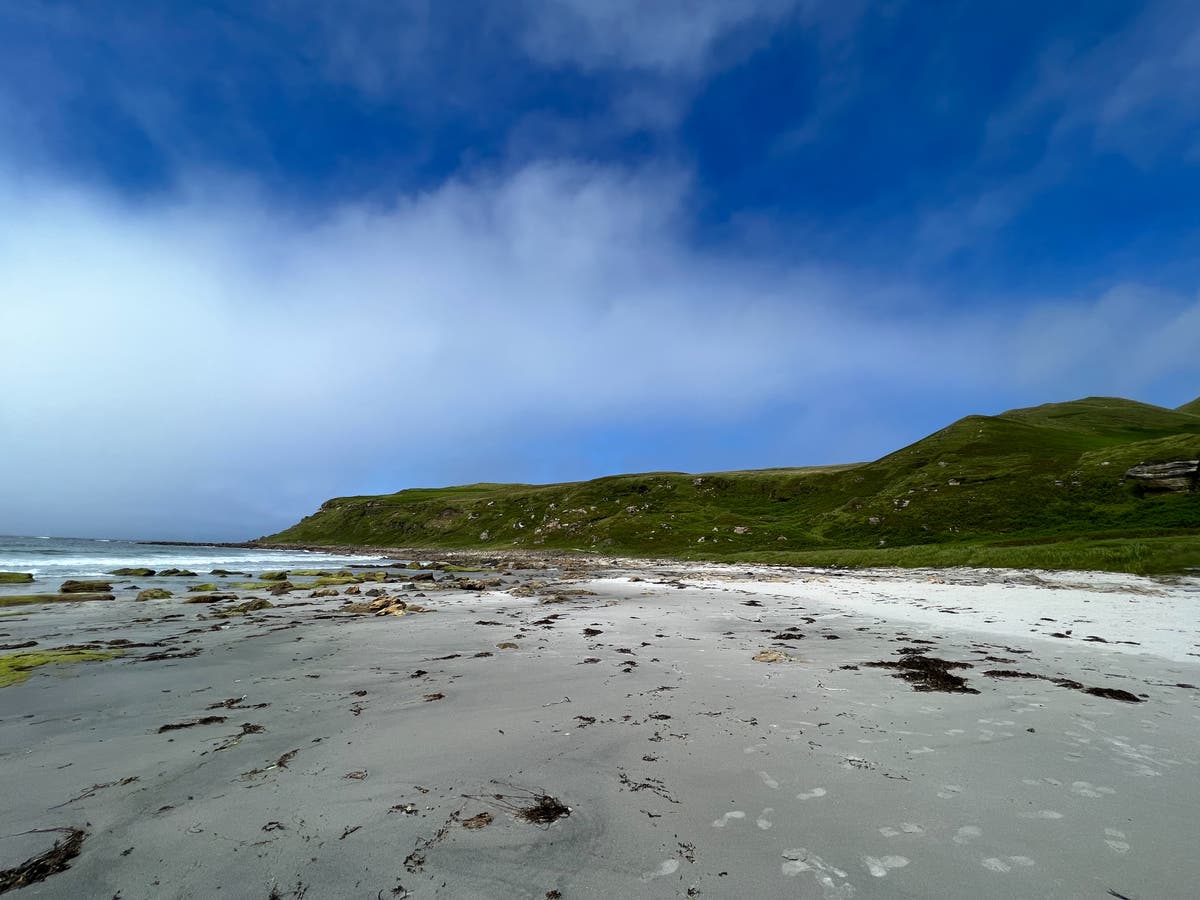 “Everything good that has happened on Eigg since the community buyout has happened because of it,” says Stuart Paul McCarthy of Eigg Brewery, as he proudly shares Scotland’s first co-operative brewery.

“Everything good” includes becoming the world’s first green electricity self-sufficient island, and this year’s new An Laimhrig community hub. Welcome to the UK’s greenest isle, where they’re now welcoming visitors as “temporary residents”, rather than tourists.

Eigg’s renaissance over the last quarter of a century since the buyout belies a past blighted by tragedy and hardship. This wildscape of vaulting pitchstone lava mountain, sweeping Atlantic beach and savage coast is haunted by the baleful days of internecine clan warfare – in the ‘Massacre Cave’ alone 400 souls perished – and the disastrous 19th century Highland Clearances, when whole communities like Grulin were wiped off the map.

Had it not been for the community buyout in 1997, Eigg may just be bumbling along like many of the Hebrides, ruled by a succession of – at best – questionable landlords. Instead, under the stewardship of the Isle of Eigg Heritage Trust – and their subsidiaries Eigg Trading, Eigg Electric and Eigg Construction – the population is on the rise (solidly above 100), as people from all over the UK and further afield are drawn to Eigg’s community-driven way of life.

This inclusive spirit extends to visitors. “We don’t see visitors to our island as just tourists,” says Lucy Conway as we tuck into local mussels in the Galmisdale Bay Café in the new community hub of An Laimhrig. “It’s more about being a ‘temporary local’, helping put money directly into the community, with respect both ways.” Conway is a director of the new SCOTO (scoto.co.uk) initiative that aims to not just forge links between Scotland’s communities, but also “show how community owned and managed tourism facilities can work alongside family businesses, sole traders, and larger businesses.”

An Laimhrig is a shining example. Working with visionary architects and island veterans WT Architecture – whose mantra is ‘Architecture. Place. People’ – they’ve created a clean, green hub. Think light and space, sparkling ocean reflecting through floor-to ceiling-windows; local wood abounds. The new Taigh Nighe wash house sports 100 per cent green electricity showers (£2 contactless), as well as information on water use on the walls. The only shop is community-owned, the Galmisdale Bay Café leased from the community and new community spaces will soon be completed and open to all.

I’m staying overlooking An Laimhrig in the Eigg Camping Pods, where I pay straight into the community. I’ve got that 100 per cent green electricity – Eigg is not connected to the National Grid – and my heating only comes on when it’s dreich. I burn local wood over the campfire and cook wild venison from another community-owned oasis, Knoydart across the water – and all washed down with an Eigg beer, of course.

The next day I meet Owain Wyn-Jones of Eigg Adventures, which is moving into new premises in An Laimhrig. He is ensuring the local wind, hydro and solar power is put to good use: “This year we’ve got the first 100 per cent green electricity e-bikes on any island in the world. You can explore our world and leave just your bike trails.”

And what a world it is: I ease off across the island, which packs a lot into a mere 9km by 5km, stopping at a vaulting standing stone and what Google reckons is a shop, but turns out to be a charmingly old school unmanned museum. Patches of forest weave across either flank as the papier-mâché peaks of the neighbouring island of Rum provide an implausibly cinematic backdrop. It’s postcard-pretty Scotland and I’m alone, bar a sea eagle soaring high above.

Descending into Cleadale, a sprinkling of houses emerges to savour the view of Rum and the wide sands of Laig Bay. Charlie – the local first-name-terms taxi driver and tour guide – lives in one cottage. He furnishes me with a dram, while his felt-artist wife, Libby Galli, is on hand with homebaked cakes. “We’re a friendly bunch on Eigg and creative too,” he says.

Charlie’s not wrong – the island is sprinkled with creatives, including Johnny Lynch, aka The Pictish Trail. He moved to Eigg and set up Lost Map Records and now also stages the annual Howlin’ Fling music festival here. Lynch tells me, “we love having people over. It brings us out of ourselves. We like showing the place off, and celebrating our lives here.”

It’s clear that three days isn’t enough time on Eigg. I do make it to the famous Singing Sands (spoiler – they more squeak than sing) and vault up the 393m peak of An Sgurr, with the sort of views of the Hebrides that will sing in your heart long after you sail away. I also ramble to the old Clearances settlement of Grulin, but don’t “wild” swim (it’s just “swim” on Eigg), nor heft out to remote Beinn Tighe, or nip over to any of the other trio of Small Isles (Rum, Muck and Canna).

My last stop is back at the Eigg Brewery, which stakes a claim to being Scotland’s greenest brewery. “We, of course, use Eigg water (we don’t harden or soften it) and green electricity, but beyond that we’ve worked out energy saving processes and when we do burn wood it’s using local forestry,” stresses Stuart Paul McCarthy.

With creative talents like McCarthy on an island being steered by the community, Eigg’s future looks bright. “When people come as temporary locals, we’d like to think they leave wondering about different ways of running their own lives, their own communities,” he says, as we raise a toast to an isle whose future is not just bright – it’s beamingly green too.

Catch the Caledonian Sleeper to Fort William from London Euston and various other stations heading north; take a Scotrail train from Fort William to Arisaig; and hop on the Arisaig Marine ferry from Arisaig to Eigg.

The Eigg Camping Pods cost from £45 a night, room only.