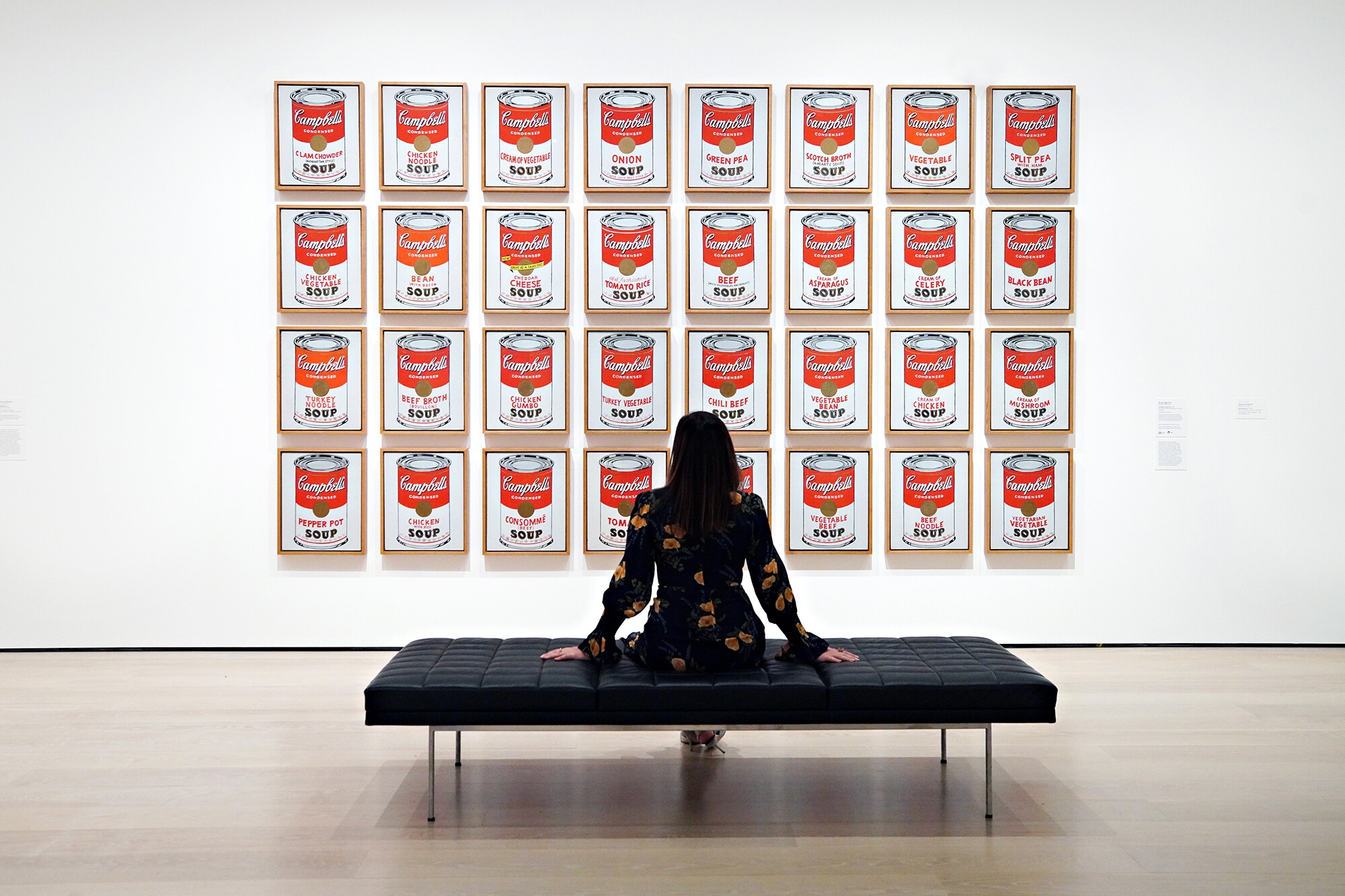 It started with immense skepticism, but Campbell Soup eventually grew to embrace Andy Warhol’s artwork and sponsored a Warhol exhibition at the Metropolitan Museum of Art.

Sixty years ago today, the pop artist Andy Warhol unveiled a wall of 32 Campbell Soup can paintings at a Los Angeles gallery, one for each flavor of soup then in production.

Not long after, the company sent over a lawyer.

Thus began a decades-long hate-love relationship between the artist and company. It started with immense skepticism, but Campbell eventually grew to embrace the artwork and even sponsored a Warhol exhibition at the Metropolitan Museum of Art.

When the Campbell brand was featured in Warhol’s artwork back in 1962, then President and CEO, William Beverly Murphy, “indicated that he had some initial concern” about use of the company’s trademarks, according to the company, prompting the lawyer visit to Ferus Gallery.

A cease-and-desist order was considered. But in July of 1962, John T. Dorrance, Jr., the son of the inventor of condensed soup, had just taken over as chairman. He was a passionate art collector and well-established in the art world. As criticism of the show mounted — “Is this art?” — so did publicity. For whatever reasons, the company passed on legal action.

Also, the gallery show was doing badly, with only five of the works selling for about $100 apiece, although one went to Hollywood star Dennis Hopper.

Warhol, born in 1928 in Pittsburgh, the son of Slovakian immigrants, was still better known as a commercial illustrator for shoe brands and department stores than as a fine artist. The gallery dealer Irving Blum decided the paintings might be worth more as a group someday and bought them all back. It would prove to be prescient.

Meanwhile, Warhol’s next series was of celebrities and, with Elvis and Marilyn replacing Onion and Tomato, that show sold out.

Consumers send in their labels for a Warhol

By 1964, it was Campbell that reached out to the artist.

According to a letter in its archives, a product marketing manager wrote to Warhol: “Your work has evoked a great deal of interest here at Campbell soup company.” A few cases of tomato soup, supposedly the artist’s favorite, were sent to his home in New York City in thanks.

The manager even hinted obliquely for a trade: “I had hoped to be able to acquire one of your Campbell soup can label paintings — but I am afraid you have gotten much too expensive for me,” he wrote. There is no documentation of him getting free soup can art as a result. But Beth Jolly, Campbell’s vice president of communications for meals & beverages, noted the company did end up commissioning one for a retiring board member the same year.

By 1966, the partnership became official. Campbell invited consumers to send in a couple of can labels and $1.00 in exchange for a Warhol designed dress made of paper. The promotion was a hit. The dress is now selling for about $20,000 at art galleries and online and is in the collection of the Metropolitan Museum of Art Costume Institute.

But Campbell still wasn’t quite buying that paintings of its cans were art.

In 1970, when Sotheby’s auction house had its first-ever sale of contemporary art, it featured a Warhol “Can with Peeling Label” with a suggested starting bid of $20,000.

The auction house reached out to Campbell and the Dorrance family to see if they were interested in buying but “I was told they showed no interest,” says David Nash who worked on that early sale and eventually became head of impressionist and modern art at the auctioneer.

(Ironically, Nash went on to do much business with the family: in 1989, he oversaw John T. Dorrance, Jr.’s, estate sale of fine art and furniture. Chock full of Picassos and Matisses, but still no Warhols, it raised $124 million and broke the then-record for a collection.)

Meanwhile, Warhol proved very brand loyal — he did not stray to Lipton, although he did do some Coca-Cola bottle art — and Campbell soup cans and boxes made regular appearances in his productions and in his interviews and MTV show of the 1980s.

Warhol died unexpectedly, in 1987, at the age of 58. His fame only increased.

It helped the soup artworks’ value that it became a hugely popular print series, and that it had two warring interpretations by critics.

Some argued the work was an acrid but intelligent criticism of mass-production, even of capitalism, while others saw a more comforting wall of soup, more about America and post-war options and prosperity.

In 1996, Blum sold the original set of 32 can paintings to the Museum of Modern Art in New York in a partial sale/gift valued at $15 million. (The auction record for any Warhol is $195 million, set earlier this year for “Shot Sage Blue Marilyn.”)

In 2012, the soup company issued a promotional “limited-edition” series of soup cans with Warhol’s interpretation of the company’s labels in various colors. It also served as the education and events sponsor for the Met Museum’s “Regarding Warhol: Sixty Artists, Fifty Years” exhibition.

Today, the company has a soup can painting hanging in its Camden, New Jersey, headquarters, said Jolly, and continues to work with the Andy Warhol Foundation for the Visual Arts in charitable ventures and most recently on licensed hoodies and other apparel.

But the Warhol estate has not escaped all trademark battles.

The Supreme Court in May said it would take up a case concerning whether the late painter infringed on a photographer’s copyright when he created a series of silkscreens of the musician Prince. They used an image by photographer Lynn Goldsmith as source material.

And while the Warhol foundation has argued, almost always successfully in lower courts, that Warhol’s use of work is “transformative,” the case has big implications for artists who draw inspiration, or appropriate, from pre-existing images.