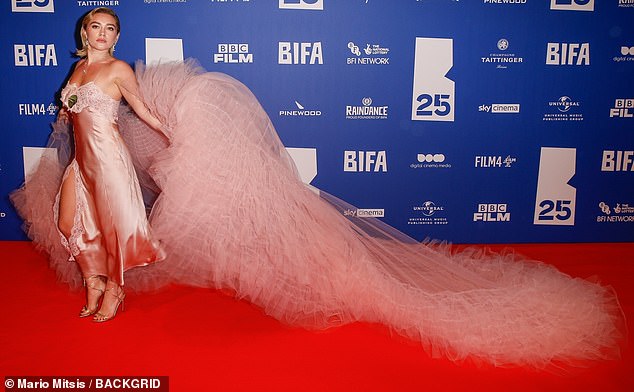 Metres of tulle. Oodles of silk, sparkles, feathers and frills. Even wings that made her look like an exquisite bird of prey. This year Florence Pugh has electrified red carpets across the world with her sheer magnetic chutzpah. And, amid a sea of conformist, cautious, politically correct, eco-conscious outfits, worn by unsmiling glamazons, that makes her my style icon of 2022.

From premieres to parties, 26-year-old Florence dominated every event she attended, every outfit a sensation. Take the British Fashion Awards earlier this month, where she stunned in a sweeping red Valentino satin dress with a low back that deliberately revealed the perfect hint of side boob.

Or the black Carolina Herrera punk princess dress with giant pink bow and train she wore to the Baftas in March. The sparkly, puff-sleeved Valentino dress with feathered shoes to the Venice Film Festival in September. Her breathtaking ballerina-esque Rodarte pink slip with tulle cape at the British Independent Film Awards. Or, well . . . I could go on and on. 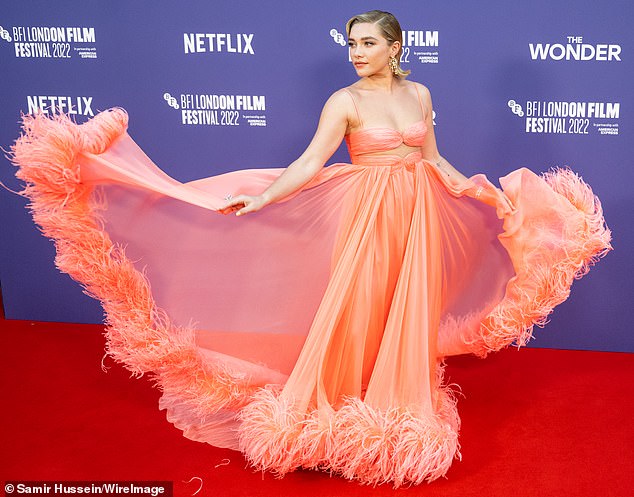 Fabulous in feathers: The star floated onto the red carpet at the BFI Film Festival in October in a semi-sheer coral Valentino Couture gown 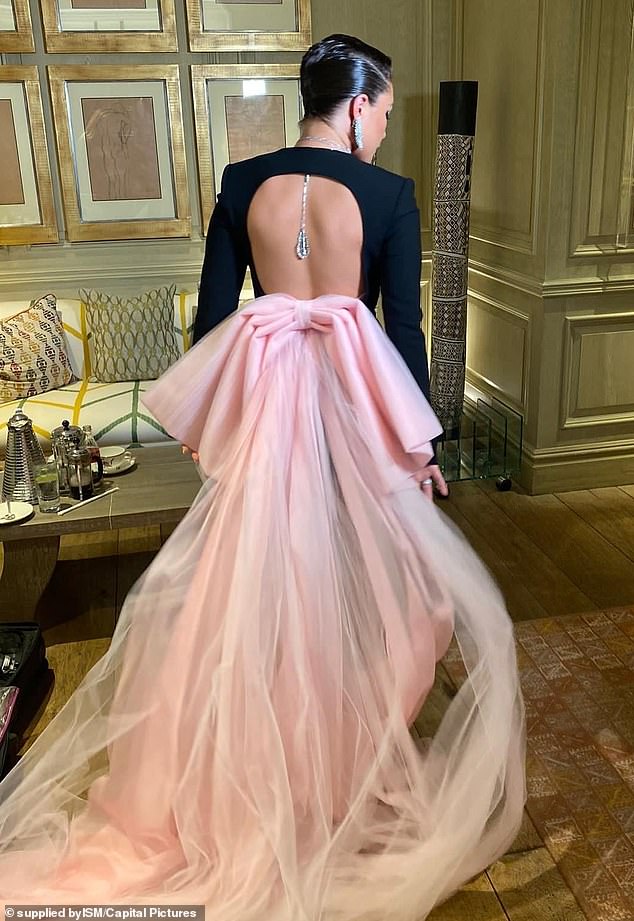 Taking a bow: She wore a black Carolina Herrera punk princess dress with giant pink bow and train to the Baftas in March

Florence is a supernova acting talent, arguably one of the best of her generation, delivering a succession of incredible performances in films including The Wonder and Little Women. But when it comes to fashion she’s never predictable, and she never plays it safe. Yet she knows only too well the kind of backlash she’ll face if she’s deemed to have crossed a sartorial line, to have worn the ‘wrong’ thing.

And it’s this vein of fashion feminism that makes Florence, a middle-class girl from Oxford, such an inspiration to young women.

Though I’m five years her senior, I still dream of one day dressing like her. She wears the kind of fabulous outfits I fantasised about as a teenager. But unlike so many of us, she never gave up this childlike desire to dress up. 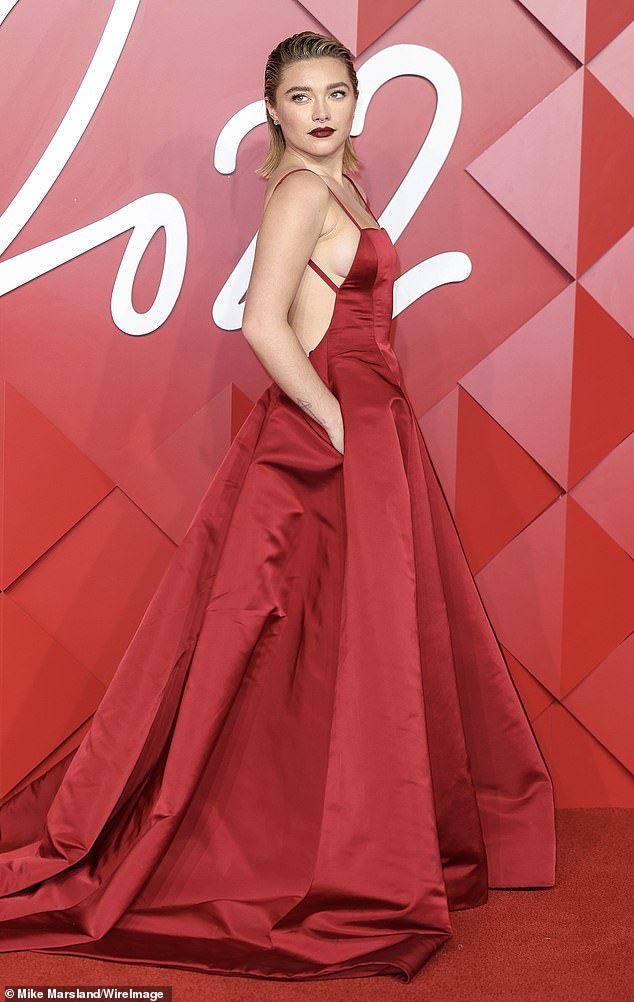 Dramatic: The acting talent wowed in a satin red Valentino dress at the British Fashion Awards earlier this month 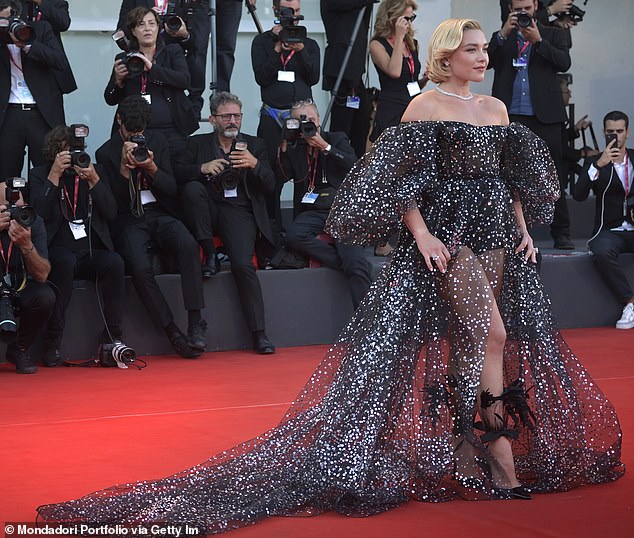 Dazzling: The actress attended the Venice Film Festival in September in a sparkly, puff-sleeved Valentino dress with feathered shoes

Fashionista: The stylish star looks fabulous in satin and sparkles outfits as she attends the most glamorous events

Designers clearly love her, too. She’s worn outfits by a host of top names, from Prada to Emilia Wickstead, a favourite of the Princess of Wales, and made appearances on the front row of various fashion shows.

That’s not to say everyone is a fan, of course. Her style choices have not been without controversy, but the barbs she’s faced have never reflected badly on the clothes, or on Florence herself — only her critics. And the actress isn’t afraid to confront them face on.

Who can forget the response to that Valentino dress? Hot pink and high-necked, the sheer fabric showed her bare breasts underneath. Young women cheered her bold sartorial choice. Others did not.

The vitriolic trolling Florence received in response to the sight of her nipples, from men who seemed to think her pink Barbie look meant she should have the impossible figure to match, prompted her to pen an impassioned response on Instagram.

She wrote: ‘What’s been interesting to watch and witness is just how easy it is for men to totally destroy a woman’s body, publicly, proudly, for everyone to see. So many of you wanted to aggressively let me know how . . . I should be embarrassed by being so “flat-chested”.’ 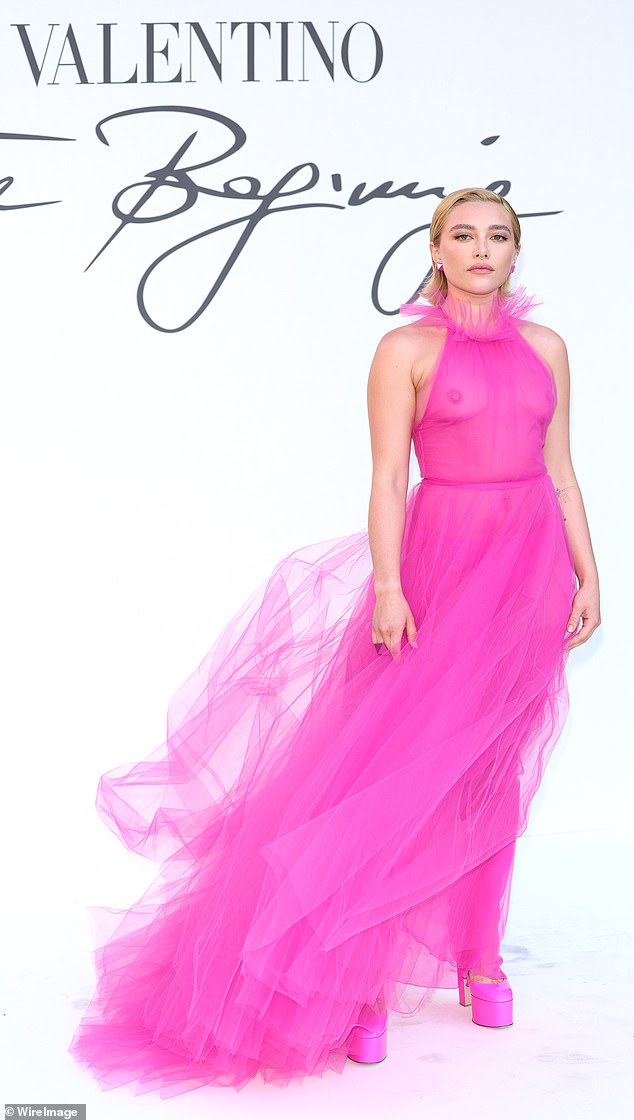 Unforgettable: The talent caused a stir in a hot pink, high-necked Valentino gown at the designer’s haute couture show in Rome in July

Chic: She sported a pink dress and white Valentino cape for Paris Fashion Week, partnered with a pair of white platforms

So, would she be amending her future clothing choices? Not one bit. ‘I’m happy with all of the “flaws” that I couldn’t bear to look at when I was 14. I’ve lived in my body for a long time. I’m fully aware of my breast size and am not scared of it . . .

‘It has always been my mission in this industry to say “f*** it” whenever anyone expects my body to morph into an opinion of what’s hot or sexually attractive.

When I saw Florence’s response, I wanted to hug her. The easiest course of action would have been to ignore the cruel comments, and maybe even adjust her wardrobe. Instead, she addressed her critics head on — and by doing it in her own voice, unsanitised by PRs, it didn’t feel like she was just defending herself, but all the women who follow her.

Then, to prove she hadn’t backed down, she wore a glorious sheer, sequin-embellished Valentino two-piece a few weeks later, nipples once again on display. No one was going to shame her into hiding herself.

Florence knows she doesn’t have anything to prove. She’s an incredible, serious actor but she lets her performances speak for themselves — she doesn’t need to remind us of the fact on the red carpet. She’d rather have fun with her clothes.

She enjoys a magical synergy with her stylist, Rebecca Corbin-Murray, that sees her put her own spin on big trends — opera gloves, hot pink, bra tops, feathers and platforms, to name but a few — without feeling like she’s being led by them. She doesn’t need to cover up — instead she can be fiercely herself.

Her outfits are so captivating because of the attitude with which she wears them. And while I love them all, I don’t think she’d care one iota if I wrote that I hated them — and that’s why she won over young women like me in 2022.

From rock to folk & more