Why is NASA crashing a spacecraft into a harmless asteroid at 14,000mph? | Science & Tech News 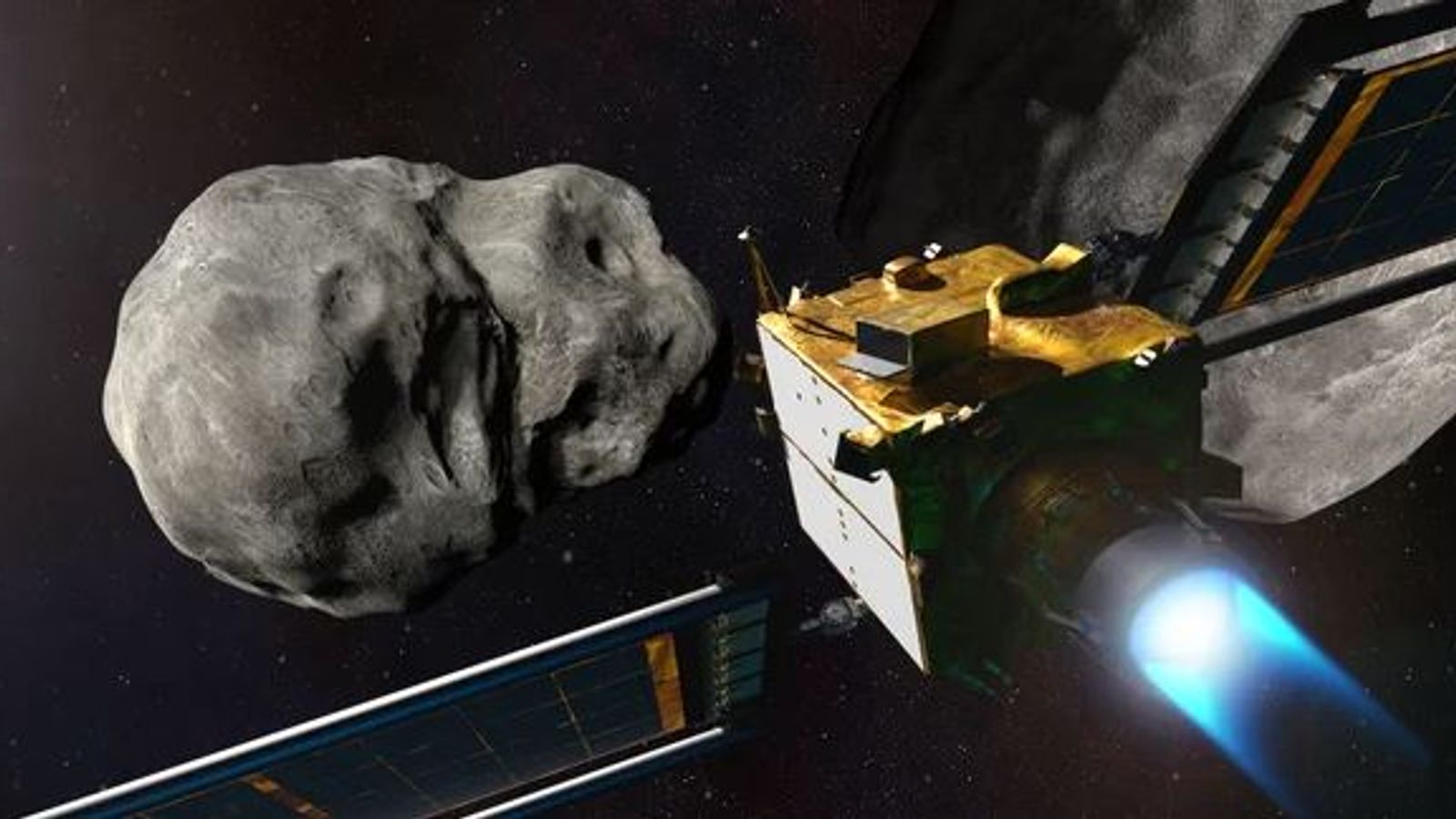 A harmless asteroid millions of miles away is about to be rammed by a NASA spacecraft at 14,000mph. Why? The fate of the human race could one day depend on doing the same.

It has been 66 million years since an asteroid crashing into the Earth brought an end to the reign of the dinosaurs, scientists say, and they are keen to avoid a similar ending for humanity.

Sky News takes a look at NASA’s latest experiment – a $325m (£301m) planetary defence test – and answers some key questions about how it could prove useful down the line.

What is the Dart spacecraft?

Dart – a snappier nickname than Double Asteroid Redirection Test – is essentially a battering ram the size of a small vending machine.

It faces certain destruction in the fulfilment of its goal.

Dart weighs 570kg and has a single instrument: a camera used for navigating, targeting and chronicling its final demise.

Where is the spacecraft going?

Dart is headed for a pair of asteroids about seven million miles from Earth. Its target is called Dimorphos, which is the smaller offspring of Didymos (that’s Greek for twin).

Dimorphos is roughly 525 feet (160 metres) across and it orbits the much larger Didymos at a distance of less than a mile (1.2km).

NASA insists there’s a zero chance either asteroid will threaten Earth – now or in the future. That’s why the pair was picked.

The spacecraft’s navigation is designed to distinguish between the two asteroids and, in the final 50 minutes, target the smaller one.

What happens on impact?

“This really is about asteroid deflection, not disruption,” said Nancy Chabot, a planetary scientist and mission team leader at Johns Hopkins University, which is managing the effort.

Instead, the impact will dig out a crater metres in size and hurl some two million pounds of rocks and dirt into space.

Why are scientists doing this?

The impact should be just enough to nudge the asteroid into a slightly tighter orbit around its companion space rock – demonstrating that if a killer asteroid ever heads our way, we’d stand a fighting chance of diverting it.

Cameras and telescopes will watch the crash, but it will take months to find out if it actually changed the orbit.

Observatories will track the pair of asteroids as they circle the sun, to see if Dart altered Dimorphos’ orbit.

In 2024, a European spacecraft named Hera will retrace Dart’s journey to measure the impact results.

Although the intended nudge should change the moonlet’s position only slightly, that will add up to a major shift over time, according to Ms Chabot.

“So if you were going to do this for planetary defence, you would do it five, 10, 15, 20 years in advance in order for this technique to work,” she said.

Newborn among 7 dead in landslide on Italy’s Ischia island