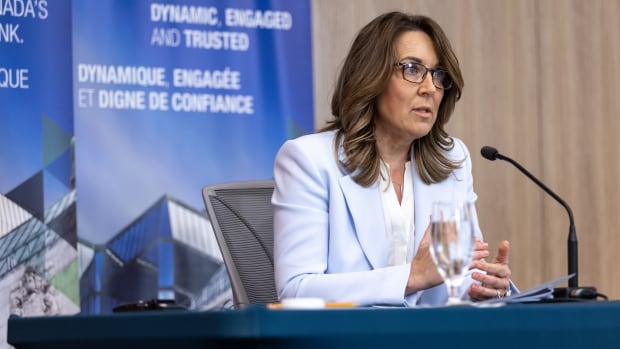 After some jumbo-sized interest rate hikes, there are likely a lot of Canadians who would like the Bank of Canada to just quit it already.

Many in the real-estate business, some who want to lend you money or sell you investments, would be pleased if we all agreed that recent central bank rate hikes were a blip and that the world was going back to the rock-bottom interest rates that helped make businesses profitable.

But as Canadians wait for Wednesday’s Bank of Canada decision on whether or how much to raise interest rates, there are voices advising caution. While there are many who would benefit, at least in the short term, if rates stayed near their recent lows, according to others that’s just wishful thinking.

In fact just last week, one of the people influential in setting North American interest rates used that very expression.

Exactly how high rates will go, she said, will depend on the path of inflation. As we’ve seen over the past two years, with the exception of a few contrarian analysts, neither markets nor central bankers have been good at predicting that path.

While the Bank of Canada ostensibly sets its interest rates independently from the U.S. Federal Reserve Board, in North America’s integrated economy the same forces are at work. Diverging too far from U.S. rates affects the relative price of the loonie, hurting exports if it goes too high or leading to U.S. cries of protectionism if it falls too low.

Current projections for Wednesday’s rate hike by economists are all over the map, but the consensus before the Labour Day weekend was that Canadian central bankers would hike rates by another of three quarters of a percentage point to 3.25 per cent, with subsequent hikes of one quarter of a percentage point.

WATCH | Half of Canadians can’t keep up with cost of living, survey says:

56% of Canadians say they can’t keep pace with high cost of living, according to survey

Monday, August 22- Over half of Canadians say they can’t keep pace with the current cost of living, according to a survey released Monday by the Angus Reid Institute. We’ll talk to one woman about the cost-cutting measures she uses to feed her family.

As anyone looking to borrow money will have discovered, the rates you pay are considerably above the rate set by the central bank. Canada’s prime rate, the borrowing cost for a bank’s best customers, is currently 4.7 per cent. At a central bank rate of four per cent, the amount you pay for a loan would likely be well over six per cent.

In Wednesday’s rate release and at a Thursday press conference with Senior Deputy Governor Carolyn Rogers, expect to hear an echo of Mester’s promise of data dependence. In other words, rather than telling us how the future path of rates will unfold, the central bank could only commit to watching inflation indicators as they come in before deciding each new move.

Of course, it is not just the data but how it is interpreted. At the end of this week one indicator that will be both telling and fresh is Canada’s jobs data, when Statistics Canada releases the Labour Force Survey on Friday morning.

U.S. jobs numbers out on the Friday before the long weekend are still being interpreted as either a glass half full or one half empty. U.S. job creation was down but still strong. The unemployment rate was marginally worse at 3.7 per cent but wages continued to climb as employers struggled to fill jobs.

Jean-Paul Lam, a University of Waterloo economist whose specialty is inflation, said he expects wages to continue rising in Canada, too.

“Coupled with the decline in the labour force participation rate, which started well before the pandemic, it looks like, at least in the short-run, there will be pressure on wages to continue to rise,” said Lam in an email interview. “These wage increases, beyond two per cent, will continue to put pressure on prices.”

While some say fears of a wage-price spiral have been overblown, there are widespread calls for wages to catch up to prices and profits that have continued to soar.

Lam said he’s convinced central banks in Canada and the U.S. will be good to their word, continuing to slowly raise interest rates until inflation has returned to the two per cent range. The alternative is to incite even higher wage demands as employees watch themselves fall further and further behind.

Early claims that rate hikes by the Bank of Canada could not affect global commodity prices may have been true if you thought only Canada was raising rates. But Canada is not alone in trying to battle inflation, and last week’s tumbling price of oil was at least partly blamed on a concerted effort by the world’s most influential central banks to suppress demand.

“Although strains in the supply chains have eased on the international front, there are still significant issues with the global supply of goods,” said Lam. “China is one COVID wave away from shutting down critical parts of its economy again, the war in Ukraine is far from over, and the shortages in many raw materials, especially essential inputs such as semiconductors, continue.”

WATCH | Why Calgarians are calling for rent control:

Rentals.ca says cost of one-bedroom suite up 27 per cent compared with last August.

The fact that central banks have had so much trouble staying ahead of inflation is a gauge of the uncertainty about what causes it. In an interview, BMO economist Doug Porter noted that fiscal spending is off the boil since the COVID spending peak, but with U.S. midterms around the corner and the possibility of a federal election ahead, don’t expect painful austerity.

Growing government revenues show there is no shortage of cash even without “money printing” by central banks, that are now actually cutting back on bond sales. However, even as house prices fall, home loans and the money they inject into the Canadian economy are continuing. Rents are still rising, said Porter. With borrowing costs for large corporations still below the current inflation rate, money remains cheap.

According to Porter, central banks don’t really have to keep cutting interest rates just because inflation is above two per cent. They simply have to be “convinced that the conditions are in place for inflation to recede further,” he said. But he said he thinks that time is not yet.

“I think it is way too early to be declaring any kind of victory over inflation, and too early to be saying definitively that rate hikes are going to end soon,” said Porter.