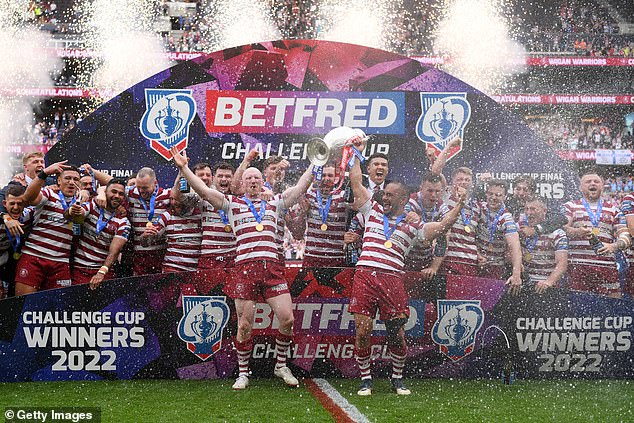 A touch of class and a natural finisher – so often the difference between success and failure.

Harry Smith provided the former and Liam Marshall once again proved he is the latter as Wigan Warriors claimed a record-extending 20th Challenge Cup.

Huddersfield, who last lifted rugby league’s oldest and most famous trophy in 1953, fought admirably from start to finish at the Tottenham Hotspur Stadium.

You knew they would under their impressive head coach Ian Watson, who has fashioned the Giants side into a respected force this year.

Wigan Warriors have won the Challenge Cup for the 20th time, but it is their first in nine years 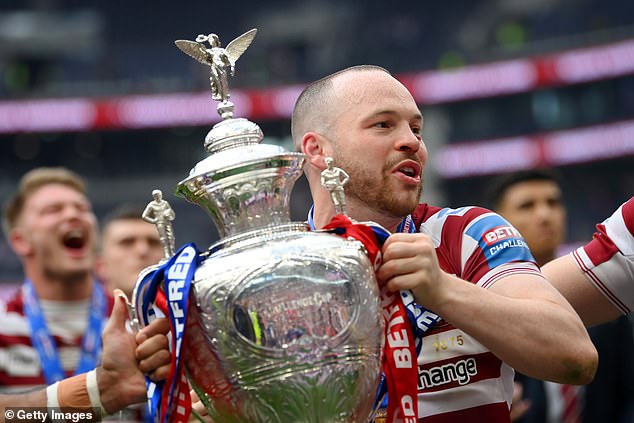 At this level, though, a moment of genuine quality often tells and it did so here in the 77th minute in the most dramatic fashion.

When Wigan scrum-half Smith collected possession inside Huddersfield’s half, he kept his composure to send a delightful kick into the left corner, where predatory winger Marshall arrived at pace to ground the ball.

Cur delirium in the Wigan stands and devastation among the Huddersfield hordes in the 51,628 crowd.

Missed kicks did for Huddersfield in the end – full-back Tui Lolohea faltered with four of his five attempts at goal and was made to pay in the end.

Huddersfield led inside the third minute when Lolohea kicked a penalty and in the 13th minute it took an excellent piece of defensive work from Smith to prevent Huddersfield scoring. 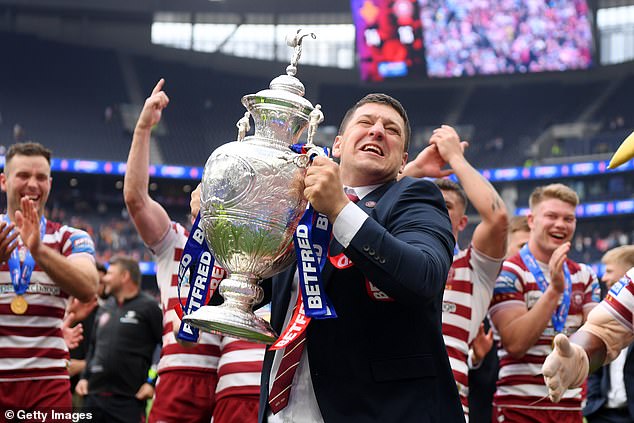 Lolohea sent a clever kick behind the Warriors’ defence and scrum-half Oliver Russell was in a footrace with opposite number Smith to reach the ball in the in-goal area.

Smith just about managed to get there first to palm Lolohea’s kick to safety at the expense of a goal-line drop-out.

Sure enough, their pressure told in the 16th minute when a neat handling sequence from a ruck found Ricky Leutele inside the left channel.

The centre arrived at pace and held off Iain Thornley’s challenge to crash over in the corner.

Lolohea hit the outside of a post with the conversion attempt and the Giants were dealt a major blow soon after when Chris Hill was hurt in a tackle. 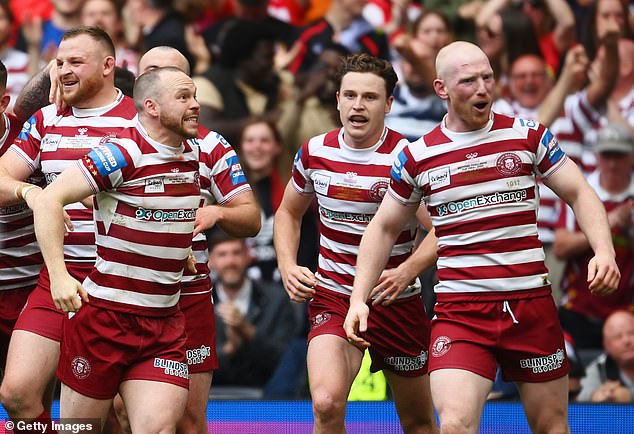 He had sustained a painful leg injury and had to be helped off the field in a major blow to Huddersfield.

The loss of the 34-year-old prop, a two-time winner of the Challenge Cup with Warrington Wolves, certainly prompted a momentum shift as Wigan began to make inroads in their opponents’ half.

Shortly after the Warriors forced Huddersfield into a goal-line drop-out, they breached their line when stand-off Cade Cust found Morgan Smithies inside the left channel.

Loose forward Smithies, a born and bred Yorkshireman, produced a deft pass to the onrushing Smith, who dashed over the line to score.

Smith added the conversion to level matters at 6-6 but Huddersfield roused themselves and scored a second try to lead 10-6 at the interval.

After Jermaine McGillvary was denied in the right corner, the Giants continued to probe and were rewarded in the 34th minute. 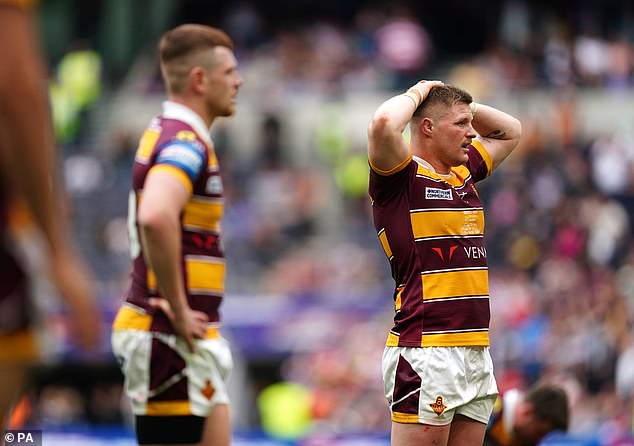 This time, Jack Cogger found Lolohea and his pass sent McQueen – who won the Lance Todd Trophy as man of the match – inside the right channel.

The imposing Aussie second-rower showed impressive footwork to dummy his way past Jai Field and Ethan Havard before diving over the line.

Once again, though, Lolohea failed to convert, leaving the Giants just four points ahead at the interval.

Three minutes after the restart, Wigan fashioned a devastating move which drove a knife through the heart of Huddersfield’s defence.

Thornley found Bevan French on the right-hand touchline and he showed impressive speed to race down the flank and then intelligence to find Field with a perfect inside pass which sent the Australian full-back over the line. 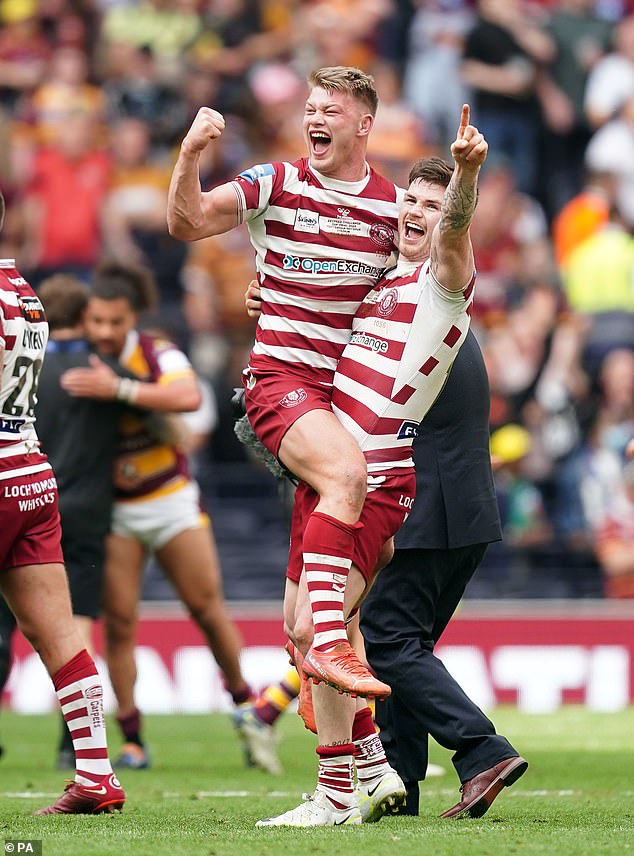 Smith converted to make it 12-10 and put Wigan ahead for the first time.

Lolohea’s misery with the boot continued in the 49th minute when he failed to convert a penalty.

A crossfield kick by Cust then forced McGillvary into a goal-line drop-out, but as the hour mark approached, Wigan forward Smithies conceded a costly penalty.

Smithies, having escaped punishment for an earlier high shot on Joe Greenwood, caught Leutele with a similar challenge. 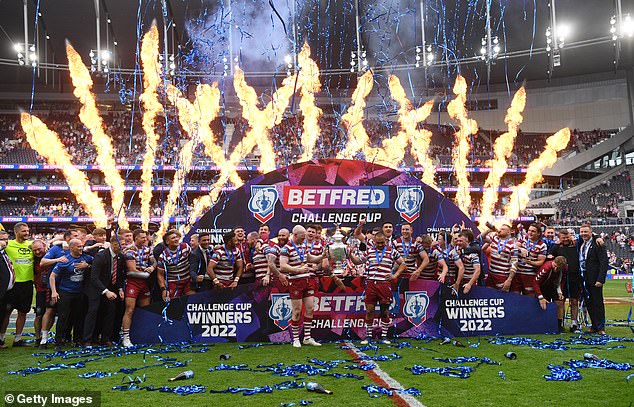 Referee James Child opted not to sinbin Smithies, much to the anger of the Huddersfield fans, but from the resultant penalty the Giants worked the ball out to the right flank.

Centre Leroy Cudjoe’s delightful offload found team-mate McGillvary and he pounced to score in the corner.

Once again, Lolohea faltered with the boot, leaving him with one goal from five attempts and the scores finely poised at 14-12 in Huddersfield’s favour.

It was an advantage they could not protect as Marshall’s predatory finish from Smith’s sumptuous kick delivered a killer blow.