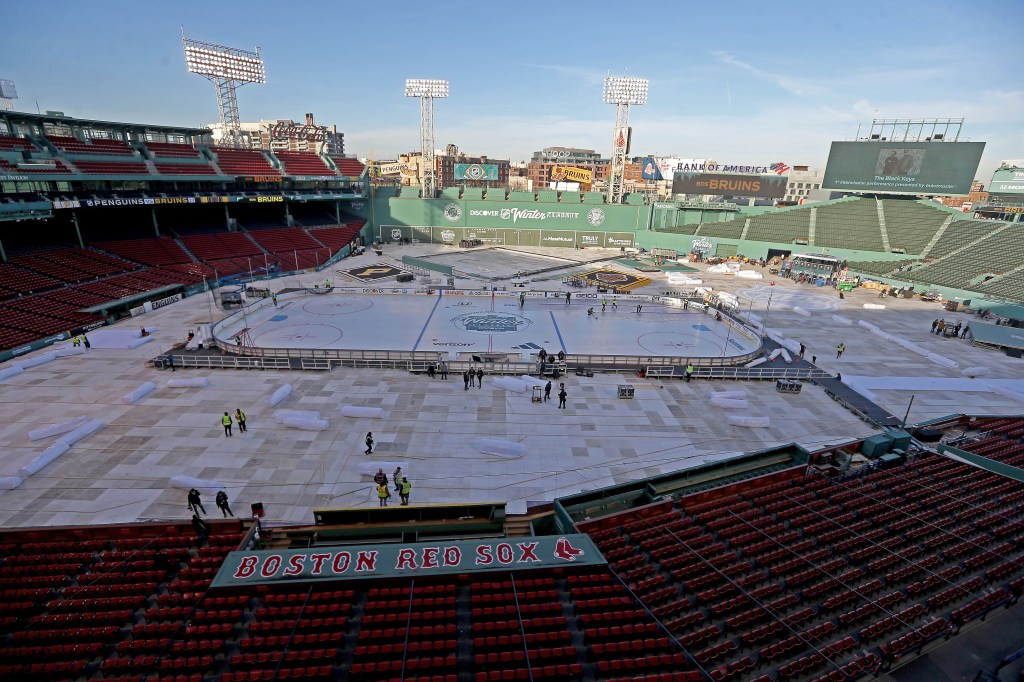 In 2010, the first time the Winter Classic was played at Fenway Park, the intended snow globe feel of the spectacle was in full effect as light flakes fell for the day-before practices as well as the alumni game on the day after the Classic, while the day of the game was seasonably chilly.

That is not what weather folks are predicting for Monday when the Bruins take on the Pittsburgh Penguins at the old ballpark on Jersey Street. The predicted weather predicted is much like it was on Thursday when Bruins Foundation president and alum Bob Sweeney did a media tour of the facilities – sunny and approaching 50 degrees.

Provided the ice holds up, it should be a more pleasant viewing experience for the people who’ll be in the stands. With the rink shifted to run parallel to the first base line, it should give more fans better sightlines, which is frankly a challenge in the 110-year-old park with its gently sloping lower bowl. And the rink should be almost completely enveloped in shade by game time, which should help with the ice conditions.

“I think it’s going to be a great spectacle for the TV viewers to have the Green Monster so prevalent in the background,” said Sweeney who toured the park on Thursday around 2 p.m., a little before the scheduled puck drop time on Monday. “Also, you can see just the way the sun is right now, it will be beneficial for an on-time start because of the way the rink is positioned. But I think the majority of the fans will have a much better view the way the rink is set up.”

Much like NBA players now approach the Christmas Day games, NHL players who get to play in the Classic savor the experience.

“I think anybody that gets to play in an outdoor game, they mark that on their calendar. I know our guys now, they’ve got Buffalo on Saturday and then the Winter Classic. Everyone wants to play in an outdoor game. I know myself when I was a kid, I skated on outdoor ponds forever. It was so fun,” said Sweeney. “Patrice (Bergeron), I’m sure was the same way back in Quebec as a young boy. I think this will be Patrice’s fourth (Winter Classic), some of the guys, this will be their third game. It’ll be a great opportunity to be little kids again on the ice.”

This will be the B’s fifth outdoor game, having played three previous Winter Classics (Fenway, Gillette Stadium and Notre Dame Stadium) as well as the unique, pandemic-induced experience of playing in the elements at Lake Tahoe.

Sweeney played in the 2010 alumni game at Fenway, an experience he cherishes.

“In 2010, the NHL came in a lot earlier than they did this year. It was a magical couple of weeks,” said Sweeney. “I remember we had a little parade leaving the Garden ending up here at Fenway Park with the likes of Bobby Orr, Milt Schmidt, to name a few, along with guys from my generation. We had a Break the Ice event. Then to be able to play on this ice after the Bruins played the Flyers, it was awesome. It was snowing that afternoon. It was a great afternoon. I think we had over 33,000 people here, which was a great testament to everyone wanting to see hockey here at Fenway.”

While there is no alumni game scheduled this year, Sweeney and some alumni will be holding a Fantasy Camp type of event on Jan. 4 (the campers have been selected).

The Bruins Foundation will also be partnering with the NHL’s Legacy Project, the Red Sox and the Martin Richard Foundation to help build a new Boys and Girls Club in Dorchester. Martin Richard, a Dorchester native, was one of the victims killed in the 2013 Boston Marathon bombing.

“They will begin construction (of the Boys and Girls Club) right around the 10th anniversary of the marathon bombing,” said Sweeney. “We’re fortunate to call the Martin Richard Foundation a great partner of the Bruins Foundation. I think everyone’s excited. We’ll have a little street hockey clinic at the current Boys and Girls cub on Saturday morning. And all the funds raised in the 50/50 will go to the Martin Richard Foundation.”

Risk of a dangerous new Covid variant in China is ‘quite low,’ U.S. health expert says