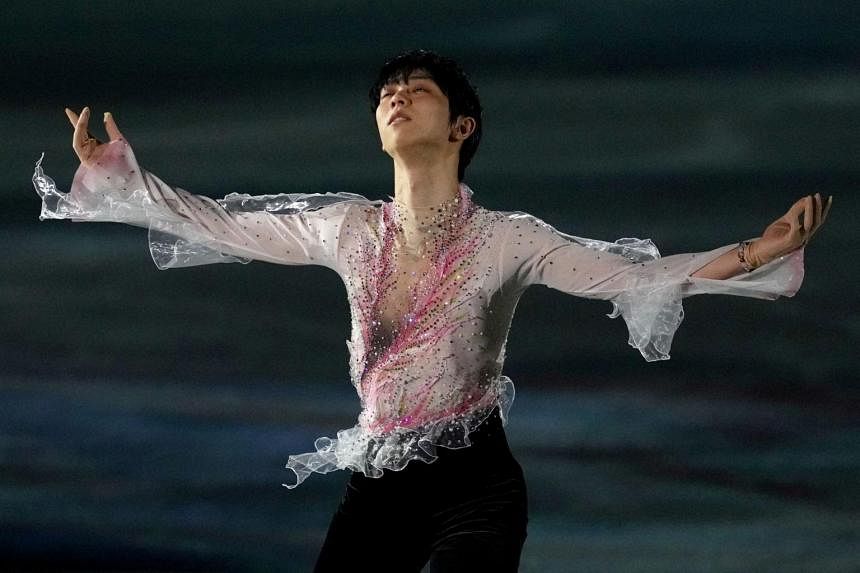 TOKYO (AFP) – Japan’s two-time Olympic figure skating champion Yuzuru Hanyu announced his retirement from competition at the age of 27 on Tuesday (July 19), after struggling with injuries at this year’s Beijing Games.

“I’ll no longer be compared with other skaters as a competitor,” the “Ice Prince” told a packed press conference in Tokyo, saying he will concentrate on skating in exhibition shows for his adoring fanbase.

After winning his first men’s individual Olympic gold medal aged 19 at the 2014 Sochi Games, Hanyu became the first man in 66 years to retain his crown when he again stood atop the podium at Pyeongchang 2018.

He also claimed the world title twice but his impact on figure skating goes far beyond just medals.

With his elegant style and delicate, boyish looks, Hanyu inspires devotion like few other athletes in world sport.

His supporters, known as “Fanyus”, follow his every move, spend fortunes watching him compete and even carve sculptures of the rake-thin star, who is known as “Yuzu” to his devotees.

They also shower the ice with Winnie the Pooh toys after his routines, in a chaotic tribute to the tissue box cover he carries to the rink with him.

“The way he looks and his technique and the effort he puts in – no one else will have that total package,” 46-year-old fan Yumi Matsuo told AFP earlier this year.

“I’m really happy that I’m alive at this time so that I can support him.”

Hanyu has been at the top of men’s figure skating for almost a decade.

He began skating as a child in his native Sendai, in Japan’s northeast. When the massive earthquake and tsunami hit the region in 2011, he was practising on the ice and was forced to flee the rink on his skates.

Hanyu makes a point of honouring the victims of the disaster and he dedicated his first Olympic title as “a gift for my country”.

“I’m the only gold medallist but I don’t think I’m just spiritually by myself, I’m here because of all the people in Japan who supported me,” he said after his Sochi gold.

Hanyu went on to win world titles in 2014 and 2017, breaking records with jaw-dropping scores, as he and American rival Nathan Chen battled it out for skating supremacy.

Hanyu had to overcome an ankle ligament injury to win his second Olympic gold in Pyeongchang, admitting afterwards that he was at barely a quarter of full fitness.

His second title earned him a place in skating immortality and cemented his hero status in Japan, where he became the youngest recipient of his country’s prestigious People’s Honour Award the same year.

Injuries dogged him later in his career and hampered his bid this year to join 1920s star Gillis Grafstrom of Sweden as the only other man to win three Olympic singles titles.

He fell in his short programme at the Beijing Olympics and placed fourth overall, revealing afterwards that he had pain-killing injections before taking the ice.

He said he “did everything” but felt that “everything has gone wrong this time around”.

Eventual winner Chen paid tribute to Hanyu as “the greatest skater ever”.

“Watching him when I was a kid, I never even dreamed that I would be able to have the opportunity to even skate with him,” said the American.

Hanyu refused to rule out another tilt at the Olympic title immediately afterwards and said that he was determined to land the quadruple axel, a legendary jump that no skater has ever pulled off in competition.

Tuesday’s announcement ends a competitive career unlike any other in skating history, leaving his fans in shock and disbelief at the news.

Hanyu still remains something of an enigma despite the huge attention, rarely granting interviews and having no social media presence.

But it is all part of the appeal for his devoted supporters, who will still be able to watch him perform in exhibition shows.

For Hanyu himself, his achievements are etched into skating history.

“I’m an Olympic champion – I won two titles in a row and I’m proud of that,” he told reporters in Beijing in February.

“As someone who has won two consecutive titles, I want to make sure I’m proud of myself, and that’s how I intend to live my life from here on.”

So THAT’S Why Some People Have More Earwax Than Others