With pediatric ERs overwhelmed, where can Quebec parents turn if their children are sick? 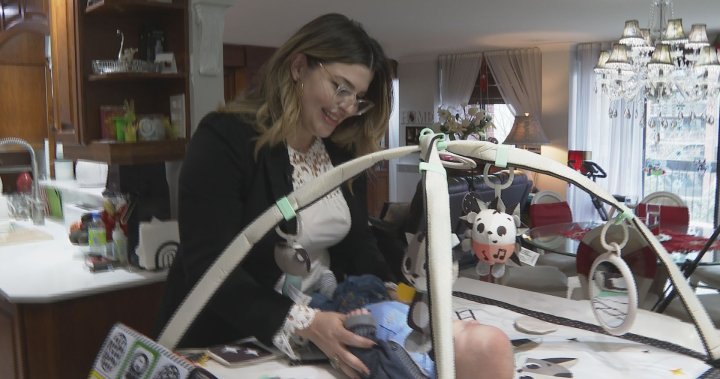 Anna Belmonte’s eight-week-old son was born premature, but like many Quebecers, Francesco doesn’t have a family doctor or a pediatrician. So when her son fell sick a few weeks ago, Belmonte immediately brought him to the Montreal Children’s Hospital.

After a five-hour wait, a doctor told her he had nasal congestion and it would clear up soon.

But when it didn’t, and she wanted a second opinion, she didn’t know where to turn.

“I have a family doctor but he refuses to take the baby as a patient, which I totally understand because he says he doesn’t specialize in pediatrics,” said Belmonte. “In our province, it’s ridiculous to get a doctor, to be seen by a doctor.”

The first-time mother stumbled upon KixCare. It’s a way for parents to get a quick appointment with a pediatrician.

Co-founder Dr. Harley Eisman, who is also the medical director of the Children’s Clinic, says Kixcare was founded in the midst of the pandemic.

“A lot of pediatrics is just really advice giving and observation,” he said. “So if you can do it in the comfort and safety of your own home, then it’s a win-win for everybody.”


The tele-medicine service can also be seen as an alternative as pediatric ERs continue to be overwhelmed.

Eisman says 811 is another good option for parents.

If you do not have a family doctor — you can dial 3 to access the primary care access point — known in French as the Guichet d’accès à la première ligne (GAP).

But whether your child has a doctor or not, you can dial 1 to access a priority line available to all children 17 years old and under.

The average wait time is usually about 30 minutes, though that can vary during peak hours.

“Most of the time — more than half of the time (the nurse) is going to refer the patients to the pharmacy or self-care — nasal hygiene or Tylenol,” said said Dr. Ariane Murray, a family doctor and head of Montreal’s regional department of general medicine. “Then they’ll tell you, for example, if it’s not better within 24-48 hours and if we need, we’ll send you for an appointment with a family doctor.”


Murray noted, however, that the priority line isn’t available everywhere in Quebec. It is currently available in Montreal, Montérégie, Laval, Lanaudière and the Laurentians.

She says the province is working on having the line accessible to everyone.

Doctors say though the viruses that are currently circulating are heavy, most are treated at home and without antibiotics.

Eisman says parents should follow their gut, but noted things to look out for include:

Overall, health experts say to sit tight and try to use telemedicine options or 811, before seeking in-person medical attention.