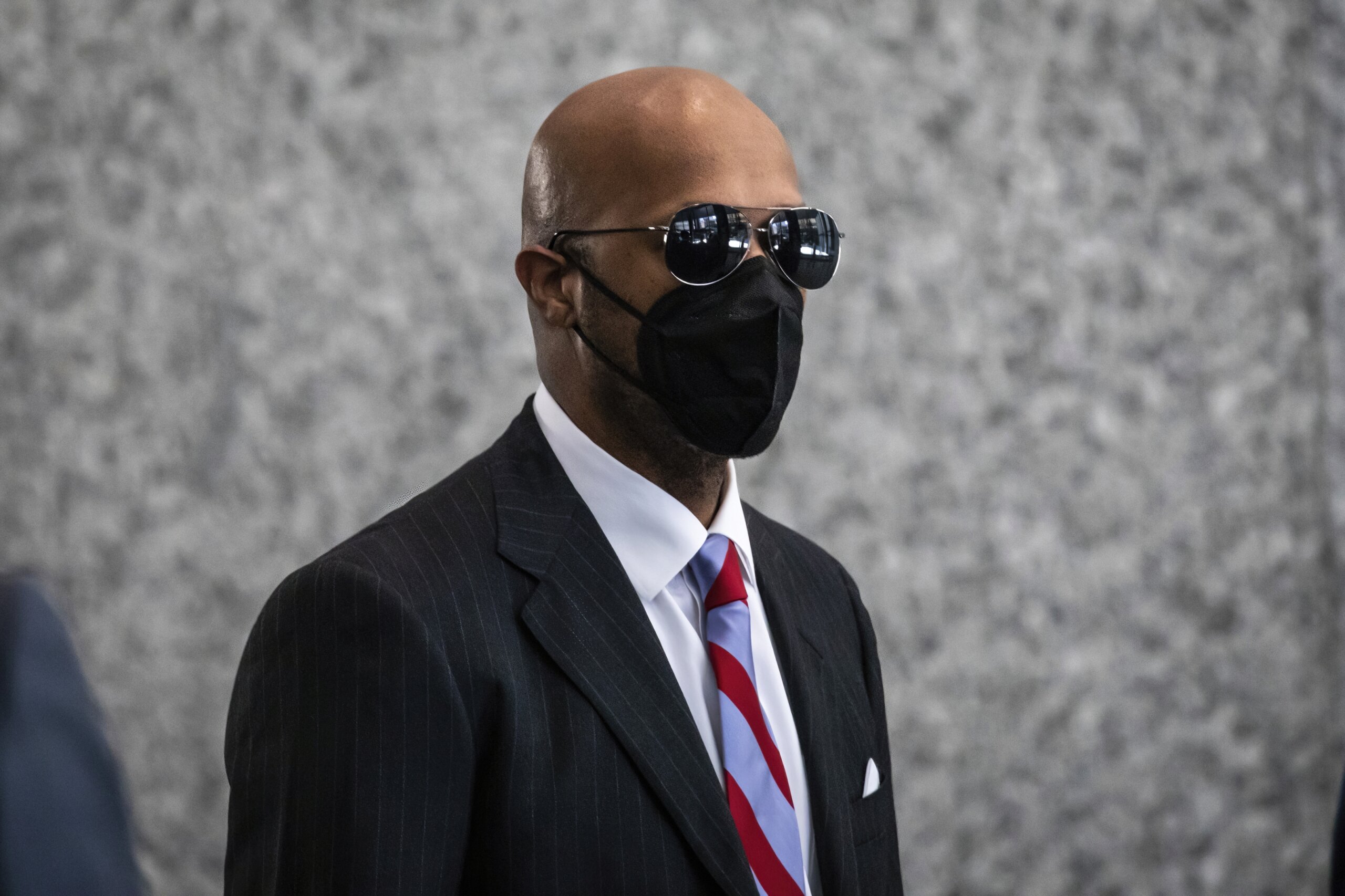 A woman who has been central to R. Kelly’s legal troubles for more than two decades testified Thursday that the R&B singer had sex with her “hundreds” of times before she turned 18 years old, starting when she was just 15.

CHICAGO (AP) — A woman who has been central to R. Kelly’s legal troubles for more than two decades testified Thursday that the R&B singer sexually abused her “hundreds” of times before she turned 18 and that it was her and Kelly in a videotape that was at the heart of his 2008 child pornography trial, at which he was acquitted.

Jane — the pseudonym for the now 37-year-old woman as she testified — paused, tugged at a necklace and dabbed her eyes with a tissue as she said publicly for the first time that the girl in the video was her and that the man was Kelly.

When the prosecutor asked how old she was at the time, she said quietly: “14.” Kelly, 55, would have been around 30 years old at the time.

In addition to charges of child pornography and enticement of minors, Kelly faces charges of conspiring to rig that 2008 trial by intimidating and paying off the girl to ensure she didn’t testify then.

Some jurors who presided over that 2008 trial, which was on state charges, said that they had no choice but to acquit the R&B star because the girl — by then an adult — didn’t testify. On the stand Thursday, Jane conceded that she lied to a state grand jury in 2002 when she said that it was not her in the video.

“I was afraid something bad would happen to Robert,” she told jurors about why she didn’t tell the truth then, referring to Kelly by his full first name. “I was protecting him.”

She added there was another reason she lied about the identity of the person in the video. “I also did not want that person to be me,” she told jurors. “I was ashamed.”

Dressed in a white dress coat and removing a face mask before testifying, Jane remained on the witness stand for over four hours for the government. Kelly’s attorney was scheduled to get her chance to cross-examine Jane starting Friday morning.

A prosecutor asked Jane toward the end of the day Thursday why she decided in recent years to begin speaking honestly about what happened with Kelly, who Jane said she continued to care for and sometimes live with into her 20s.

“I became exhausted living with his lies,” she answered. She added that federal prosecutors assured her she would not be charged with lying to authorities if she testified truthfully at this trial.

Earlier, Jane also became emotional when she was asked to explain why Kelly can be seen handing money to her in the video. She said it was a precaution against anyone accusing him of abusing a child if the video ever fell into the hands of authorities.

“If anyone saw the tape … he wanted it to appear as if I was a prostitute,” Jane said.

She described her parents confronting Kelly in the early 2000s about whether he was having sex with their daughter. Kelly dropped to his knees and begged her parents to forgive him, Jane testified. She said she later implored her parents not to do anything to get Kelly in trouble, telling them she loved him.

As she spoke, Kelly mostly stared down at the defense table and rarely looked up at her. She, too, rarely looked in his direction.

Earlier, she testified that Kelly sexually abused her “hundreds” of times before she turned 18 years old, starting when she was 15. She said they were having oral sex in the video and that she was 14 at the time.

Jane told jurors that in the late 1990s when she was 13, she asked the Grammy award-winning singer to be her godfather because she saw him as an inspiration and mentor.

She said within weeks, Kelly would call her and say sexual things. She told jurors she was 15 when they first had intercourse.

Asked by a prosecutor how she would know what to do sexually, Jane answered, “He would tell me what to do.” Asked how many times they had sex before she turned 18, she answered quietly: “Uncountable times. … Hundreds.”

A federal judge in New York sentenced Kelly to a 30-year prison sentence this year for his 2021 conviction for using his fame to sexually abuse fans.

During opening statements Wednesday, prosecutor Jason Julien sought to prepare jurors for the testimony of accusers including Jane, reminding them that a core issue at trial remained the exploitation of often scared and confused children — even though the accusers who would speak to jurors are now grown adults.

Kelly’s lead attorney, meanwhile, implored jurors not to accept what she said was the prosecution’s portrayal of her client as “a monster,” explaining that because of intellectual challenges including illiteracy, Kelly was forced to rely on others as his career took off and was sometimes led astray by those close to him.

Speaking softly and tentatively when she first took the stand Thursday, Jane described her upbringing in a musical family in a Chicago suburb, including that she was home-schooled because she was in a touring musical group that she joined when she was about 12.

Jane first met Kelly in the late 1990s when she was in junior high school. She had tagged along to Kelly’s Chicago recording studio with her aunt, a professional singer who worked with Kelly. Soon after that meeting, Jane told her parents that Kelly was going to be her godfather.

Prosecutors have said Kelly shot the video of Jane in a log cabin-themed room at his North Side Chicago home between 1998 and 2000. In it, the girl is heard calling the man “daddy.”

In the early 2000s, an aunt of Jane showed her parents a copy of a video she said depicted their daughter having sex with Kelly. When they confronted Kelly, he told them, “You’re with me or against me,” a government filing says.

The parents took it as a threat.

Kelly, who rose from poverty on Chicago’s South Side to become a star singer, songwriter and producer, knew a conviction in 2008 would effectively end his life as he knew it, and so prosecutors say he conspired to fix that trial.

Kelly has been trailed for decades by complaints and allegations about his sexual behavior. The scrutiny intensified after the #MeToo era and the 2019 six-part documentary “Surviving R. Kelly.”

Kelly also faces four counts of enticement of minors for sex at the Chicago trial — one each for four other accusers. They, too, are expected to testify.

Two Kelly associates, Derrel McDavid and Milton Brown, are co-defendants. McDavid is accused of helping Kelly fix the 2008 trial, while Brown is charged with receiving child pornography. Like Kelly, they also have denied wrongdoing.