Woman sparks outrage for dancing on Mayan pyramid in Mexico 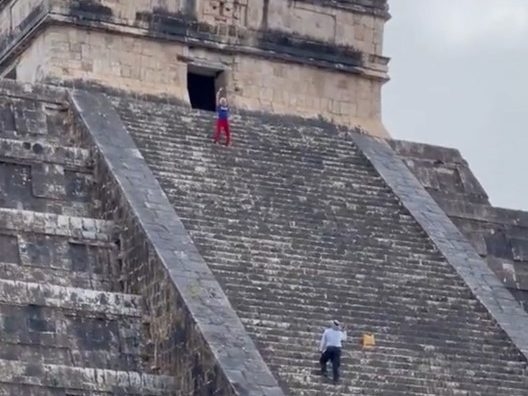 A woman was doused with water and faced insults and demands she be jailed after climbing to the top of an ancient Mayan pyramid in Mexico.

Scaling the pyramid at the Chichen-Itza archeological site has been banned since 2008 amid preservation concerns.

But that didn’t stop the woman from reaching the top, gyrating her hips and waving her arms in celebration as loud boos could be heard from stunned visitors to the site.

The woman, a Spanish national who many initially believed was a tourist, has since been identified as Abigail Villalobos of Mexico, according to local media, however the Tinum municipal police department would not confirm her identity, the Daily Mail reported.

A tourist was booed, doused with water and reportedly detained by police after climbing to the top of a Mayan pyramid at the Chichen-Itza archeological site in Mexico.

Climbing the pyramid has been banned since 2008 amid preservation concerns. pic.twitter.com/NyxH5yHZ0D

Villalobos reportedly walked up the steps of Castillo – or Pyramid of Kukulcán – in the Yucatan city of Tinum, then walked through one of the temple’s four terraces at the front of the steps before descending, all while dancing and posing for photos as an angry mob awaited her.

A security guard climbed up partway to escort the woman — now known to locals as “Lady Chichen Itza” — the rest of the way down where she was hit with water while one woman pulled her hair. People called her an “idiot” and chanted that she should be behind bars.

In 2016, Justin Bieber was kicked out of the Mayan ruins in Tulum, Mexico, after he allegedly brought a beer to the ancient site and stripped down to his underwear as he stood on a restricted monument while posing for pics with then-new-girlfriend Hailey Baldwin.

The National Institute of Anthropology and History (INAH) issued a statement a few hours after the video of Villalobos was posted on social media, noting that the monument had not been damaged.

She was taken to the Tinum municipal police station where she was briefly held before paying a 5,000-peso ($344) fine.