Women’s Euros: Karen Carney says England vs Sweden semi-final will be a nerve-shredder 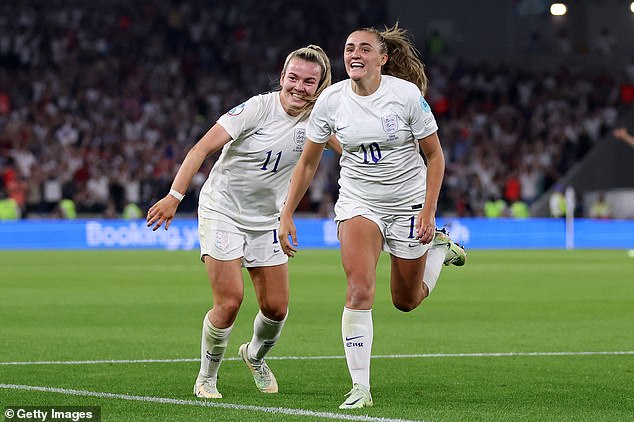 The nation must prepare to endure another nerve-shredding evening but Karen Carney believes England have the mindset and the momentum to reach the European Championship final.

The Lionesses must overcome Sweden at Bramall Lane on Tuesday night to reach Sunday’s showpiece final at Wembley, where either Germany or France would stand between them and glory.

Sarina Wiegman’s team have responded brilliantly to every challenge set before them so far in a tournament that has slowly captured more and more of the country’s imagination. 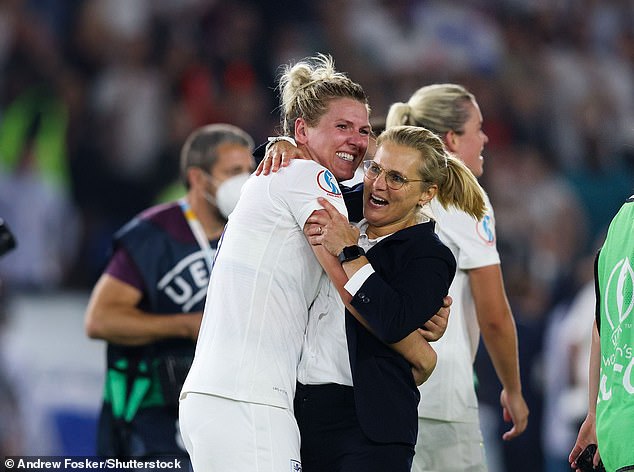 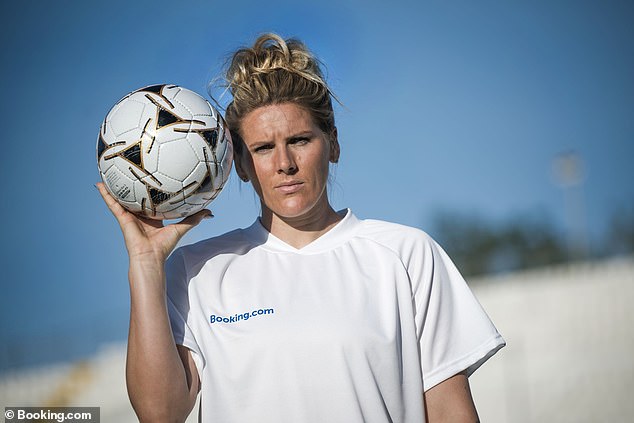 Chelsea and England defender Millie Bright is also an ambassador for Booking.com

While a group stage that saw them rack up 14 unanswered goals in three games was all about smashing records, England showed their resilience in coming from behind to beat Spain after extra time in a tense quarter-final.

Now they encounter a Sweden team ranked second in the world by FIFA but who haven’t played to their full potential so far during the competition and needed a stoppage-time winner to overcome Belgium last week. 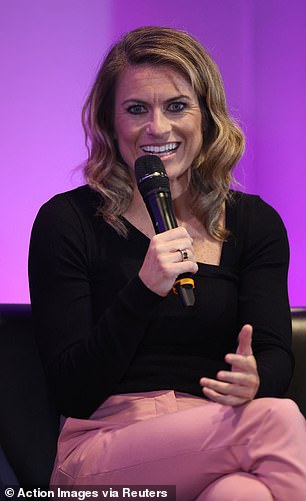 ‘I didn’t expect Sweden to blitz people off the park to be honest, that’s not their style,’ Carney told Sportsmail.

‘I actually tipped them to win the tournament if it wasn’t England.

‘They haven’t blown me away with their performances but what has made them so strong is their defensive organisation.

‘I think the teams that they have played haven’t suited their style and unfortunately playing England may suit their style a bit more.

‘Sweden are better when they have spaces to run into, when they have transitional spaces. England will dominate the ball so those spaces will open. We are an expansive team, we like to play with maximum width.

‘Millie Bright has been a revelation and Leah Williamson hasn’t really been tested yet – touch wood.

‘It’s going to be difficult to break them down but I think we have enough quality to get the result that we want.

‘I think we’re in for another very nervy one, even more so than against Spain!’ 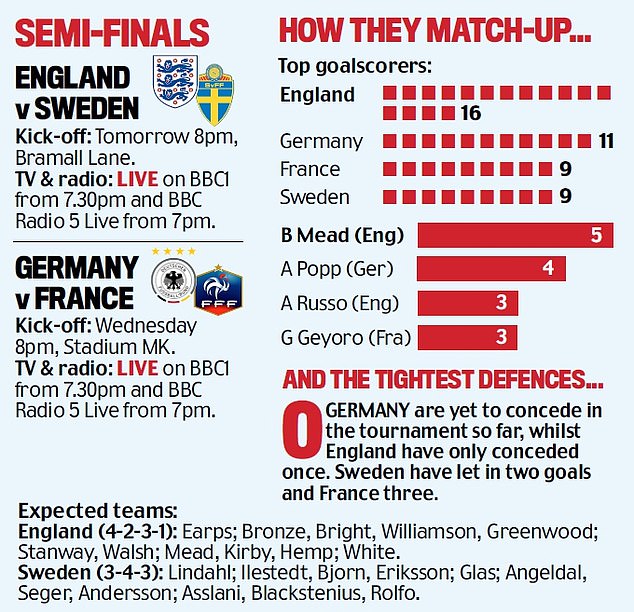 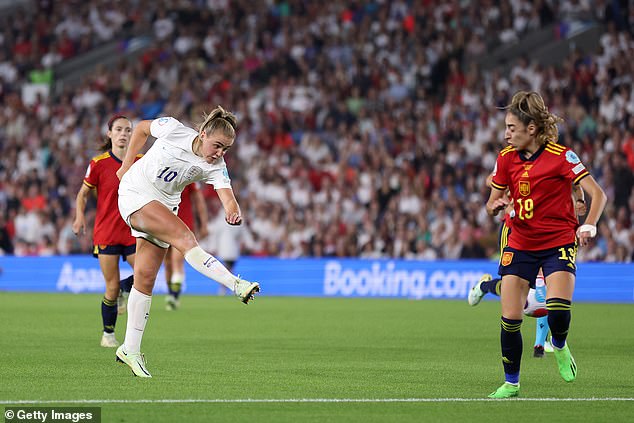 The turnaround against Spain owed everything to the incredible depth of quality in England’s squad and coach Wiegman’s bold substitutions in attack when they fell behind early in the second half.

The gamble paid off when Toone scored England’s leveller six minutes from time, before a stunning goal by Georgia Stanway won it during extra time.

‘Every manager wants to turn to their bench and if there is a problem, they want to fix it with a certain player,’ said Carney, who scored 32 goals in 144 games for England in a 14-year international career. 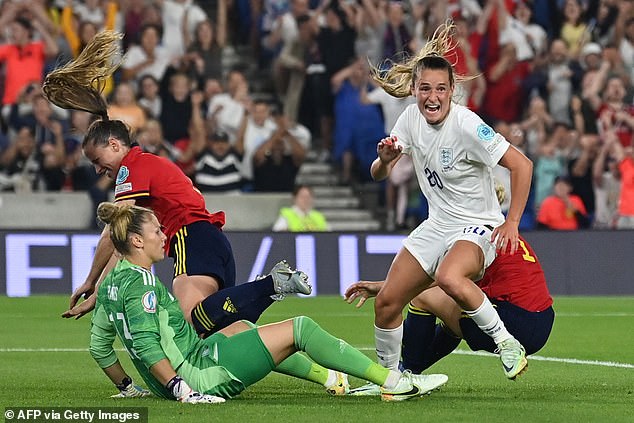 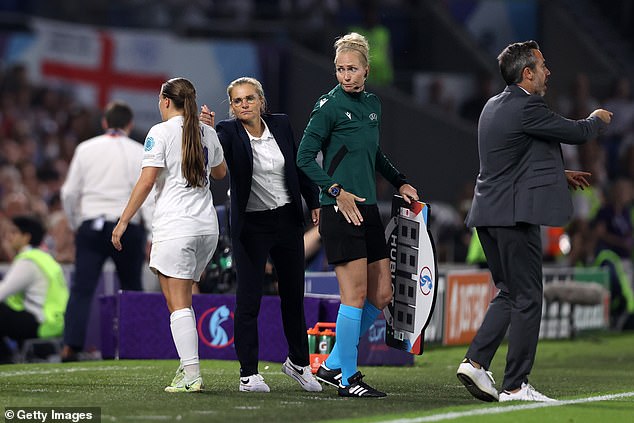 Wiegman was bold with her attacking substitutions, with Fran Kirby (left) one taken off

‘Pep Guardiola did that in the final game of the season [against Aston Villa] when they needed to come back to win the league.

‘He said he needed a player to do a specific role and he sent on Ilkay Gundogan. He turned to his bench and thought “that player gives me that” and it’s the same with Sarina.

‘But I don’t know why everyone is so surprised. If you are losing and you have a squad, you turn to your bench and put them on. If you keep doing the same things, you will get the same outcome.

‘If you are 1-0 down, you have got nothing to lose. You have a home crowd, you put on your attacking players and you go for it.

‘She has proven how to do it at the right time. Some people might freeze but there is no element of Sarina Wiegman freezing in those moments. She just does it and that is a credit for her.’ 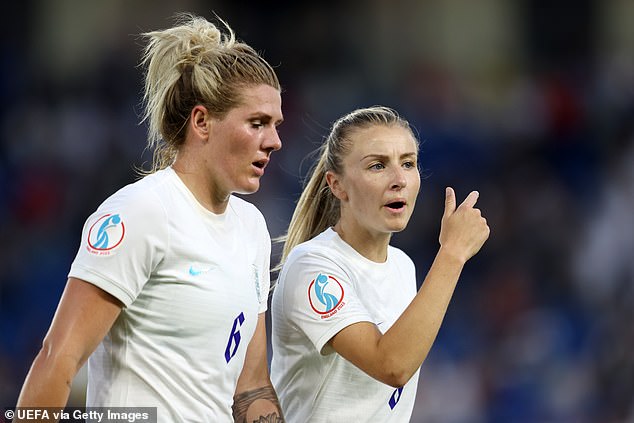 Wiegman may be tempted to reshuffle her forward line after the impact made by her attacking subs against Spain but Carney sounded a note of caution.

‘I think she will keep it the same. How I would flip it is to ask: “Would the starters make the same impact as the subs?”‘ she said.

‘So if Ellen and Fran were coming on, would they make the same impact? I don’t know.

‘What people seem to forget is the work Ellen and Fran do to tire out the opposition. Games only open up from 60 minutes plus at the top level.

‘So is there a reason to change what has been working for England? The younger players probably want to start but this opposition are very different and physical and we have to be mindful of that.’ 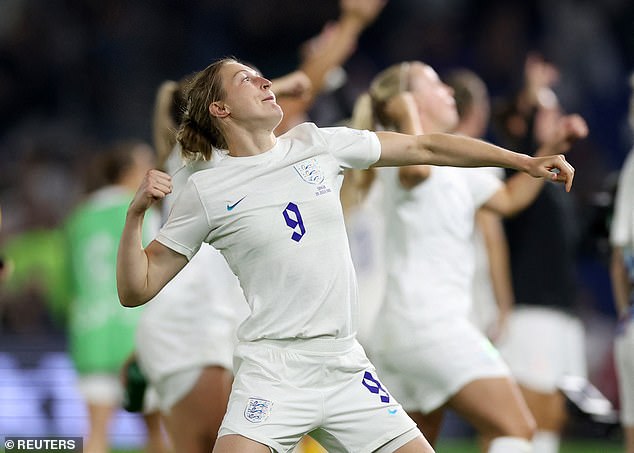 Much has been made of England’s apparent semi-final curse, having crashed out of the last three major tournaments at this stage.

In the 2015 World Cup, Laura Bassett’s stoppage time own goal left them heartbroken against Japan.

At the last Euros in 2017, they were beaten 3-0 by eventual winners Holland – coached by Wiegman.

And in 2019, their World Cup hopes were dashed by a powerful United States team.

Carney counters by pointing out that England did reach a European Championship final in 2009 after overcoming the Netherlands in the last four. Unfortunately, despite Carney scoring, they were overpowered 6-2 by Germany. 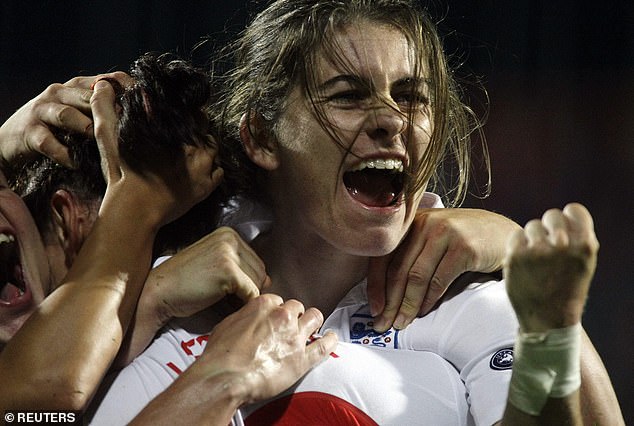 ‘So historically we have got to this stage and won to make it into a final. People are only looking at the last three back-to-back,’ she said.

‘Sarina won’t look back, she isn’t a manager who will look back. This is a new group with a new mentality and I really don’t see the relevance in looking back any more.

‘This team are smashing records and they look in a great place. I think you look forward, take each moment as it comes, stay process-driven and they have every chance of getting there.’

Carney was talking as research from Booking.com showed more than eight in 10 England fans (85 per cent) say the growth of the women’s game has made travelling to play professional football in top leagues around the world a realistic career ambition for women and girls.

Love Island SPOILER: Gemma fumes at ‘p***k’ Luca after he gets ‘annoyed’ at her IN sexy challenge